SLUG Mag Soundwaves
Episode #395 – Cotes
00:00 / 18:06
Spotify Stitcher
RSS Feed
Share
Link
Embed
An Undertaker-debut-at-Surivivor-Series-1990 entrance to the fans who came out and a Shockmaster-debut-at-Clash-of-the-Champions-XXIV to those who didn’t. 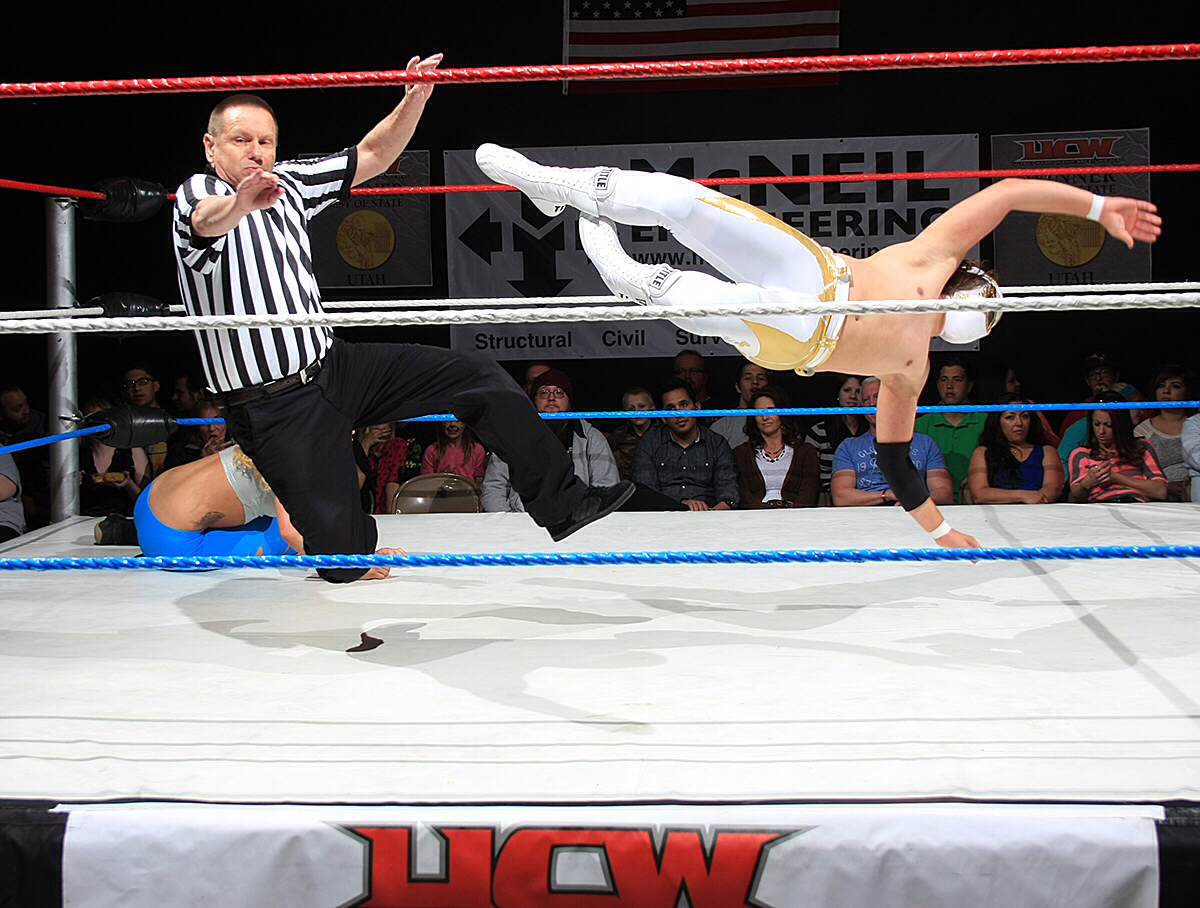 The setting was perfect thanks to the great taped vignettes between matches, an enthusiastic crowd (shout out to the s-mark middle schooler sitting in the front row! The dude knew his history!) and ring announcer Josh Damien’s joke about getting so loud, "even the Dark Angel can hear it." (It’ll make sense later). Yessiree, it was a bang up TV taping for the best pro wrestling promotions in all of Utah, UCW-Zero!

Lacey Ryan v. Durango Kid
The show began with a taped vignette in which Lacey Ryan cut a nasty promo on Durango Kid. She accused him of screwing her out of the Ultra-X Championship belt, belittled him as an inferior wrestler who the crowd only chants for out of pity and even boasted the fact that even after chairshotting beloved commissioner M.K. to the head, she still got cheered. Durango Kid approached the ring while the promo played, scratching his masked head while trying to make sense of Ryan’s accusations.

Lacey entered to an unfamiliar tune, a chorus of her former fans chanting "Lacey sucks!" in unison. Taking it in stride, she grabbed the mic from referee John Chase Earl, insisting that the last time he ref’d one of her matches, he overlooked her foot on the ropes as he counted 1-2-3. For this match, she was going to make a special adjustment and have … Stevie Slick call it!

This got the crowd heated as Slick swaggered in, gleefully proclaiming that he’d "call it down the middle" while beaming that shit-eating grin we know all too well. In seconds, Slick had donned Earl’s zebra stripes and was signalling for the bell to ring!

From the get-go, Slick’s promises of neutrality dissolved into complete bunk, and he threw in every cheap trick he could to give Lacey the unfair advantage, at one point even holding Durango Kid in a full nelson to give Lacey an unobstructed shot. Frustrated with the unfair treatment, Durango Kid eventually snapped and dropkicked Slick in the face. Unfortunately, strength in numbers won out, putting the strap on Lacey as a worn down Durango Kid fell quick prey to a snappy DDT and eventually a pin.

When Lacey was awarded the belt, she threw Durango Kid over the ropes as if discarding a napkin. Lacey, what’s gotten into you? I sure hope now that she’s "earned" back her Ultra-X belt, her mean streak will subside. I’d hate to see her going down a road she can’t come back from. (If it’s any consolation to John Chase Earl, the crowd was chanting "we want a new ref!" pretty regularly throughout.)

Rocky Ocean v. Dante Acosta
With another set of wonderfully done vignettes, we had Puerto-Rican born Rocky Ocean cutting a promo entirely en Español, and the ever-rotten Dante Acosta angrily deriding the crowd for misrepresenting him as a Mexican, when he’s actually Filipino.

I was hooked going into this heel/heel bout, as (in this writer’s opinion) Rocky Ocean is the best "bully" heel the promotion has, while Acosta makes for a good double-crosser and wondered how the psychology would play out, but felt satisfied with the ending. It began in Rocky’s favor, him beating the pulp out of Acosta and manuevering a powerful suplex…but Acosta played dirty. Eye raking, ballshots, choking in the ropes and finally a big knee (with his bare knee exposed) to the side of Ocean’s noggin wore him down, and those brass knuckles that Acosta had smuggled in his trunks and a series of punches (which the ref somehow missed) finished him off.

After a quick cover and pinfall, Acosta quickly stashed his brass knuckles into the barely-conscious Ocean’s singlet. When Ocean finally came to, and Acosta had left the ring, the ref assumed they were Ocean’s all along. With a face of disbelief, Ocean slunk back to the dressing room.

The crowd, who’d normally boo Rocky Ocean, had to make a value judgment and decide which wrestler they disliked more, and it made for an interesting match. I think we’re all excited to see Rocky enact his revenge on an upcoming program.

801 District (Junior X + Los Mochi Paco) v. Jason Jaxon + Manny Fresh
801 District’s entrances haven’t become any tamer. Junior X carried a small whiteboard with him, upon which he wrote funny messages to the crowd and opponents. Jason Jaxon was doing a few quasi-comedy spots with ring announcer Josh Whitaker, while Manny Fresh seemed jocular, happy to be in the ring again. Yeah, it was surreal, but definitely fun.

I got a kick out of Fresh incredulously asking the crowd why they didn’t "cheer [his] beautiful suplex!" early on, but X kept him in check with a backbreaker and a body slam immediately following. Throughout, Jaxon kept alternating between griping at the crowd and interfering in the match. Initially it didn’t matter because, even outmatched with 2 against 1, Paco still held his own and Junior X’s crossbody on both Fresh and Jaxon was awesome. Eventually the inequality caught up to Junior X, and just when it seemed that Jaxon could’ve snuck ahead for the win, the Reign of Insane interfered. Rambling incoherently about "heroes dying" and how bad it sucked being picked on in high school, Bronson and Kade managed to escalate everything into a kerfuffle. Just as the ring dust had settled and Jaxon had begun to utter the words "The 801 District it OVER!", Paco rolled him up for a quick 1-2-3 and the retention of the Tag Team belts for the District.

Jaxon’s face was one of unadulterated rage at the interference, quickly cementing the Reign of Insane’s status as most hated tag team in the promotion while stoking the fires of a new feud brewing within the 801 District. Now they’ve got definite bullseyes on their backs for those tag straps!

Jayson Bravo v. Dark Angel
After the intermission, Commissioner M.K., as "M.K. Bandit," did the ring announcing duties. Since he’ll be announcing at an upcoming NWA event he wanted to make ensure he was in top-top shape for it…and judging by his voice inflection when announcing the next match, he certainly was!

The match began with a taped vignette of an embittered Jayson Bravo taking potshots at UCW-Zero’s only deaf wrestler, Dark Angel. Bravo called him "The Pillsbury Deaf Boy" and threatened to "make an example of him," to "remind him" of Bravo’s "Three-time heavyweight champ status." Of course, none of Bravo’s tough talking amounted to anything as Dark Angel couldn’t even hear the insults. He countered by walking into an arena full of fans cheering wildly with jazz hands.

Angel was marked from the beginning, the target of Bravo’s bullying and a series of legdrops. Angel’s suplex and submission holds early on won’t go unmentioned, but neither will Sierra Rose’s illegal involvement in the match, rummaging around beneath the ring to produce a crowbar which she used to unfair advantage. No one wanted her there but Bravo (of course), though the crowbar wasn’t really Angel’s downfall. It was the painful submission holds that Bravo kept wrangling him into. After an arduous minute or so in Bravo’s modified camel clutch, Angel tapped, out giving Bravo the win by submission.

Angel was helped back to the locker room by a few refs, while Bravo remained in the ring with Sierra to gloat about his cheap win. Despite what your D.A.R.E. officer told you, sometimes the bullies really do win.

Dallas Murdock + Brandon Austin v. Reign of Insane (Bronson + Kade)
Bronson entered the ring being cradled by Kade, spazzing out every few seconds. It didn’t seem all that weird when compared to the taped promo that’d just played in which he cackled like the joker, gleefully reminding Dallas Murdock of their long history together and what he had planned for the night.

Murdock and Brandon Austin may not have been the best matchup, made evident by Austin’s cocky showboating and eagerness to outshine his partner and Murdock’s exasperated expression. The veteran Murdock started strong, the highlight being a stiff boot right to Kade’s chin which took the wind right out of his sails. All the while, Austin kept trying to jump in. Things turned quickly for Murdock though, and the Reign of Insane proved (for the second time of the night) that they’re not above double teaming. Kade’s dropkick, work in the corner and DDT (a popular move tonight) had Murdock weakened to desperation, searching for the hot tag he needed to save the match.

Once Murdock tagged him in, Austin showed his true colors, quickly turning on his partner with a shocking slam to the mat and a series of slams. What? Then he turned his focus onto the equally stunned Reign of Insane who quickly abandoned the ring. The match ultimately ended with Murdock and Austin winning by disqualification—unsatisfying for all involved. Austin’s newfound role as an arrogant, backstabbing heel, turning on his partner and seeking the spotlight, seems less compelling than the "silent-yet-dangerous" persona he’d been cultivating up to that point, and I’m not sure it makes the most sense. Here’s hoping that the rookie changes his attitude soon, because he’s got a great moveset, a formidable reputation and an awesome look.

Martin Casaus v. Zack James
The main event we’d all been waiting for began with a Boxing style "weigh in" segment. Visibly happy to be divorced from a partnership with Stevie Slick, Martin Casaus seems notably relaxed in poise for the title. Knowing this very title is coveted by many other wrestlers in the promotion, Zack James seems all the more driven to hold onto it.

Though playing into James’ strength’s of high flying, aerial moves, Casaus kept it mostly relegated to the ground, turning the match into a mix of a brawl and old-school submission wrestling. Sensing the high level competition, and the prospect of attention, a literal demon from James’ past emerged from the dressing room and … wait. No, I’ve fed your intrigue this far. You’ve got to watch the show to see what happened (check the pics too) cuz I ain’t blabbin’ the main event. Just know it was a banger!

All this and much much more as part of Utah’s premiere wrestling promotion! Don’t miss it! An Undertaker-debut-at-Surivivor-Series-1990 entrance to the fans who came out and a Shockmaster-debut-at-Clash-of-the-Champions-XXIV to those who didn’t. Come out for the next taping on May 31 at the UCW Arena (47 S. Orange St). Follow UCW-Zero on Facebook and Twitter, and subscribe to their YouTube channel. Finally (and then you can go home), remember that nothing really happens until the bad guy shows up. Stay heel.