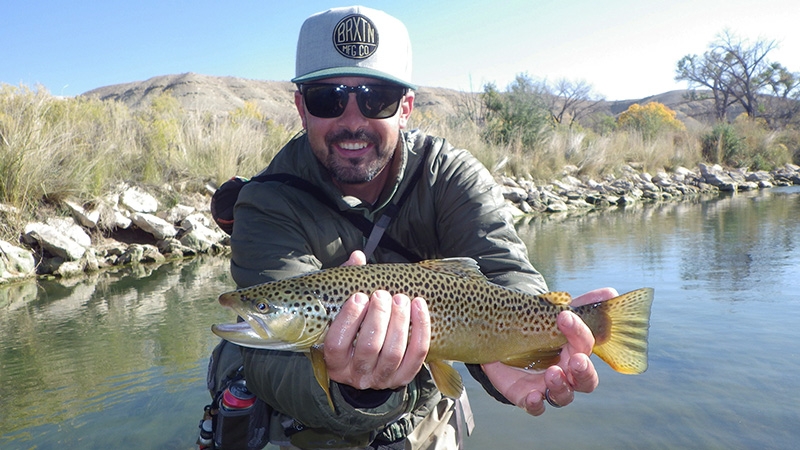 Brighton Anglers co-founder Mouse can't hold back a smile to show off his fish!

Rippin’ Lips: the Story of the Brighton Anglers

Over the last couple years, while snowboarding at Brighton, I have been hearing more and more about fly fishing. Originally, I wasn’t that intrigued. I don’t enjoy traditional bait fishing, I’m not a seafood eater, and just the thought of trying to fit my large hand into a fish’s small throat to get my power bait–covered treble hook out of there was enough to make me sick. But the more fish stories I heard—and the bigger those trout got—the more I wanted to experience angling on the fly.

So, with some hesitation, some dedication and a little bit of money, I discovered what the magic behind fly-fishing was. Fly-fishing, for those unfamiliar, is the art of casting a weightless lure or fly, and presenting the bug to the fish with a natural drift, to outsmart the fish into thinking your lure is an actual bug, instead of letting the smell of the bait do all of the work for you. I have been fly-fishing for about four months and am fully addicted. I somewhat grasp the basics, but am still far from what you would consider an expert angler. I figured the best resource to get insight was from the people who inspired me to get hooked in the first place: the Brighton Anglers.
Everyone knows that the best way to do anything is with a solid crew of homies. Fly fishing is no different. “The Brighton Anglers started as a bunch of Brighton employees and locals telling fish stories and going fishing together. At first, it was just a fun sticker to run on your snowboard,” says Jared Winkler, Marketing at Brighton, who works with his boy Mouse, Terrain Park Manager,  as leaders of Brighton’s park crew. As the fish stories got bigger and people wanted photos as proof, Winkler, Mouse and Parker Worthen started expanding media outreach through Facebook, Instagram and a blog to share pictures. Also, it just so happens that Utah has some of the best rivers in the country to fly fish for trout.
A couple weeks ago, Mouse, Worthen, Jeremy Seegmiller and I took a trip to the lower Provo River. We had originally intended to hit the Weber River, but the weather didn’t permit, so we hit up a night session just below the dam in Provo Canyon. As a newb to the fish game, I got a chance to ask these guys some questions and learn some of the etiquette that goes hand in hand with fly fishing. I asked about their catch-and-release policy, which I guess isn’t written in stone. “I would definitely eat a fish if I ever got stranded,” says Worthen, “but fly fishing is for sport and art. You put the fish back so they have a chance to mature and grow and give others the joy of catching them later.” This was good news to me, because nothing turns my stomach more than the smell of fish carcass in the back seat.
These pictures of ginormous trout in amazing locations made me nervous, though. The fish on their blog appear to be 20-plus inches, and after my four months of avid fishing, I still haven’t caught a single monster like that. When I was finally able to fish with their crew, I confronted them with my fear of inferior angling skills due to the photos of their oversized hogs of fish, and they chuckled. “I wish that was the case. We spend plenty of time chasing after big fish. Though, a lot of the time, we end up with only a fish or two a day, or even skunked. The trick is to take trick photos of little fish to make them look bigger!” says Jared.
I personally don’t have much experience with much more than dry flies or nymphs, but Mouse and Worthen fished with beautiful tan, white, yellow and glitter streamer fish patterns. At first glance, you would think they’re over-the-top hipster earrings on land, but they transform into small swimming fish when wet and in the water. As soon as Mouse dropped his streamer in the water, a fish jumped for it. He didn’t land this fish, but that didn’t stop him from catching another up river, and letting out the loudest Mouse howl I have ever had the pleasure of hearing!
If you want to know more about local fly-fishing, check out local fly shops. Just as with any other underground hobby, it is super important to support your local scene. Fly shops like Fish Tech Outfitters and Western Rivers Flyfisher have some of the most knowledgeable employees on angling, who are more than willing to share their trade secrets to help you make the most of your fishing adventure. Check out the Brighton Anglers’ blog to read some awesome stories and about re-catching fish at brightonanglers.com or hit them up on the ‘gram
@brightonanglers.
If you want to be a Brighton Angler, the best way to do it is just to ask these guys to go fish. If you’re a good fit with the crew, and fun to fish with, Winkler says you can be invited on future trips. There is really no better feeling than “fish on.”
Photos: