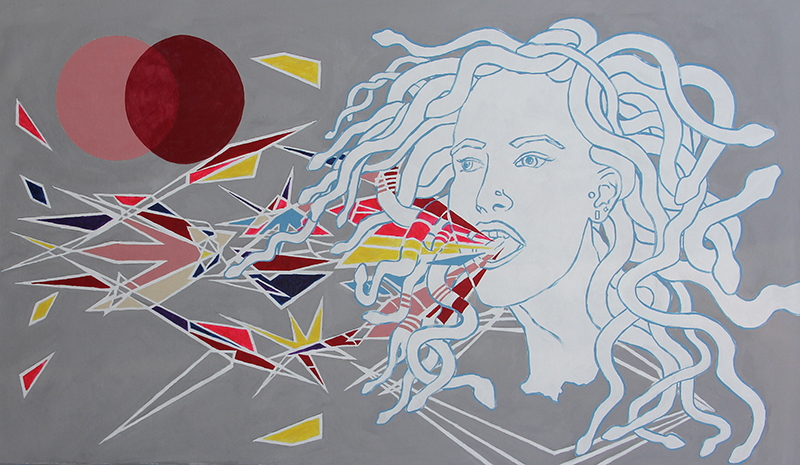 WALT has been inspired by feminism, but this Utah chapter is also a huge homage to Utah women. “I think Utah women are absolutely fascinating,” she says. Redstone is an ex-Mormon who experienced everything from Temple marriage to Relief Society meetings before leaving the church. “It was so interesting,” she says, “to be invited into these women’s circles and realize the pain that was really happening behind closed doors.” Redstone has also been inspired by Ordain Women, fronted by Kate Kelly. “I attended the first meeting of Ordain Women,” says Redstone. “It’s been beautiful to watch a women’s movement kind of come to fruition in Utah [with] women who were willing to be in the Mormon church and try to change it from within.” Using Greek history as a vehicle for artistic expression, her WALT pieces will incorporate religious life, relics and representation. One such piece in her WALT gallery depicts the Medusa—a figure from Greek mythology who has snakes for hair and can turn men to stone with one look into her eyes. Redstone’s painting is of a modern, pierced Medusa with colors and glass-like, geometrical shapes spewing from her open mouth, hair still made of up hundreds of twisting snakes. Although the theory in her pieces is vast and complex, Redstone made her WALT pieces more accessible. “We don’t have a large exposure to contemporary art in Utah,” she says, “although we do have places like UMOCA, which are showing beautiful pieces, and a number of small galleries. But there’s really a lack of it in Utah.”

When she isn’t painting and presenting her artwork, Redstone is an avid activist. With over 10 years of experience as a fine artist, arts educator, human rights organizer and designer, Redstone is determined to create change within our society—whether by protest or project. “I’ve been really involved with the International Environmental Movement, the Human Rights Movement, immigrant rights, LGBTQ rights,” she says. Her work has been exhibited across the U.S. in places like the Utah Museum of Contemporary Art and Aspen Arts Museum. Redstone began protesting as a kid in high school, when she handed out newsletters at an assembly regarding a teacher whose inappropriate actions toward young girls saw no punishment. Since then, Redstone has made protesting a part of her life. “I get myself arrested for civil disobedience, and I’ve organized other people getting arrested,” she says. A major concern of Redstone’s is the growing animosity toward women and LGBTQ individuals. Instances such as rape and murder are increasing at terrifying rates, yet nothing has been done to prevent and eliminate these issues. “I think there’s a real fear—on the part of white men especially—of losing power,” she says. “I live my life without apologies and live my life the same way any man would do.”

Along with her beautiful art pieces, Cori Redstone will be selling WALT membership cards at the gallery. “I made a series of 500 [cards],” she says. The membership card is a small, numbered, unique piece of art for only $10. All the proceedings from these cards will go to the Planned Parenthood Association of Utah. “Planned Parenthood absolutely saved me. I love them and support them 100 percent,” says Redstone. “I’m very happy to give the proceeds of the cards to them.” Redstone hopes that her pieces will ignite conversations concerning women, trans-individuals, female identity within the state, access to healthcare and domestic violence prevention. “I [have] learned that it didn’t matter what the artist put into it; it mattered that it instituted a conversation,” she says. As for future artists, especially artists in Utah, Redstone says, “Making a living as an artist is nearly impossible—so have several backup plans. BUT: Be weird. Don’t be ashamed. And the purpose of the contemporary artist is to subvert dominant cultures. Subvert the hell out of everything.”

Check out more of Cori Redstone’s work at coriredstone.com/index.html and see her gallery opening reception on July 15 from 6 p.m. to 9 p.m. at the Charley Hafen Jewelers Gallery.

Radical Feminism in Contemporary Art: An Interview with Artist Cori Redstone
<<< Page One