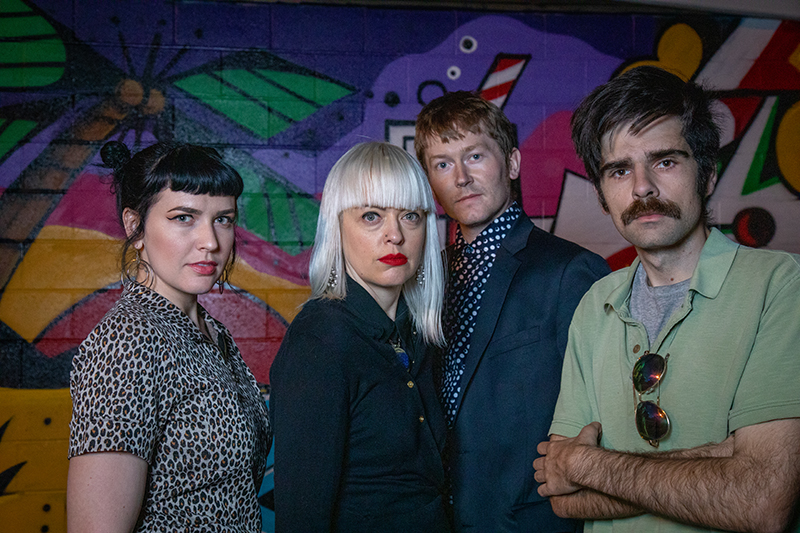 Art Against Doom: Using a Visual Medium to Inform us of Climate Change

Some of you may have noticed, but we’ve been living with an anvil-like chandelier looming over us by a thread that we either refer to as “climate change,” “global warming” or “the impending doom of life on earth as we know it!” Whether you choose to ignore it or not, it is there, and people like Nicholas Kuzmack and Kady Newland are attempting to inform everybody of the current and future effects of climate change through the first in what will be a series of art events under the moniker Art Against Doom.

“We’re an organization that seeks to use various art mediums to raise awareness about certain crises that are happening in our time,” says Kuzmack. Running the show with Adam Guymon, Psarah Johnson, Madelyne Boyer and Stephen Michael Christian, a local organizer in various political groups in SLC, they talked about trying to bridge the gap between art and politics by asking multiple artists to create something tangible from an otherwise abstract concept.

For some, the concept of climate change is so abstract and unsettling that it’s easier for them to either deny it all together or take the defeatist approach. “There’s a lot of nihilism in government,” says Newland, “we have climate deniers, but on the other side we have left-wing folks who are scared to death and just checked out.”

“Climate crisis is a very overwhelming crisis, and it’s very easy to get a bit daunted by how vast the consequences are.”

The main goal in creating this event is to bring people out, open up a dialogue, emotionally process our situation, use it as a means of conquering those fears and possibly ignite the fire to do something about it. The event itself is a retaliation to the overwhelming anxiety that Kuzmack deals with when facing the fact that humans may have 5–50 years left on this planet. “Climate crisis is a very overwhelming crisis, and it’s very easy to get a bit daunted by how vast the consequences are,” says Kuzmack. “There are people who are apathetic or nihilistic about it and we’re anti-nihilist, I think.” As history has shown, art that stands the test of time has come out in the face of adversity. Kuzmack points out that AAD is not dissimilar to the Rock Against Racism concerts of the late ’70s and early ’80s, which also were a rendition of using art as a form of radical protest. “While there are a lot of things that are going on that are scary and overwhelming it’s hard not to feel a bit daunted,” says Kuzmack, “This is something you can do—using art as a way to channel resources and awareness.”

While AAD aims to raise awareness and support for multiple causes, Newland expresses that climate change is the most pressing matter and most neglected in terms of federal support. “The leader of the EPA is [stripping] down the laws that protect public health like air quality and water quality,” says Newland. “So, now more than ever, we need people to be heard. Other countries are invested in climate and are fighting the impact. Sadly, we’re climbing an uphill battle.” While the constant struggle for radical change drudges on, our generation and the generation following us generally want change in a world that reflects the values of environmental preservation (along with anti-racism, anti-sexism and anti-capitalism) as opposed to the dinosaurs in charge who won’t live long enough to reap what they’ve sewn. “That was part of our decision to find a venue that was all ages and accept art from all age groups,” says Newland. “We want kids to participate because they’re inheriting this problem.”

“Now more than ever, we need people to be heard. Other countries are invested in climate and are fighting the impact. Sadly, we’re climbing an uphill battle.”

The art featured at the event will include photography, painting, sculpting and different types of performance art, spoken word, poetry and music. Among those featured are mixed media artist/photographer Cat Palmer, photographers Sergio Gomes, Janna Jensen and Peter Wiarda, embroidery artist Brinley Froelich and many more to be announced. “Pretty much the only art we aren’t allowing is anything that has a hateful theme or is ‘tone-deaf’,” says Newland. Included will be a raffle in which the money won will go to SLC Air Protectors and Utah Permaculture Collective, both of whom will also be tabling the event. “SLC Air Protectors are an organization that does a lot of work regarding environmental sovereignty and the air quality issues that we have here,” says Kuzmack, “Utah Permaculture Collective is seeking to establish permaculture gardens throughout the valley to allow for food sovereignty to take place so people can grow their own food and not rely on big stores for resources.”

AAD is projected to be a series of art shows that all deal with themes of injustice and other crisis situations in the world at large. The next event is slated to deal with the problems dealing with immigration in the United States. “All of us have a caring concern about what’s happening in the country right now about I.C.E detaining people and doing raids around the country, holding people in concentration camps at our border,” says Newland, “If we can raise relief funding for immigrant parents and asylum seekers to get legal help… so they can [potentially] get their children out of camps.”

“We’re hoping that as artists we can not only bring discussion, but channel resources into meaningful action to address these issues and maybe un-fuck the world a little bit.”

The interconnection of all these separate events will depict the causal link between the crises—how the United States’ pension for economic growth and thirst for resources causes them to move in on other countries, and by depleting their resources and causing environmental degradation in its wake will force people to seek refuge in a more fertile land. “We’re hoping that as artists we can not only bring discussion, but channel resources into meaningful action to address these issues and maybe un-fuck the world a little bit,” says Kuzmack.

The Art Against Doom event will take place at Copper Palate Press on Sept. 20. If you feel like you want to be a part of a worthy cause that affects all of us feel free to submit any piece of art that will add to the theme or simply attend the event and submit donations. More information on the event can be found at their website.