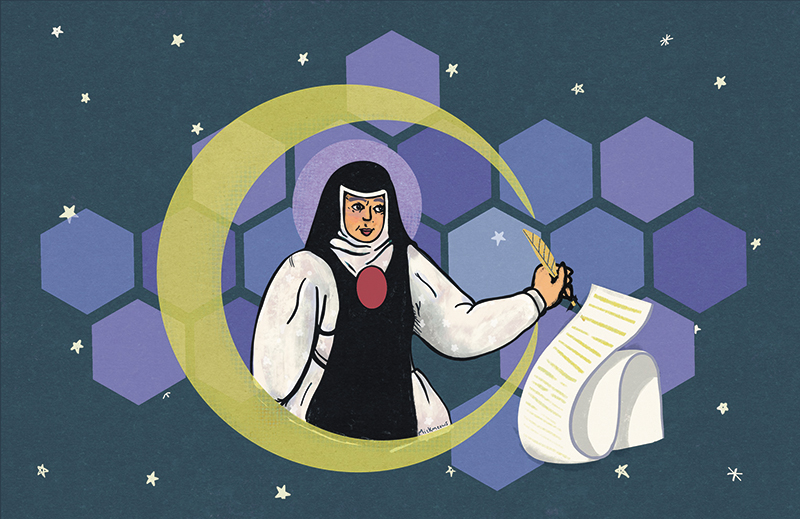 Artes en Español: the Sor Juana Contest for Poetry and Prose in Spanish

Artes de México en Utah’s Sor Juana Contest for Poetry and Prose in Spanish is Utah’s statewide contest for literary writing in the language. The contest is named after Sor Juana Inés de la Cruz, a 17th-century Mexican nun, poet, playwright and intellectual. “She was also known for defending the rights of women and minorities, for whom she continues to be a role model today,” says Artes Board Chair Fanny Guadalupe Blauer. Just having celebrated its seventh consecutive year, the Sor Juana Contest has increasingly been a local soundboard for Spanish-language literary voices and has galvanized writers in our community on a grassroots level.

Susan Vogel co-founded Artes de México en Utah, a 501(c)(3) nonprofit, in 2010 and began the Sor Juana Contest for Poetry and Prose in Spanish in 2013. Blauer became aware of the organization in 2014 and became a board member soon thereafter. “This idea was then presented to Utah Humanities, and they immediately supported our initiative to create something formal to all,” Blauer says of the contest’s sponsor. “In the last five years, I have seen this contest grow tremendously.”

This growth is undoubtedly tied to shifts in Utah’s language demographics. “Spanish has become the second-most spoken language in Utah,” Blauer says. “More and more people feel the need to connect their feelings through language … For our native Spanish speakers that participate, this is a way to express their feelings in their language. For those for whom Spanish is a second language, it’s a way to connect culturally.”

The Sor Juana Contest has increasingly been a local soundboard for Spanish-language literary voices.

The call for entries starts in March and the deadline falls in May. Judges with acumen in poetry meet multiple times over the summer to consider anonymized submissions. Starting in 2018, the contest began to include visual art. All of the winning work is printed as a collection in the contest’s program that Artes releases at the awards ceremony in the fall as a part of Utah Humanities’ Book Festival. The Main Salt Lake City Public Library has hosted it all seven years.

Perhaps most remarkable about the Sor Juana Contest for Poetry and Prose in Spanish are the participants. The contest has Categories I and II for poetry, which are for native and second-language Spanish speakers, respectively. This year, the First Place winners in Category I were Jorge Pérez in Adult Poetry and Ezequiel, 14, in Youth Poetry.

Pérez was born in Uruguay, and “due to coming from a very humble family, I only finished six years of school,” he says. “Reason being, I started working at the age of 11 to support my own life. At age 14, I moved to Argentina, searching for new opportunities. Being there, I began writing songs or poems that I would only share with family and friends … They would always tell me that I had such a gift as a writer, and to continue forward, which I did, but never with the intent of it being published. It was a way of expressing thoughts and feelings I had.”

Perhaps most remarkable about the Sor Juana Contest for Poetry and Prose in Spanish are the participants.

Pérez says he was surprised but delighted to win First Place. “I felt happy, blessed, thankful and shared the news with my family,” he says, “very grateful for this opportunity, since it was my first time participating in something like this.” Besides a brief stint on Hispanic radio station AM 1550 on which he’d read his poems, Pérez has no formal training and has worked construction since he came to the U.S. Living under a dictatorship in Uruguay at a young age, however, was the groundwork for his winning Sor Juana Contest poem, “Desaparecidos” (“The Disappeared”). In the poem, the speaker relates the visceral anxiety with which he copes with people going missing in his community amid state violence.

Ezequiel’s winning poem, “La luz crea sombras” (“The Light Creates Shadows”), deals with the speaker fleeing a similar sense of impending violence—“all the problems appearing in South America,” Ezequiel says. In addition to intentional and emotionally resonant language, the contest’s judges also gauge how submitted poems may be “pertinent, timely, or culturally relevant subject matter (relevant to our Hispanic/Latinx communities as well as the other communities we make up in our daily lives),” Blauer says.

Ezequiel—whose teacher gave him and all students a chance to enter the Sor Juana Contest for Poetry and Prose—was also surprised to learn he won First Place. So too was Category II Youth Poetry winner Hannah, 17. She’s a Layton High senior who’s been in the Spanish-immersion program for 12 years. Her winning  poem, “La noche sin amor” (“The Night without Love”), employs simple language that nevertheless harnesses the heavens: The moon suffers from loneliness and isolation in the face of unrequited love from the sun and stars.

“In the last five years, I have seen this contest grow tremendously.”

“Initially, I intended to write a poem in English but couldn’t find the words,” Hannah says. “When we were presented with the Sor Juana opportunity, I was terrified. I had never written creatively in Spanish, though it seemed that as I tried, it all came easier. The idea was made simpler. I am now a believer that second language poetry is some of the best.”

For more information about the Sor Juana Contest for Poetry and Prose in Spanish, visit artesmexut.org/sor-juana-poetry-contest. There you can find upcoming dates for submission to the contest and the awards ceremonies. You can also find posts of the winning poems and artwork on Artes’ Facebook and Instagram @ArtesdeMexicoenUtah, and the entire program featuring winning work on here.

Editor’s note: References to Fanny Guadalupe Blauer within this article, after the first mention of her full name, were originally published as “Guadalupe Blauer.” Guadalupe is her second name, not a part of her last name. Mentions of her have been changed to “Blauer” after the first mention. We originally listed the Sor Juana Contest’s website as a “.com.” We have corrected it to its proper domain, “.org.”