O, Utah! Should I stay or should I go? That’s the question at the heart of Feast, last weekend’s evening-length performance from choreographer Charlotte Boye-Christensen’s NOW-ID. 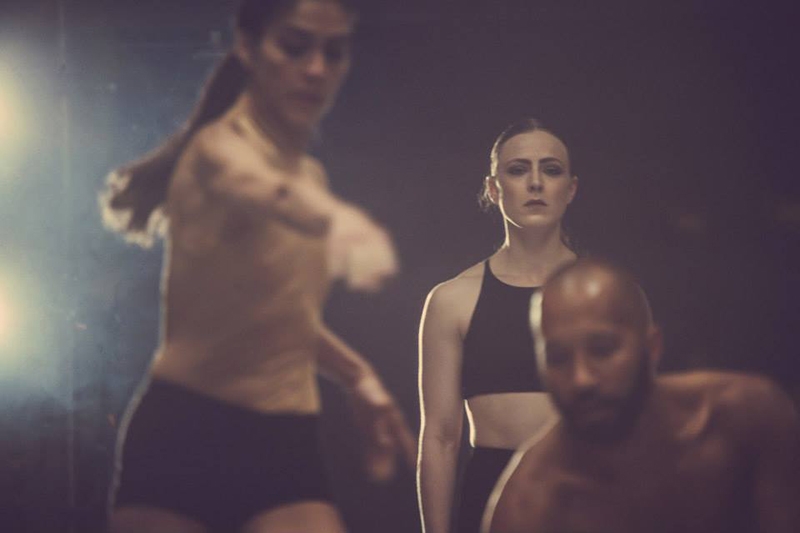 O, Utah! Should I stay or should I go? That’s the question at the heart of Feast, last weekend’s evening-length performance from choreographer Charlotte Boye-Christensen’s NOW-ID. Feast, isn’t really the hipster-multimedia-dance-theater circus it markets itself as. The meat of the work is an intimate duet for actors Robert Scott Smith and Andra Harbold, whose collaborations at The Leonardo I’ve enjoyed immensely before. (In fact, the writing is not credited to these two, but to Troy Deutsch, though I sense that the actors may have had collaborative input). Their little drama is pestered, haunted and interrupted by Boye-Christensen’s cast—Jo Blake, Yumelia Garcia and Jennifer Freeman. Prissily formal, their inscrutable pure-dance ablutions never quite come into focus, and fade quickly from memory.

Near the beginning of Feast, Robert Scott Smith paces the length of the great table that serves as a stage. “This is the place,” he begins and then trails off, King Lear style. Smith is very talented, and relishes these first lines, the strongest in the work, which contemplate his character’s powerlessness over the “kingdom” as well as his impending mortality. The language, as it will be throughout, is poetic and often intentionally ambiguous. He does reveal that he’s waiting for someone who’s been sent away for answers—his salty domain is falling apart as fast as he is. He worries that she won’t be back in time.

The lonely monarch isn’t left alone to die. Soon enough, Andra Harbold falls from the sky (the bar area above the main floor). The prodigal daughter returns with much gusto—and shock at the diminished state of her foil. Sadly for Smith, she has little to offer in the way of wisdom, culture or “help” from “the outside.” She gifts Smith a fork—to him, an exotic trinket. He stabs his own hand, and contemplates suicide. She says she’ll help him if he first sits down, and tries the souvenir out at a proper sit-down meal. Instead, a barber (whose trendy logo is featured auspiciously in the program notes) hops up and removes Smith’s beard. Smith gets melancholy, and tells Harbold he feels like he’s holding her back. Dreaming aloud, he muses that she’s the bird “and I am the cage … or I clean the cage … or I pay someone to clean the cage.” Florid digressions peter out, and he refuses her entreaties to leave with her. Who would stay to clean the cage? Fin.

It’s obvious that the dying kingdom is a hyperbolic metaphor for Utah. The dying patriarch is everyone in the audience. (It’s an open secret that many of us here, especially those with the means to leave, beat ourselves up for not getting the hell outta Dodge. We just can’t do it, or worse, we won’t, and we despise ourselves to varying degrees.) Feast’s poetry successfully distills this unique local brand of self-hate to a few of its most potent symbols. The salty, dry landscape is at turns a consolation, and a specter that reports how far we are from “civilization.” Patriarchy, in grotesque caricature, reveals itself to be impotent and regressive, faltering in the face of modernity like the Mormon Church. It’s too perfect that actor Robert Scott Smith’s name ends in Smith.

It’s a clever place to start. The problem with Feast is that it’s all so serious and self-indulgent. Like its target audience, it fails to go anywhere. Neither are we ever encouraged to actually laugh at ourselves for our endemic neurosis, nor is a solution to the predicament proposed. The king and the return missionary (as we might call Harbold) wallow in their mental illness. We are invited, vicariously, to wallow in ours.

The pitfall this script falls prey to is that in depicting a very universal experience—that of self-pity—the author loses track of the very specific situation for which the action is serving as a metaphor. At one point, Harbold’s character—who, I think, is meant to be a sort of feminist hero—taunts the xenophobic Smith by comparing herself to a litany of famous, “empowered” women. “I am Sacajawea,” she boasts, in a list that also winkingly contains contemporary figures like Beyoncé, Jodie Foster and Sandra Bullock. The sad irony is in how palpably clear it is from context that there’s really no room in this magic-realist remixing of time and space for a Native American—except insofar as she exists in a canon of pop cultural babes that are too cool, stop off between the coasts. This is one of many missed opportunities in Feast. The work fails to contemplate the relationship between the (largely upper-middle class, white) angst of the king and the audience, and any other real people or real events in history. In my book, it’s not such a crime to never leave home, or to come back here to make a life. The crime is to fail to look around and realize that even “home” is bigger and more complex than your personal story.

All we can really glean from the text is that this desert, oppressive to at least one of its inhabitants, is getting worse. (Perhaps this is the point where we’re supposed to congratulate ourselves for making the real Utah “better” by participating in cultural events such as Feast). Yet, to what vision of another, better place are we aspiring? New York? San Francisco? Portland? Berlin? Copenhagen? Little is clear in Feast about “the outside.” In a long aside, Harbold’s character remembers the great world in terms of the feasts she’s consumed on her travels. She’s munched in “slums,” in “living rooms,” in “palaces”—but we don’t get to know even what it is that she’s eaten. She has seen people much poorer—but also much richer than herself—so what? In the end, even travel, the radical act of self-displacement, becomes another opportunity for navel-gazing.

Amid these failures in the text, the dancers might have filled in the blanks—alternately for the exotic, or for the local menaces of distance and conservative culture. To me, Charlotte Boye-Christensen’s voiceless performers just look very earnest—like lost deer—as they traipse in and out of Smith and Harbold’s domestic melodrama. Right down to the costuming, it’s as if Blake (still shirtless), Garcia and Freeman wandered right out of Christensen’s last befuddling dance, The Wedding (of which all but Freeman were a part). And now they have found themselves at a very uncomfortable dinner party.