Founded on the idea of celebrating art regardless of meaning, The Museum of Nobody openly invites and encourages the exploration of creativity.

The Creativity Crusades: The Museum of Nobody 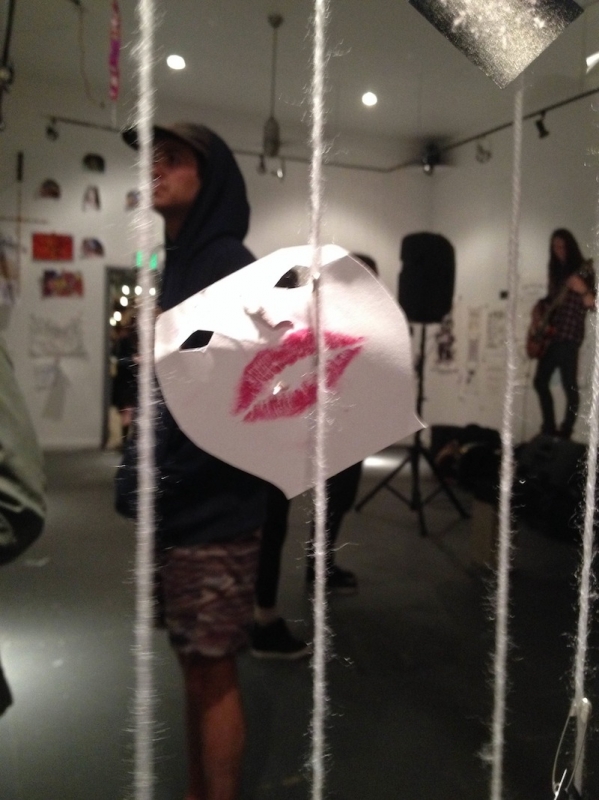 The Museum of Nobody at the SLC Photo Collective. Photo: Elizabeth Espinoza

Founded on the idea of celebrating art regardless of meaning, The Museum of Nobody openly invites and encourages the exploration of creativity. Nine students from the University of Utah curated the show. Thirty or so contributors, discovered from a variety of avenues that lacked any system or regulation, were provided an opportunity to showcase their talents under a veil of namelessness.

In the center of the gallery a small stage was assembled for performance art pieces, the floor surrounding the stage was ideal for joining in a movement of movement when the urge for dancing stuck. The music performed gave off a foggy sensation downstairs, light psychedelic melancholy seemed to dominate the night. Meanwhile, upstairs heavy trance and pop music played courtesy of a variety performance based DJs. The atmospheric differences between the two levels required a passage through a hallway that featured a shower curtain with a music video being projected onto it—not an inch of space was wasted in the collaboration. The stage provided not only a visual piece, but also helped carry me from one installment to the next.

The overall set up of The Museum of Nobody had a certain intimacy—I didn’t feel as though I was at an art showing, so much as I had stumbled into somebody’s living space, and was methodically making my way throughout their home, carefully examining the components of their life’s journey, strewn about the house.

One of my personal favorites was a series of selfies pulled from Instagram’s user imseriousitsme. When I first spotted the obvious Instagram branding I assumed there would be a satirical mocking of social media, but instead was simply the pictures of a woman living. Found poetry hung from the ceilings, a kindergarten craft projects were boasted by a teacher, gold leafing adorned bamboo bowls and eucalyptus were scattered, the whole affair seemed right out of a dream.

The community’s turnout to The Museum of Nobody, was as much expected, as it was unexpected of the event. Each individual added the to the eccentric nature of anonymous art displayed throughout the Salt Lake City Photo Collective’s walls. Pantsuits and velvet ran rampant among the crowd, creating a moving installation of artistic vision. Older men with glasses, that smelt like leather and ivory, interwoven with women wearing oversized hats, cast shadows over patterns of paisley and stripes. Among all this there was not an ounce of pretentious bullshit lingering over the crowd. The lack of identity tied to each artists work, allowed viewers to observe without comparison. There was a certain security that presented itself, when the ability to name drop and judge was taken away.

As the night grew on, everyone who had gathered for the evening became familiar, sharing drinks and stories. Never once did I consider myself at a gallery, or museum. The Museum of Nobody recreated how art is experienced, and expanded the definition of art. The Bureau of Nobody should be carefully watched for future events to come.