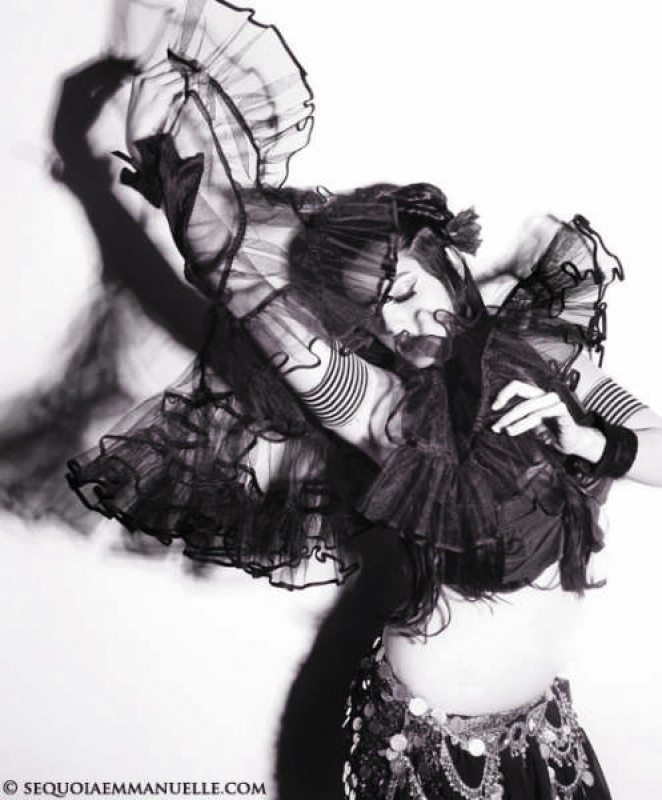 LaRa and Barefoot Bellydance have arrived on the Utah belly dance scene in ruffles and sequins, while spinning fire.  Urban Tribal Belly Dance, usually more dark, mysterious and industrial, has a fresh and exciting look formed from the creative imagination of their director, LaRa.  It is fun, light, feminine, and exciting, because they really do dance with fire!

LaRa was raised in Southern California.  She became enamored with Middle Eastern dance when she was 12 years old, and had watched members of the Urban Tribal Dance Company at a Renaissance Faire.“They mesmerized me,” LaRa said.  “From that moment, I wanted to learn how to belly dance.”

LaRa studied Egyptian cabaret for almost three years, and then she found a tribal instructor, which was her real desire.  This eventually led her to Rachel Lazarus Soto, wife of Jeremiah Soto of Solace.  It wasn’t very long before she was asked to join Soto’s Devadasi World Fusion Dance Company.  One of LaRa’s final performances, “Asian Magic,” is recorded on the first ever tribal fusion performance DVD, Evolution.  LaRa then became a member of Atash Maya, directed by Sabrina Fox, a tribal fusion and fire performance dance troupe out of San Diego, California. After moving to Utah two years ago, LaRa wanted to start her own dance troupe.  She said, “I started conceptualizing ideas about the kind of troupe I wanted to create.  After having my son, I put my vision together and created Barefoot Bellydance.  The core of our dancing is a strong American Tribal Style, which I believe is the basis for all tribal belly dancing.  I then incorporated the style of Steampunk, which refers Victorian England.  Our look is ruffles, sequins and glitter, but we are dancing tribal fusion.”

There are three dancers in Barefoot Bellydance: LaRa, Amina, and Jen. They are all ATS certified with Carolena Nericcio.

LaRa teaches ATS and Tribal Fusion dance at the Northwest Recreation Center in Salt Lake City on Tuesdays and Thursdays.  She has also been invited to teach workshops nationally over the past five years.

At the present time, LaRa and many members of Utah’s belly dance community are involved in a benefit performance on July 25, to raise money for Viktoriya, a Utah dancer who was in a head-on automobile crash several months ago.  The performance will be held at The Academy of Performing Arts, 2207 South Main Street, Salt Lake City; doors open at 5 p.m., performance at 6 p.m.  Tickets are $15 in advance through Paypal, and $20 at the door.  All proceeds go to assist Viktoriya and her family.

LaRa and Barefoot Bellydance will also be performing at the Fusion Fest, July 10-11, in Idaho, and LaRa is teaching a workshop at the Bellydance Intensive in Las Vegas this September.

“What is most important to me,” said LaRa, “is that tribal fusion is not what you do starting out.  The core of it is ATS.  Everyone gets so excited about Rachel Brice and Zoe Jakes, but they all started with ATS first.”