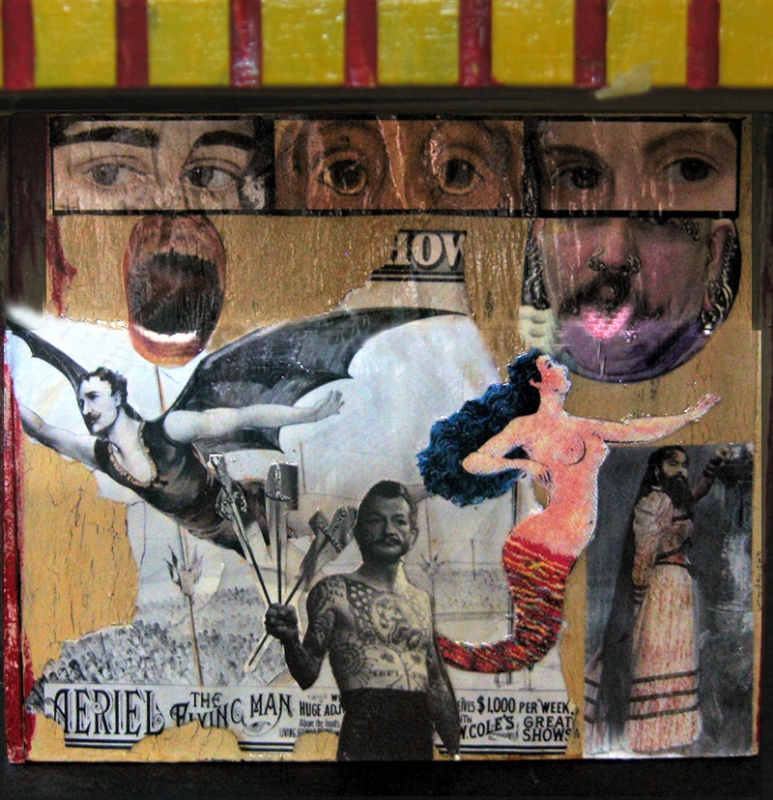 Marcee Blackerby uses mixed media to create works that are as unique as the sideshows that inspired them.
During October’s Gallery Stroll, which will be held Oct. 17 from 6–9 p.m., I’ll be heading over to the Art Access Gallery for the opening of Differences, A Dialogue. The show features 15 artists exploring what it’s like to be different—or a freak. Yes, I said freak, and this group of artists is not entrapped by the word. One of the show’s curators, Marcee Blackerby, whose mixed-media projects have graced the walls of many galleries and arts festivals around the state, is known for her candid approach to life and art. This little powerhouse has never let anything stop her, which, in today’s society, might just make her a freak—but before I offend anyone too much, let’s break down the word “freak.”
The word freak has deep roots in the English language, first popping up in the 17th Century to refer to a fleck of color, then in the mid-1700s, it was used in reference to something of whimsy or fancy. It’s possible that that whimsy or fancy things frightened a few people, and by the mid-1800s, the word freak became the title of shows depicting animals and humans with physical abnormalities. For years, the word freak was dragged around from town to town and used to define anything that wasn’t the norm.
Just as the word has evolved, so have we—by the ’60s, “freak” and “freaking out” became synonymous with breaking out of the confines of a gentrified existence. Frank Zappa claimed that “Freaking out is a process whereby an individual casts off outmoded and restricted standards of thinking, dress and social etiquette in order to express creatively his relationship to his environment and the social structure as a whole.”
The people of the Art Access Gallery are very sensitive to those with differences. Their vision is to “create community understanding that the arts are a universal vehicle to celebrate our differences and ultimately connect people.” They work tirelessly to provide equal opportunities to access the arts—no matter the physical, mental or financial limitations. It is through these efforts that they have amassed a talented group of diverse artists, and—to be frank—in order to be a good artist, one must have a little freak in them. What better group to play with the representation of the word freak than a group of people who understand living an original existence, celebrating diversity and differences and not being concerned with the norm?
The fabulous list of artistic freaks include Marcee Blackerby, Ric Blackerby, Bonnie Sucec, Logan Madsen, Cat Palmer, Travis Tanner, Stephanie Swift, Wayne Geary, Frank McEntire, Linda Kalmar, Mary Wells, Trisha Empey, Grant Fuhst, Brian Bean, Matthew Jones and Doug Wildfoester.
Sheryl D. Gillilan, Art Access Executive Director, says, “As you view this exhibit, we challenge you to think about difference, identity, perspective and power—and what freak might mean 100 years from now.”
Be sure to stop by the opening of Differences, A Dialogue on Oct. 17 from 6–9 p.m. at Art Access Gallery, located at 230 S. 500 W.
Photos: