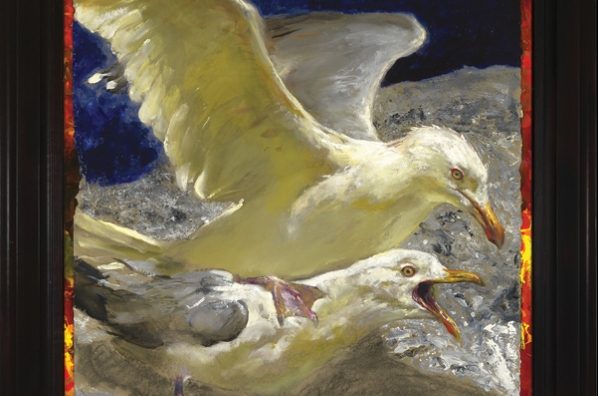 January, the first month of the new year, named after Janus, the Roman god of all beginnings. In January we resolve to change our lives for the better, we set goals: lose weight, drink less, ride or ski 100 days this season … all good resolutions, but may I suggest one more? Try setting the goal to see one art exhibit a month, given the slew of art galleries and the always inviting gallery stroll held on the third friday of every month, this resolution doesn’t require a 12-step program or waking up at dawn every day, a fairly easy and fun resolution to keep, therefore making you an example of fortitude when you declare your resolution successful!

The tools for your quest if you should choose it:

The theme of the Seven Deadly Sins is historically associated with Christian art. Very few contemporary artists have tackled these human frailties, none of whom have done it without the use of a single human subject. In Wyeth’s pieces, seagulls illuminate the characteristics of greed, anger, envy, gluttony, lust, pride and sloth. “Gulls are nasty birds, filled with their own jealousy and rivalries … it always bothered me the way gulls have been depicted through the years … they’re made out to look like white doves and in fact, gulls are scavengers, they can be evil,” says Wyeth. Since the late 1960s, Wyeth has been fascinated with birds and currently has over 200 paintings and drawings of them. This exhibit was first on display at the Adelson Galleries in New York in the Spring of 2008, then traveled to the Farnsworth Art Museum in Maine where the artist has spent many hours painting and observing his subjects, then off to the Brandywine River Museum near the artist’s birthplace and now Salt Lake City. Utah has long maintained a love for seagulls, in particular the California Gull, since the summer of 1848 when swarms of crickets attacked pioneer food supplies. It was reported that flocks of the birds arrived, settled in the half-ruined fields and began gorging themselves on the attacking crickets. In February of 1955, Utah adopted the bird permanently as the state bird.  The Seven Deadly Sins opens January 27. For more information visit slartcenter.org.

Over, under, around and through, two artists at the Finch Lane Gallery want to amend your perception and change the perspective. Trent Thursby Alvey returns to the Finch Lane Gallery with the show Sacred Geometry featuring two-dimensional collages and wall assemblages that combine objects with tactical surfaces. Alvey enjoys working within and through the studies of science, philosophy, medicine and faith. Corey Bowman’s installation allows the viewer to walk around, inside and through space. “I hope to look deeper into the state of the present within urban landscapes through this concept of accumulated time, using cardboard as a sculpture medium to represent layer time. I hope to show that urban landscapes are not devoid of context. Layer upon layer of context is added constantly to add to the relationship and interaction around us,” says Bowman.

The Salt Lake Arts Council’s Finch Lane Gallery is located at 54 Finch Lane in Reservoir Park by the University of Utah Campus. This show will hang from January 8 through February 19 with artist receptions during the monthly gallery stroll held January 15 and February 19 from 6-9 p.m.

This month we lose a great stop on Broadway’s Gallery Stroll , Signed and Numbered Gallery and Frame Shop is leaving its current location and moving the framing business to 2100 South and 2100 East. Everything should be up and running by the first part of January, so stop by, say hi and get your unframed art ready for the new year. [Click here for an interview with Signed and Numbered.]