When I found out the Kayo Gallery would be closing on July 13, all other Gallery Stroll activities ceased to interest me. Over the last nine years, I’ve followed the struggles and triumphs of this little gallery, which launched several careers, showcased international artists and anchored the Broadway Gallery Stroll scene. 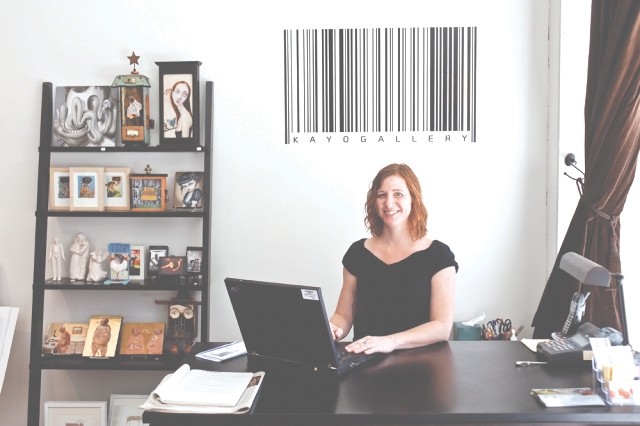 Shilo Jackson closes the doors of Kayo Gallery after six years of curating.

Salt Lake’s urban landscape is in constant flux, whether we’re talking about 30-story cranes creating multi-million dollar projects, or the closing of some of our favorite mom-and-pop businesses. In the blink of an eye, things change––I’ve grown to accept this. Of course, I prefer time to say goodbye. When I found out the Kayo Gallery would be closing on July 13, all other Gallery Stroll activities ceased to interest me. Over the last nine years, I’ve followed the struggles and triumphs of this little gallery, which launched several careers, showcased international artists and anchored the Broadway Gallery Stroll scene.

In the beginning, young entrepreneur Kenny Riches opened the Kayo Gallery as an extension of his parents’ Avenues frame shop, with the goal to provide a place for Utah’s emerging contemporary art scene.  In 2008, a daring young artist and businesswoman, Shilo Jackson, purchased the gallery from Riches. In an interview I conducted with Jackson in 2010, she reminisced on her early motivation to take over the budding gallery. “I really respected what Kenny had started and had a deep appreciation for what he wanted for Salt Lake,” she said. “It was never about turning a profit––owning a gallery is a labor of love, but I do it because I’m passionate about the arts and I think this space is important for Salt Lake.”
Jackson’s passion for art and desire to expose Salt Lake to the best local, national and international art created an incubator for artists to experiment, play with installation and collaborate. Annual shows like the small works anniversary series Round and the Cigar Box show gave artists permission to break out of their “box” and allow the freedom to experiment with talents and mediums.
Landing nationally acclaimed artist Tony Fitzpatrick was a special treat for Jackson, who worked very hard for years to bring the East Coast artist here to Salt Lake. Another hard-won and worthwhile moment for Jackson was organizing established local artists Brian Kershisnik and Cassandra Barney for a show in 2012, which she says was a highlight of the gallery.
Having amazing shows, unfortunately, isn’t enough to keep the lights on. I have spent plenty of time bitching about how patrons need to purchase art and not just admire it on the gallery wall. Eventually, artists (or in this case, a gallery) will no longer be available for your viewing pleasure. Six years of operating in the red takes its toll on not only your psyche, but also your bank account, which forced the closure.
Closing shop will not be easy. Jackson noted how much she will miss the local merchants on 300 South. “The business community around here is like a family––we’ve all had each others’ backs,” she said. However, she is thrilled with the prospect of a legitimate vacation and of Gallery Strolling strictly as an art patron.
For the last hurrah, opening June 21, Kayo Gallery is hosting a surreal show for a surreal time. Artists Sri Whipple, Jeff Christensen, Emily Wood, Chad Crane and Natalia Pierandrei will usher Kayo out of existence and remind us why it was so good while it lasted.
In the words of Kenny Riches, “Kayo was born from a desire to see change in the SLC art scene. I feel like it accomplished its goal, but it’s a shame it won’t live on forever … I hope to see other young people doing the same, but taking it even further and beyond the hills of SLC.”
What’s next? When one door closes, another business opens. Look for an exciting new project from Ron Green of the Green Ant and company taking over Kayo’s space late this summer.
Photos: