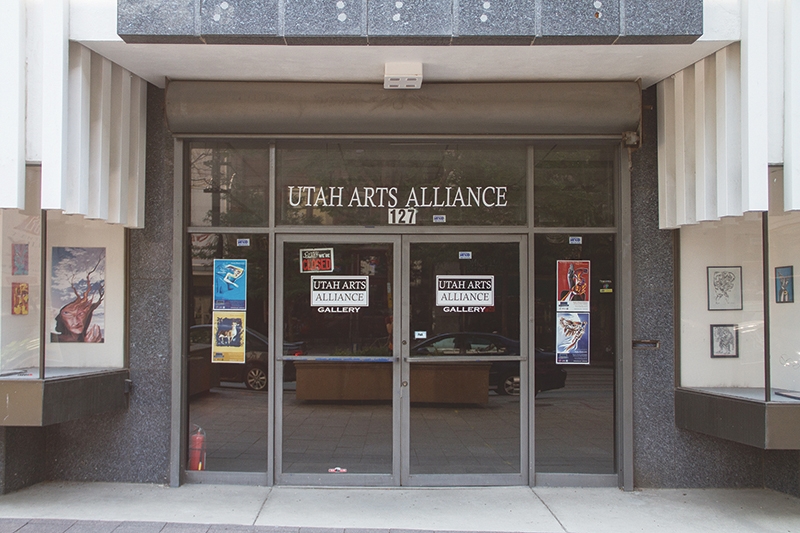 During its time on the block, UAA Main Street Gallery has helped cultivate Main Street to be the bustling street it is today.
Photo: Jake Vivori

I’ve written about a dozen art galleries closing their doors––really, too many and too painful to name––but never have I received a press release with such a positive spin on closing up shop. The announcement: “The Utah Arts Alliance announces ‘Mission Accomplished’ …” That mission: to bring life and creativity back to Main Street. Now making way for the Utah Performing Arts Center (UPAC), the UAA Main Street Gallery can and should feel a sense of accomplishment and pride in what they have helped inspire.

In 2007, Main Street Salt Lake City didn’t look like a main thoroughfare of a bustling metropolis. Boarded-up buildings, broken glass and uncreative, poorly executed graffiti were strewn about. “For years, people have talked about the need for a true arts district Downtown, with the idea that this block would be the cultural core, so we decided the best way to make that happen was to actually do it,” says Derek Dyer, UAA Executive Director.

Over the years, the UAA Main Street Gallery and recording studio Midnight Records have showcased the works of over 600 visual artists from Utah and around the world and recorded dozens of award-winning albums. Not as measurable, but equally as important, this space served as a beacon for the art community, bringing artists and art lovers back to Main Street—whether it was welcoming Gallery Stroll patrons dining at local eateries or giving the business community a midday jolt of creativity. The economic and creative impact of UAA has been felt on the blocks of Main Street, Salt Lake City.

“It is a bittersweet time for us, closing the gallery after all these years. On one hand, it would be nice to reap the rewards of having lasted the hard times on Main Street now that the street is revitalized, but we feel good in knowing that our goal is complete and our work, for now, is done on this block,” says Dyer, but, he’s quick to note, UAA is interested in possibly reopening a new gallery in one of the retail spots that will be part of the new UPAC on Regent Street. So don’t count them off Main Street for too long.

How do we say goodbye? With a big party, of course! The UAA and Derek Dyer are known for throwing a good party, and when you have so many reasons to celebrate (UAA turns 10 years old and has three other highly successful locations), you have to go out in style.

After years of directing, planning and cheerleading Utah’s arts community, Dyer has somehow found time to keep his personal art career moving onward and upward. Recently returning from Europe, Dyer was empowered by the juxaposition of pop art, abstract expressionism, impressionism and neoclassic works he experienced during his travels, helping him conceive his latest show, Icons, Archetypes and Oddities. Think everything from Buddha to Lady Gaga, Alice in Wonderland to Pacman and Mario, and then throw in deep-sea creatures, humans and animals, anomalies and grumpy cats. The varying styles, subjects and media create an almost group-show feel, but the common thread of humanity through the ages, told through many forms and characters, creates the desired unification.

The show opens Aug.16, with the artist reception and goodbye party from 6–9 p.m. at 127 S. Main Street. It will be a great celebration of a gallery and a man taking the old and oddities and creating a new definition of beauty and success.