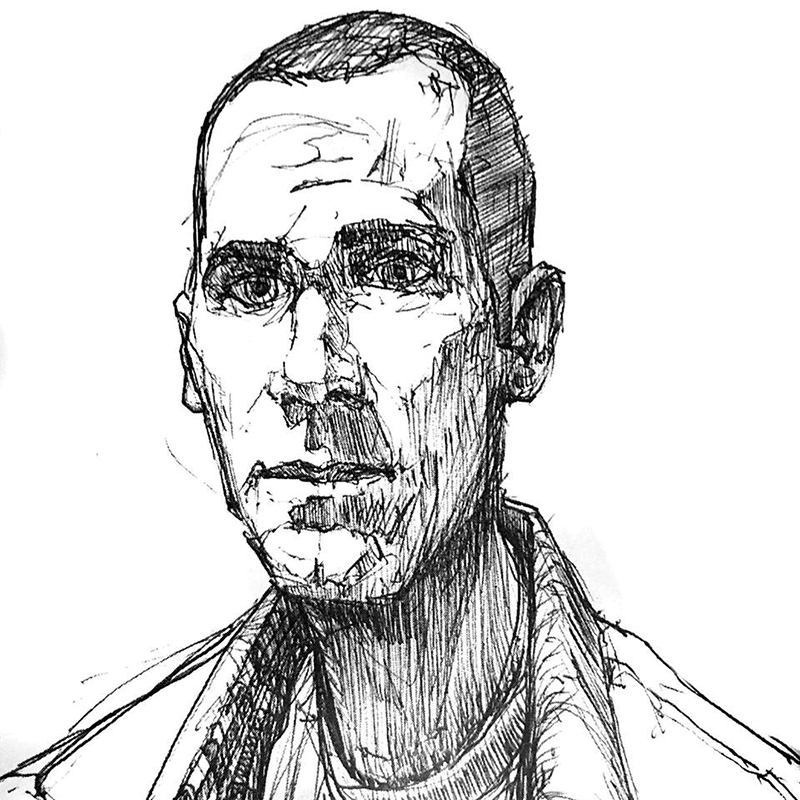 Gallery Stroll: The Art of Being Fletcher Booth

Some people just have a calmness about them—you know the type: They know who they are, have nothing to prove, and are a steady hand—a rock in a storm. Fletcher Booth is that kind of person. Many only get to see Booth as the doting boyfriend and now-husband to the dynamic Angela Brown, Executive Editor of this very magazine, as well as Executive Director of Craft Lake City. Yes, while Booth is quieter than some of us uber enthusiastic “scene makers,” he continually makes powerful ripples in the art community personally and professionally. Unfortunately, Booth’s humble, nonchalant attitude means that, unless nosey friends and writers publicized Booth’s show, opening Sept. 16 at God Hates Robots, no one would know what they were missing.

Booth is an artist, whether it’s as a scholar, a professor, a curator, a creator or an installer. He’s taught at Weber State and the University of Utah, and he currently spends his days with the Utah Arts Council, negotiating and placing pieces of art around the state, from larger cities to rural communities, giving people access to a massive art collection from a variety of artists. This placement and handling of art and artifacts can be quite gratifying. “I feel connected to art every day,” says Booth. “I think that might be why I haven’t felt the need to have my own show recently—I see so much art, it’s like, ‘Do we really need more?’”

Mostly known for his large-scale paintings of authoritarian figures, Booth’s last solo show, in 2004, rocked the art community when some of the pieces were censored for content. Booth once again went with the flow, moving those pieces to another location. His works play with metaphors and symbolism, but his ambiguity leaves the viewer to create their own dialogue. He doesn’t make excuses or apologize for the content. My first experience of seeing Booth’s work on display was a solo show at Weber State University in 2001, where he was teaching at the time. The exhibition, titled Head, was a series of large-scale paintings featuring strong and fierce-looking men. The paintings hung around the room, standing tall over my 5’3” frame. To counterbalance these large pieces, Booth also made a small run of women’s panties with the show’s artwork portrayed on the crotch, taking the attendees from feeling overwhelmed and powerless to nonthreatening and playful. To the dismay of my husband, I currently own two pairs!

Given the past content of his work, one would think that Booth’s upcoming show would reflect the world’s current political and societal stresses. “I was thinking of calling it Shit Show to reflect the current state of the world,” jokes Booth. But life hasn’t been so bad for Booth. As of last year, he married the love of his life, Brown; they adopted an amazing and obedient dog, Hondo; he has the house, the car and a good, creative job—all the benchmarks he envisioned as a young man looking toward his future. “I feel like I won at the game of life, so I’m calling this show Victory. Angela has brought a sense of optimism to my life. I don’t think I was a pessimist before, but more of a realist, and she has taught me how to see the potential in things.” I don’t want to say this show will be a departure from his normal art, because that sense of playfulness has always been a component in his work. Booth did an excellent job of shirking any requests about the show specifics, but I’ve been promised the “biggest, silliest” show he could think of. “I showed my wife these ideas, and she loves them, then laughs,” says Booth. “That’s all I need. Any criticism or complaints are just jealousy—Victory.” For more information on this and upcoming shows at God Hates Robots, visit godhatesrobots.com. Victory’s opening reception will take place on Sept. 16 from 6 to 9 p.m.