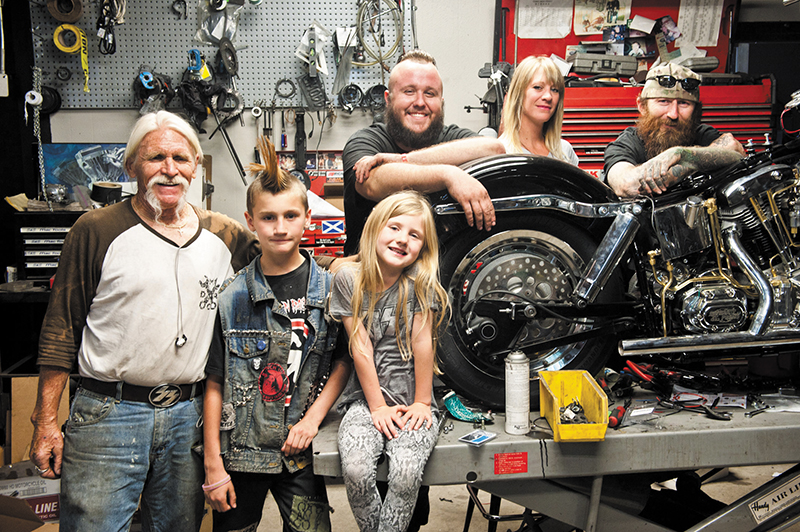 Dirty Rat Moto Cyco is a shop packed with Harleys of every generation in varying degrees of dissection, countless tool chests, guitars and amps and two friendly shop dogs, Natas and Cooter, who play with a cannonball as a toy. Rick and Ashlyn White have both owned and operated the shop at its current location for over nine years. With a combined 60-plus years of experience working on motorcycles, Rick and mechanics Nick Kennedy and Wolf make up the Dirty Rat crew. From oil changes to engine rebuilds, the Dirty Rats offer a wide range of services at a competitive price.

The Dirty Rats are advocates of the “buy local first” mentality, and foster an environment of DIY badassery. “Keep the money in Utah,” says Rick, after he and Ashlyn give me a tour of their impressive home and motorcycle repair shop, located on 1515 South Major Street in Salt Lake City, which they have painstakingly built themselves. They don’t care about competition with other local mechanics: They stay true to their punk rock roots with the “FTF” motto—”fuck the factory”—which Ashlyn says they live by. “Especially with the smaller shops in town,” she says, “to help each other out does nothing but benefit everybody.” Their customers are their family, and support from the local (and loco) moto community has developed a strong cult following, allowing them to live the American Dream. Ashlyn quickly corrects me: “A lot of people say it’s a dream,” she says, “but we call it the American Nightmare—our fun nightmare.”

As I’m shooting the shit with Rick, Nick and Ashlyn, I have the privilege of seeing Rick, “The Chopfather,” in action. A longtime customer and friend rolls in after an incident on I-15 involving some poorly planned construction. I watch as Rick fixed the issue in less than five minutes, sending the customer safely on his way. “Laid-back professionalism” is how Rick and Ashlyn describe the atmosphere around their shop. It becomes more apparent the longer I hang out how much of a family dynamic they have with their customers. “I don’t have a sign on the front of the building for a reason,” Rick says. “We don’t need it—we’ve got really good customers who help us out as much as we help them out.” Referred to as “The Motherfucking Spa” by a regular, the shop often turns into a place of refuge where everyone is welcome and encouraged to ask questions.

Rick says they “don’t see a lot of new, shiny bikes,” but he is not opposed to working on newer models. Rick has watched pop culture influence bike culture, from “the bigger the tire the better” to the Sons of Anarchy chopper trend and ‘70s rat bikes. “Kids are even dressing like they’re from the ‘70s,” Ashlyn says, also pointing out that they’re riding bikes that were never intended to be ridden. Rick can fix them all, though. “Rick fixed our bike on a trip with an earplug and a nail the other day,” Ashlyn says of Rick’s superior mechanic skills. “Dig something out of the dirt and Rick can figure it out.” He’s the McGyver of bikes—once, on a trip to Wendover, he even fixed a bike with a gum wrapper.

As a co-owner of the shop and a wife and mother, Ashlyn, who is incredibly supportive of Rick and dedicated to the shop, says, “It has got to be one of the hardest things I’ve ever done.” But they wouldn’t have it any other way. “My job in this shop is to support [Rick],” she says. “The hard part is him working 24/7 and how much time, blood, sweat and tears [the crew] put in to make each customer happy, but that’s what they’re known for.”

Rick loves seeing people wear out their tires and put miles on their bikes—and the often comical and sometimes tragic stories that come with those miles. As with all families, tragedy will eventually strike, and within the motorcycle community, unfortunately, tragedy seems to strike more frequently. “There’s two types of riders,” Rick says, “those who have crashed and those who will.” Rick admits to at least six different collisions he’s been involved in. Ashlyn tears up when she talks about the friends they’ve lost over the years, and Nick shows me the “burnout” tires on the shop wall that they’ve collected in memoriam of friends lost. “It’s always those left-hand turns,” Ashlyn says, referring to the most common type of car-versus-motorcycle collision, where the car driver either doesn’t see you over their Snapchat or judges your speed incorrectly, introducing their hood to your face. Proper safety gear is never guaranteed to save your life, but your odds sure as hell increase—helmets are a great way to keep your meathead on your tattooed shoulders.

Rick calls motorcycling the tie that binds. “You can have a Mormon next to a murderer and it won’t matter,” he says. Stop by the shop or check out dirtyratmotocyco.com to see some of their work, or just to meet some really cool people.