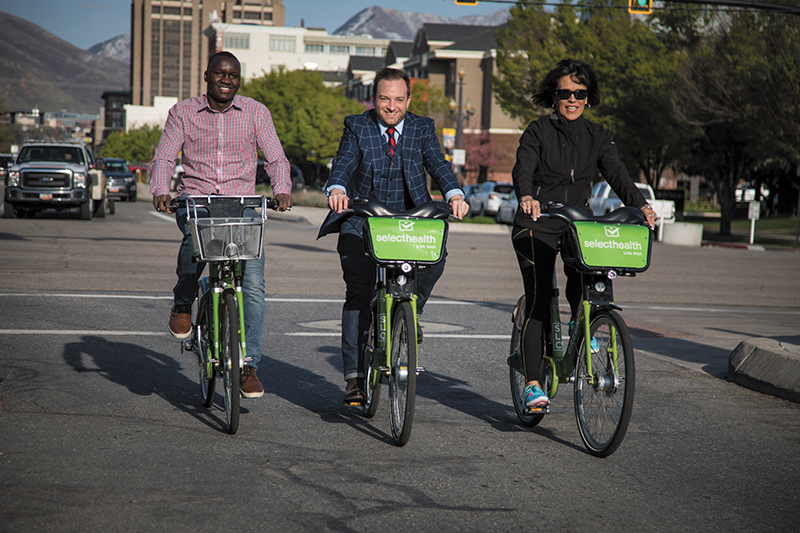 Salt Lake City is booming. Galleries are showing and gastropubs are brewing. The smell of roasting coffee graces the air. There are bountiful bookshops, barbers and bars. With this comes the problems of congestion, the annual wintertime-smog blanket, lack of parking and ride-share-app surge pricing. Enter Ben Bolte, Founder and Director of GREENbike, SLC‘s bike-sharing program, which is entering its fifth year. It provides bicycles parked at stations located around the city that can be rented, ridden to another station and dropped off. “We are trying to create the most convenient system we possibly can,” says Bolte. “To us, convenience is density … For example, we have about 16 stations per square mile in downtown Salt Lake City.”

Many other U.S. cities have bike-sharing programs. GREENbike is SLC‘s own nonprofit program, and Bolte says that they aren‘t operating to make money but to benefit SLC residents by reducing cars on the road and emissions by offering a convenient mode of transportation that is also fun and healthy. They offer a variety of rates and memberships, including a 24-hour pass, a four-day pass and an annual membership, which allows for unlimited hour-long rides. Besides saving frequent users some money, the annual pass includes an RFID card, which users can simply tap at a station to borrow a bicycle, making the process easier and, therefore, promoting more usage. “To date, we have burned 34 million calories,“ says Bolte. “We‘ve prevented 2 million pounds of CO2 from entering our air. We‘ve removed 2.2 million vehicle miles from our local roads, which is about 401,000 car trips.” This is just the sort of impact that GREENbike hopes to achieve, and those figures will grow as more and more people try out the program.

Bolte says that GREENbike isn‘t for people who already consider themselves cyclists, or people who own bikes and ride them regularly, but more to offer bicycles to people who don‘t want to store or maintain a bike of their own. Annual pass holder and SLC resident Fred Makobongo uses GREENbike for grocery shopping and commuting to work. “I don’t know if it’s the millennial factor, but I like the flexibility that GREENbike offers, wherein I can pick out a bike and return it, and that is the end of my responsibility to it,” he says. He also mentions that he uses it to connect with and explore the city, as well as run little errands. He didn’t own a bicycle before moving to SLC. “Once I moved to Utah, I just started biking more and more. The biking that I’ve done the past six months is the most biking I’ve done in the past 10 years.”

Another SLC resident, Valerie Kitchen, first started using GREENbike when her boyfriend moved Downtown a couple years ago. “It‘s super fun,” she says. “I ride down to get my nails done at Mid City Salon. I park my bike, I go in, get my pedicure, [and] go back out. It’s so convenient.” She has found herself encouraging other people to use the program as well, incorporating it into her real estate business. “I thought, ‘What a great gift—when you find somebody a condo Downtown, you give them a gift card for their annual membership and you hand them a helmet,’” she says. “How fabulous!”

Kitchen says that she sometimes uses the bicycles as a catalyst for fun by renting out a bike and seeing where it takes her. On Pioneer Day, she borrowed a bike and rode past the floats preparing for the parade. Though she appreciates the environmental impact of her riding instead of driving, she says that it isn’t necessarily the reason that she uses GREENbike. “I don’t take the GREENbike because I think I’m being green,” she says. “It’s just that it’s a more convenient mode of transportation if you’re going around the city than getting your car out and then circling, looking for a place to park it. There’s no reason to.”

Bolte says that despite the benefits of decreasing auto emissions and promoting an active lifestyle, the number-one reason they hear from people for using GREENbike is convenience. The stations are parked at key locations around the city, with the idea that there will be a bike where you are and a station near where you want to go. There is a mobile app that informs users where the nearest station can be found, making it easy to see if GREENbike is right for the trip. “The only other system in the country that has more [stations per square mile than SLC] is New York, because often with programs like this, there are lots of politics involved in where the locations go,” says Bolte. “We pretty much took a hard line and, luckily, worked with a lot of forgiving and kind people that allowed us to do what was best for the system, not just what was politically expedient.” With all of this taken into account, GREENbike seems to be an asset to the community and a shining example of Salt Lake City punching above its weight when it comes to thinking about environmental impact and quality of life in SLC.