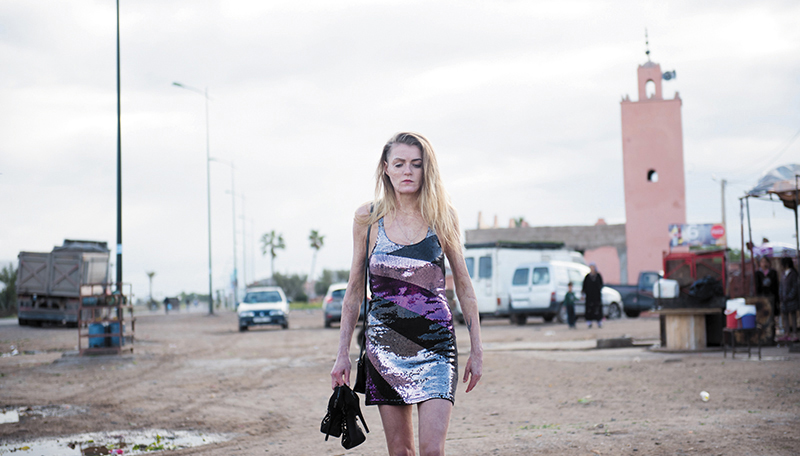 Dutch director Sacha Polak’s Sundance 2019 film, Dirty God, opens with what almost looks like an alluring red-rock landscape. The up-close shot soon reveals that it’s the acid-scarred skin of lead character Jade, played by Vicky Knight. It’s an intimate vantage point that immediately places viewers alongside Jade to confront her struggle to feel beautiful after incurring burn scars, on top of being a single mother. “It’s a story about reclaiming your life and rebuilding your confidence,” Polak says. Dirty God, a narrative film, jerks Jade around, from her dissociated toddler to cruel coworkers to webcam partners on the internet. At this year’s Sundance Film Festival, Dirty God is poised to resonate with authenticity via its valuation of beauty through acts of self-love.

Set in London, Dirty God finds Jade trying to reconnect with her daughter, Rae (Eliza Brady-Girard), after having recovered from an acid attack by her ex. Rae cries when she sees Jade wearing a recovery-related, clear-plastic mask over her scars—and also with it off, presumably not recognizing her mother. What’s more, Jade navigates her comfortability and that of men around her. She stands back during nighttime outings with her friend Shami (Rebecca Stone), who easily engages with men and attracts Naz (Bluey Robinson). In the thick of it all, Jade pines for a solution to her scars so she may once again feel beautiful.

Polak considers it lucky to have casted Knight. While Jade’s burn scars in the film are from a kind of acid attack common in the U.K., Knight’s burn scars are real, from a fire as a child. While working a music festival in 2012, the idea first struck Polak when she saw bystanders staring at a girl with facial scarring. After having spent some time in the U.K. on a different project, Polak started creating Dirty God circa 2014. It was through the U.K.’s Changing Faces organization that Casting Director Lucy Pardee found Knight, who was in just the right age range for the role. Knight is in her early 20s, and “there are not that many girls who are the right age who are burn survivors,” Polak says. Moreover, “[During] this time of Instagram and Facebook and this selfie culture, I think it’s a difficult time for that age,” says Polak, who notes that those in her cast in that age group persistently take photos of themselves, each other and for various film-industry matters.

Dirty God is Knight’s first foray into acting. “She was amazing,” Polak says. “She auditioned with everybody else in the film.” Amid a solid performance, tight shots on her and her interactions with other characters intimate the tension of Jade’s self-rediscovery. The photographic decisions for tight, wide and graphic shots allow for an experience as close to Jade’s perspective and feelings as possible.

Polak says that each of her films deal with love and sexuality. Additionally, in her auto-documentary, New Boobs, she addresses the physical changes of cancer-defying breast implants, which resulted in scars. Dirty God furthers Polak’s exploration of female empowerment, strength, identity and “learning to deal with it even though things have changed,” she says. One striking scene in the film depicts Jade interacting with a man via webcam, touching herself. Though she situates the lighting and camera so as not to show her face to men during these online dalliances, it’s a moment of sexual buttressing for Jade. Awash in blue-and-red lighting, Jade’s face—scars and all—superimpose on her underwear with surreal, almost psychedelic panache. It communicates Jade’s budding self-affirmation in light of her injury. “This internet sex has [a connotation] that it’s dirty or whatever, but I wanted it to be liberating for her,” Polak says. “She’s a single mom—she cannot bring these guys to her apartment, but through her computer, she can be with these guys, and she can feel beautiful, so it’s also liberating. The idea was to not make something raw in that particular scene, but to go into her mind and into the feeling of sensuality.”

In her quest for beauty and a surgical fix for her scars, an underlying conflict is Jade’s identity as a mother. Rae often stays with Jade’s mother, Lisa (Katherine Kelly), which also deepens the rift between them and Jade. Without giving too much away, Polak says, “For us, it was really important that the solution was not in finding a prince, but that it would be deeper—not ‘in the end, she has a boyfriend,’ and everything’s good like in a fairytale.” Herein, a sense of dimension in Dirty God arises from Jade taking control of her life and transcending the limitations of her appearance. “The most important thing was not making a depressing film,” Polak says, “but making a colorful film and to tell the story from her perspective and her strength.”

Dirty God is in the “World Cinema Dramatic Competition” category at Sundance. Polak has won a CICAE award for her film Zurich and a FIPRESCI award for Hemel, and Dirty God is Polak’s Sundance Film Festival debut. “It’s really fantastic,” she says, especially since it’s the first Dutch film to be in the World Dramatic Competition at Sundance. “I’m really proud, and I’m also really curious about the festival. I’m really excited about it.” Dirty God is certainly an exciting prospect for Sundance audiences—it’s palpable and stirring.