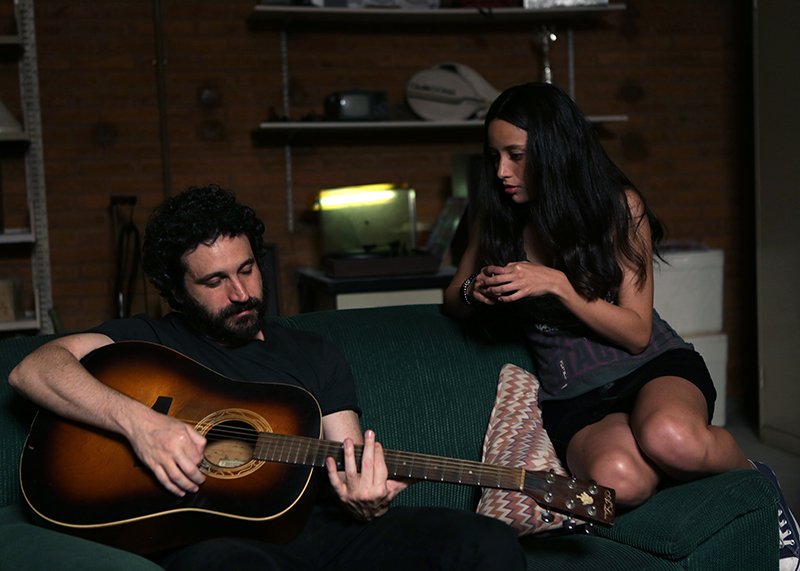 The Slamdance Film Festival celebrates 25 years and runs Jan. 25–31 in Park City. “A first film is a time of possibility, risk-taking and madness,” Slamdance President Peter Baxter says. “For 25 years Slamdance has broken boundaries by championing these films and the artists who’ve made them. We’ve been criticized and celebrated for doing so. That’s the way we like it. We are Slamdance.” Here, find featurettes about Slamdance ’19 films. Go to slamdance.com for more info and SLUGMag.com for more Fest coverage!

“I’d take the bus and cross the city to see my favorite band play, in whatever dump. And I’d arrive alone, but was never alone. Because they were family.” Boni Bonita edges in with these imploring words, uttered over roving garage rock. “You’re my family today.”

It’s autumn 2007 at a crowded concert in Brazil, and Beatriz (Ailín Salas) stands, awed by the unseen rockers, face lit up only by stage lights. Amid her mother’s death and a strained relationship with her father, the 16-year-old has made her way from Argentina to Brazil. There, she begins a relationship with the 30-something Rogério (Caco Ciocler), a musician trapped at a standstill beneath his grandfather’s musical legacy. The pair spend their days at Rogério’s family beach house: Rogério is constantly drinking, guitar in hand, and often shirtless. Beatriz is constantly smoking and often unsmiling. Her stomach is usually covered, hiding scatters of self-inflicted scars. Seasons and years unravel: The two are tender, then destructive; they fight, then make up; Rogério remains at a dead stop—Beatriz doesn’t. Behind their toxicity persists the empyrean Jurumirim Reservoir—its gleaming waters, verdant lands and cloud-roaring skies.

Over four laconic chapters, writer/director Daniel Barosa’s Boni Bonita is an uncluttered chronicle of loss: loss of self and family, dreams and direction, youth and innocence. And it remains a coming-of-age story. “I didn’t have a story or a ‘catch,’” says Barosa. “I only had in my head Beatriz and this decadent rocker.” Brought to life by Salas and Ciocler’s excellent performances, Beatriz and Rogério go on to become archetypes—or artifacts—of two respective generations’ languor, frustration and drift. “I idolized it all,” says Barosa of his own experience in São Paulo’s indie scene. “But as I grew older, things changed. I saw that … everyone was as lost as I was.”

Boni Bonita was shot over three years and magnificently across three formats: Super 16, 16 mm and digital. “When writing this film, I always pictured it with a nostalgic look,” says Barosa, so he and Directors of Photography André Dip and Caio Pedron “decided to use different stocks, formats and lenses to accentuate the passage of time.” The result is beautiful, as much a sensuous visual gradient as it is the passing of days and years, the cycles and chapters through which we grow up. –Kathy Rong Zhou

Read the full Q&A with director Daniel Barosa below. For more information about Boni Bonita and the 2019 Slamdance Film Festival, visit showcase.slamdance.com.

SLUG: Boni Bonita was shot over three years across S16, 16 mm and digital. The film footage is stunning. I’d love to learn more about your decision to shoot across these three formats, and your commitment to the power of shooting on film. What notable pre- or post-production challenges and triumphs did you encounter?

Daniel Barosa: When writing this film, I always pictured it with a nostalgic look. I’m a film stock buff, so while discussing possible looks with Caio Pedron and André Dip (Boni‘s Directors of Photography), we were sure we wanted to shoot on film. Kodak also gave us incredible support, which motivated us even more. We decided to use different stocks, formats and lenses to accentuate the passage of time in the story. We shot with old Zeiss lenses on Part 1, more modern Cooke lenses on Part 2, and then migrated to digital on Parts 3 and 4. We tried to make the transition as organic as possible, though. André Dip chose to work with pro-mist filters and vintage lenses (including an old Lomo lens he had) during the digital phase. It all gave the film a sort of gradient look; we go from old film stock to a strange digital, but it’s all very smooth and not meant to seem like a sudden change that draws too much attention.

The pre-production of course involved a lot of tests. We had to find the right camera (it’s not that easy to get good, working 16mm cameras in Brazil nowadays) and were lucky to find a rental place called Hagadê, which used to represent Aaton in Brazil. It still has some cameras that are working great, and Hagadê’s owner helped us in the whole process. Kodak’s support was also key. They indicated some good labs for us in Latin America and helped with extra film stock. Some material we developed in an independent lab from an Argentinean film school ([Fundación] Universidad del Cine) to get that dirty old stock look, while other materials we developed in Brazil and in Mexico to get a cleaner look. It all depended on which period of the film it was and the look we wanted to give.

So, all in all, it was a lot of work to get all these schematics working, but it was totally worth it. The film looks beautiful and different. A lot of people talk about it. I’m sure film stock will make a comeback (it’s still used frequently in the USA, right?), and soon it’ll be easier to shoot film again in Brazil.

SLUG: You note in your director’s statement that you drew on your own experiences in São Paulo’s early 2000s indie scene. What more can you tell us about the foundation for the script? What urged you to create and follow Beatriz and Rogério’s stories?

Barosa: Ailín and Caco were a Godsend! This film wouldn’t be what it is without them, and I’m lucky to have worked with these two talented and acclaimed actors because the script started with the creation of the characters. I didn’t have a story or a “catch.” I only had in my head Beatriz and this decadent rocker (who eventually became Rogério).

When I was in high school, in 2001, Nikolas Maciel (Boni‘s Executive Producer) and I were very into punk rock, hardcore and indie music. I’d go to all the dive bars where local bands would play in these small improvised stages with horrible acoustics—heck, I even started playing in a band while I was barely 16. So, a lot of Beatriz and how she sees Rogério’s world and music came from personal experience. Writing Boni Bonita, at first, I didn’t realize it, but slowly it hit me. I’m actually projecting a lot of myself in Beatriz. I’d go out to these places were everyone was older and seemed so wise, confident and sure of where they would be in 10 years. I idolized it all. But as I grew older, things changed. I saw that a lot of it were false idealisms and that everyone was as lost as I was.

The script also had amazing help from fellow director Barbara Sarasola-Day, who worked as a script doctor in the film and helped broaden Beatriz’s character. She also helped a lot with Rogério. He was a tough character to work with because he is so dislikable, but so sad at the same time. In the end, I think the story has its significance by showing a toxic relationship between men and women that, a couple of years ago, people wouldn’t even [have given] a second thought. Thankfully, nowadays it’s different. I believe the film follows this same logic in its progression of time.

SLUG: Lastly, what artists or works did you look to in the making of this film, if any? And can you tell us about the decision to have Apeles provide the original soundtrack that anchors Bona Bonita?

Barosa: The influences are many and all very different from one another. I threw it all in the blender, and I guess something came out. Rohmer and Cassavetes have always been a huge influence for me, and I feel their cinematography is very palpable in Boni Bonita. There were a lot of bands (some I’m familiar [with] and some introduced to me by Eduardo Praça from Apeles) that were essential to create the film’s mood—chaotic Brazilian bands such as Ludovic and Vzyadoq Moe, for example. Ney Matogrosso and his music was also a huge influence, and when we got a chance to have him do a cameo, we just couldn’t believe it!

I also got a lot from Greek mythology when writing the characters, especially Persephone’s myth. And a friend, after reading a first draft from Boni Bonita, recommended to me Jennifer Egan‘s work, and I fell in love with her writing. It shed a new light to the film, which is always welcome when you’re developing the same project during three years.

As for Apeles (Eduardo Praça), I’ve worked with him in almost all my shorts. We’re childhood friends and always shared similar ideas, inspirations and influences. So it was incredible to have him do the original soundtrack. We talked about how the music would sound and what type of music Rogério [would play] since the very beginning, when I only had a treatment for the film. We discussed that the music in Boni Bonita would be sort of intermission pieces, but that would also help explain the characters through melodies. We’re very happy with the results. The music shows Rogério’s sadness. It reinforces Beatriz’s anxieties.

This interview has been condensed and edited.