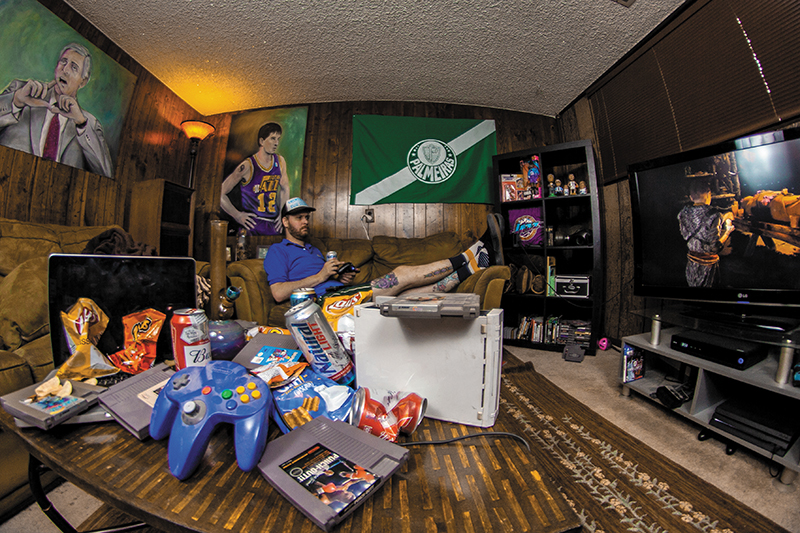 It’s summertime, it’s nice outside, and we are in Utah. Numerous mountain trails, lakes, streams and parks are all within quick reach for us humans to enjoy. And I’m like, why the fuck would I go outside and do stuff when I can just enjoy it vicariously through someone else’s Instagram and build up a bunch of champion points for my online guild? I don’t know if video games count as a vice or not, meaning that I don’t know if they have 12-step meetings for people who play them as much as I do. Regardless, I’m definitely a digital crack fiend. Oh well.

Sometimes I think about what my real life would be like if I put as much effort into it as I do my video game life. Like, I’ll spend hours decorating my guild hall home when I’m playing ESO (which means Elder Scrolls Online, for all you newbs) while sitting in my real home in a pile of filth. You can actually cook food in that game. I can’t even boil water in real life. I’d probably be making six figures if I never started playing video games. I’d also probably have a boat and I’d also probably hate my life—as my longstanding theory goes that most people who own boats totally fucking hate themselves.

Besides drugs and alcohol, I don’t think there’s a better way to ignore your kids than by playing video games. I don’t have kids, so I get the luxury of ignoring the rest of reality instead of some unwanted little spawn. But unlike drugs or alcohol, ignoring your kids with video games is exceptionally evil because it can make them super jealous. Kids love playing video games. They really aren’t ever going to be jealous of your hangover or domestic abuse that the booze can bring.

And just like church and cults, video games can be ritualistic. For serious gamers, it’s not like they just fire up the Xbox and start smashing buttons. There are essential non-electronic accessories that complement a fulfilling online dungeon raid: a two-liter of Mountain Dew, a bag of sunflower seeds, copious amounts of beef jerky and a clear expectation that you won’t be getting laid anytime soon.

A couple of bong rips before joining up with your Call of Duty brothers won’t hurt either. Smoking some weed can help with the PTSD that realistic war games can render these days. However, drinking and gaming is akin to drinking and driving. I don’t do either. Though gaming while impaired isn’t nearly as dangerous as drunk driving, it can be just as hard. And though I don’t advocate irresponsible drug use, if you really want a good time, steal some of your little brother’s Adderall and play the new Super Mario Odyssey. You’ll be awake for the next 16 hours, but it will only feel like three.

When I was a kid, I was so fucking good at The Legend of Zelda. I remember being 8 and it seemed like my whole neighborhood got Nintendos on the same Christmas. I was so good that, one day, the neighborhood bully befriended me to play Zelda with me. This struck me as odd—like, why is this asshole being nice to me? You see, I was way ahead of every kid on my street in the unofficial race of who could beat Zelda first. The bully knew that, and what he did to me was more sinister than any wedgie or gut punch. He brought over his copy of Zelda, and while I wasn’t looking, he swapped his copy for mine, knowing that he hadn’t done shit on the game.

I naïvely failed to grasp how all my progress on what I thought was my game was lost. In fact, I didn’t know this had happened until he confessed to me in high school that he did this. He still thought it was funny. I didn’t. If you are reading this, I still hate you to this day, Danny Kasteler. I hope you never, ever rescue Princess Zelda, and if you have children, I hope that Donkey Kong eats them in front of you.

Needless to say, video games have come a long way from the days of 8-bit Nintendo, which still fondly resonates a magical nostalgia with people in their late 30s. From gigantic, open-world adventures to shooting bad guys while getting shit-talked on by some 14-year-old kid halfway around the planet, there’s a special brand of poison waiting for you no matter what. And once virtual reality systems drop in price, we seriously are all fucked. No one will ever leave the house or put on pants again.