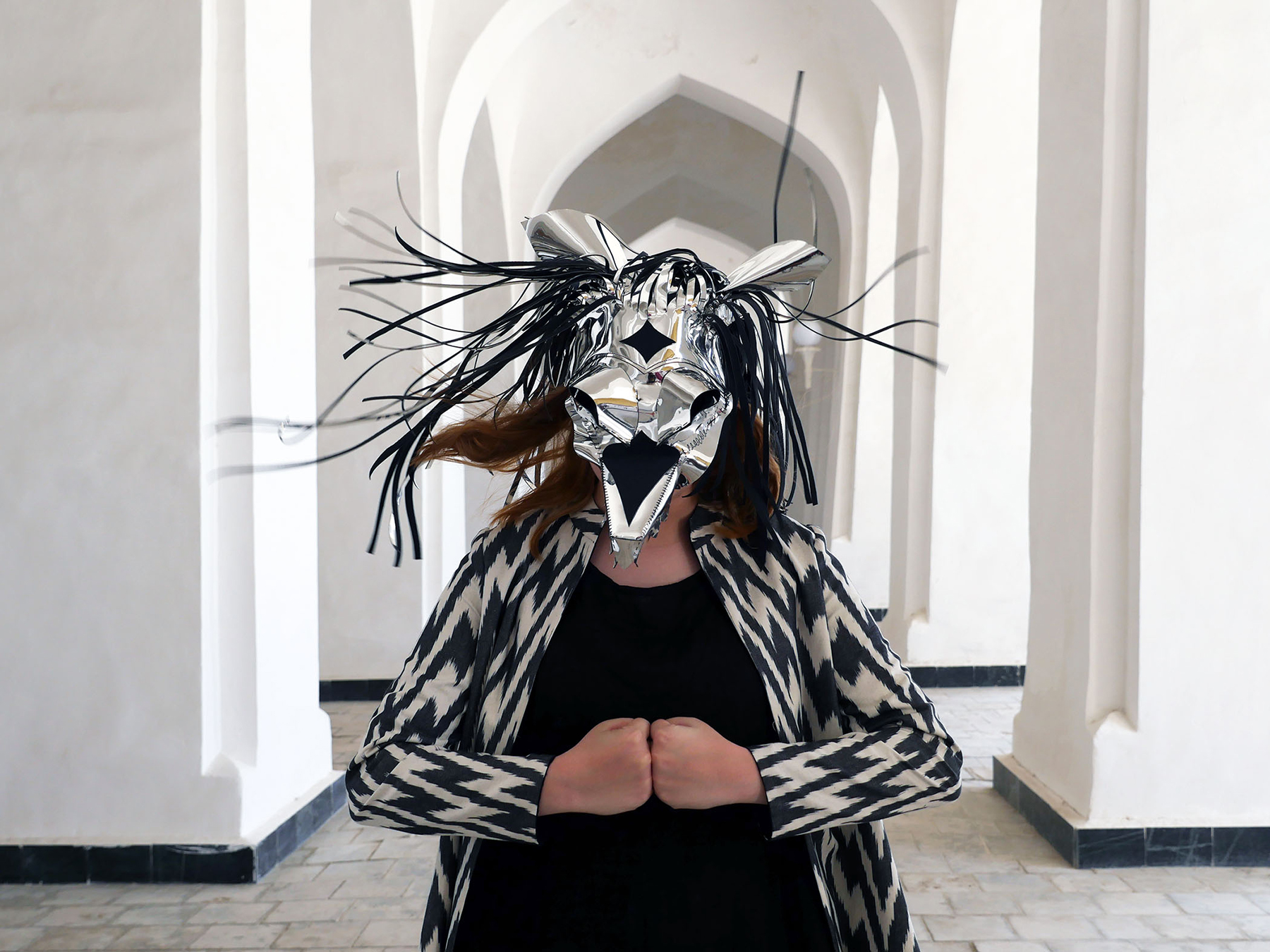 The Other I: Marisa Morán Jahn

MIRROR | MASK is an exhibition by Marisa Morán Jahn running at the Utah Museum of Fine Arts that asks us to consider questions of identity, the self and the other through various media. Each piece depicts people wearing masks that obscure the face and instead reflect back the environment surrounding them—including you, the observer. “It was inspired by Bruce Lee‘s ‘Hall of Mirrors’ scene in Enter the Dragon,” Jahn says. “His sensei/master says to him, ‘To vanquish the enemy, you must destroy the illusion.’ I kept wondering if this was an allegory about truth being opposed to illusion, and I thought to myself, ‘But the way that I see truth is through another person.’ So I looked high and low for reflective material to create a mask that would reflect and distort the other person.”

It’s a simple effect that conjures complex questions, art that challenges the viewer’s conception of its base parts. What makes a mask? What happens to the self when you wear a mask? What sort of masks do we put on others, often without realizing? It’s a flexible metaphor during a time when the concept of the “other” is invoked in daily discourse.

Though Jahn uses all kinds of media to explore the concept, her photography pieces are the most striking. “The Sentinel” depicts the profile of a person wearing one of Jahn’s masks, and the effect of their construction is apparent: This particular mask hangs off the person like a helm, cascading down layered pieces of shiny material. These masks are mirrors in the sense that they reflect, but they are not strictly utilitarian in the sense of, say, a bathroom mirror. They distort reality before ever claiming to report on reality. So the experience of looking at a subject, then, is often a process of reconciling what’s literally in the frame of the picture with what’s reflected, sometimes two wildly different images. That reconciliation is where the work of seeing one’s self in the other—and vice versa—really happens.

In “The Sentinel,” it’s difficult to focus on the face and the reflection at the same time. Both contrast harshly, despite this being one of the few masks that doesn’t completely obscure the subject’s face. You get the sense that if the person were moving—were it not a still photograph—it might make you nauseous. The colors and world reflected are more dazzling and alluring than our usual perception allows for. Each image grabs parts of the sky and clouds, the brown and earthy land, and even an intense, otherworldly red. Combined with the slight visage of the person wearing the mask, I found myself moving between a feeling of being grounded in and estranged from my own perception.

This world-distortion is probably the most basic way in which the masks give us a sense of the other. The composition of each piece also contributes. “The Source” depicts someone wearing another mask with black, hair-like strands that are splaying out as the person pushes their fists together. The piece is set in a great, white hall, so the mask does little to warp its muted surroundings. More prevalent, is the particular way that Jahn invokes the sense of Greek and Asian rituals she cites as inspiration for the exhibition. These ceremonies focus on transition between life and death, often as a metaphor for stages of adulthood. “The masks transform the individual and segue them into the next state of life,” Jahn says. That “next state” may not be a higher rung on a progressive chain, either. “The Source” probably argues this best as the mask-bearer looks to be older yet still experiencing a moment of transformation.

In 2018, the ubiquity of screens and mirrors causes its own kind of reflection, a practice that reinforces its own fascination. “I think it’s baked into the Western subconscious,” Jahn says, “the idea of self-reflection, conflating visage with essence. I’ve always been interested in mirrors and, in undergrad, wrote a paper about Rembrandt and Velazquez’s use of mirrors in self-portraiture. I’m interested in modes of looking and what this says about culture.” MIRROR | MASK is a good representation of the way that Jahn likes to create works unbounded by any specific concept or medium. “I work between both,” she says. “I love sewing. I also love filmmaking and holding the camera … voiceovers and set design … making silkscreens and doing digital works.” The list of interests goes on, and you can even see and wear some of the masks she made as part of the exhibition.

Jahn has an impressive resume. Based in both Cambridge, Massachusetts, and New York City, she’s a Visiting Artist at MIT’s Department of Art, Culture and Technology, as well as an Assisting Professor at The New School. She also co-founded Studio REV-, a nonprofit that helps “non-artists,” those we tend to think of as outside traditional creative spaces such as low-wage workers, techies, immigrants and teens, produce art about their own issues. “This can be formal arrangements like partnerships with the National Domestic Workers Alliance to the guy on the plane to Kazakhstan who is in the pharmaceutical business who, while I was sewing, ended up getting involved.”

MIRROR | MASK runs at the UMFA from August 16 to December 9. You can plan a visit at umfa.utah.edu.