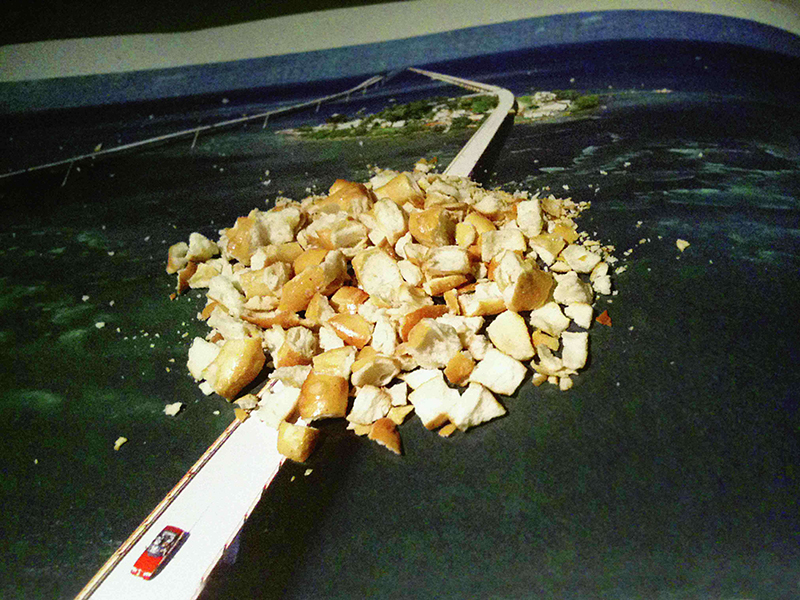 Visiting the Brigham Young University Museum of Art might not be on your summer to-do list. But it’s worth the drive. Curiouser by Nina Katchadourian is the magnum opus of the BYU Museum of Art’s summer spread, and the supporting acts in the building are well-rounded and paint a surprisingly political picture for Utah County. The biblical idea of exodus is entertained through photographs, documentary film, charcoal drawings and ancient paintings, with a finer point being drawn regarding the ever-important topic of refugees. Dana Gluckstein’s Dignity: Tribes in Transition takes a head-on approach with striking, black-and-white photographed portraits from peoples across the world. At first glance, a viewer might associate the images with times long gone or distant—however, much of the work was printed in the last 30 years.

Adrian Paci, an Albanian refugee who fled to Italy with his family, created a short film in which his daughter tells rapt fire-and-brimstone stories about imaginary animals. It’s easy and completely devastating to see how the young child’s violent life experiences have informed her play. In Rick Schaefer’s The Refugee Trilogy, monochromatic, charcoal depictions of epic land, water and border crossings are both theological and American Gothic. Among the angels and cherubs are simple agricultural landscapes being left behind or swept away by flood, famine or fire. To Magnify the Lord: Six Centuries of Art and Devotion features godly paintings in the classic style from the 1500s and on, deepening the moral question of displaced peoples.

Where does Katchadourian, a contemporary, playful artist, come into this depiction of rootlessness? Curiouser is a multicultural narrative with a tin-can-on-a-string effect, traveling from Katchadourian’s native Finland to her current home in Brooklyn—a particularly poignant emphasis being placed on the in-betweens. She humorously interprets the distances through maps, language, nature and other creative systems, while not neglecting to point out the complexities of being neither here nor there.

In World Map, Katchadourian reimagines a map by cutting and pasting countries according to perceived cultural importance and significance. There are allusions to colonialism and ethnocentrism, with Western Europe looming ominously over Africa. In the nearby Finland’s Unnamed Islands, she places tiny pieces of Finnish islands from a map and places them in a film slide container, as one would a nature specimen.

Mended Spiderwebs is a photographic series that documents an illuminating experience in which Katchadourian attempted to repair broken spider webs in Portugal with her own red, woven thread. The spiders repeatedly rejected her painstaking improvements and discarded the thread in piles below the webs. Though visually poetic, the intellectual idea of human’s imposition on nature, or perhaps even on other groups of people, is even more striking. Katchadourian refers to these types of encounters as “uninvited collaborations with nature.”

In the memorable Talking Popcorn, a “sound sculpture” is displayed, which is able to translate the popping noise of corn into Morse Code. A daily journal of the translations were kept, and the first word spoken by the machine (“We”) is eternally bronzed and in a case. Vernacular is a traceable theme for Katchadourian, who also worked with a linguist in Accent Elimination to neutralize the speech of her parents (her mother is Swedish speaking Finnish and her father is Armenian), and then learn the dialect herself. A row of televisions project portions of this frustrating and largely fruitless experiment, which highlights the effect that America can have on so-called mother tongues.

Working with mediums presented to her, Katchadourian can transform a forgettable scenery into a telling reflection. In Sorted Books, she creates haphazard poems via the titles of stacked or aligned book spines. The Genealogy of the Supermarket is a visual “family tree” featuring familiar faces of American capitalism. Perhaps her most ingenious twist on the ordinary is showcased in her airplane series, Flight Log and Seat Assignment. Using primarily SkyMall magazine pages and airline snacks, Katchadourian created over seven years (200 flights’ worth) of in-flight collages. These pieces are modern and breathtaking from afar, but one has to chuckle when a closer look reveals a piece of Cheetos or a pretzel stick.

Lavatory Self Portraits in the Flemish Style is the show stealer, profound despite its laugh-out-loud hilarity. In this photo and video series, Katchadourian fashions herself 15th-century-style headgear out of paper napkins or whatever else she can find in-flight, and documents them via camera phone. There is a cheeky nod to fine art portraiture here, as well as an assumption of identity that leads back to the overall migration theme of the exhibition.

For an art experience that is both worldly and close-to-home, make the time to visit Curiouser and the other exhibitions mentioned at BYU Museum of Art (Campus Drive, Provo). Katchadourian’s work will be on show through Aug. 11.  For hours, parking and admission information, visit moa.byu.edu.