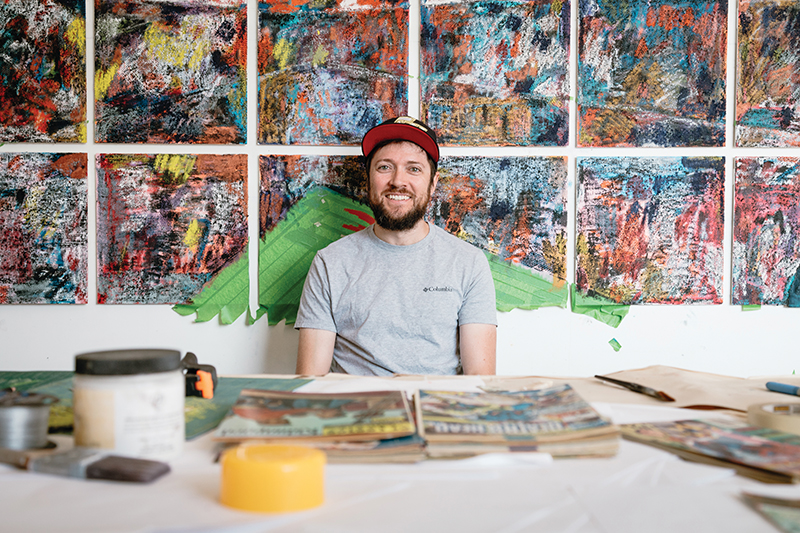 No Man’s an Island: Andrew Rice

Andrew Rice and I are standing on the wall outside his studio, looking at one of his older pieces, “Walls Keep Shifting.” It’s a mixed-media piece of oil that’s applied to a mesh netting, the kind you get when you buy a bag of oranges, then put to a canvas. Rice applies layers of color after each has dried, finishing with a heavy black. The effect is a thick and textured canvas from which the underlying color feels scuffed and imprinted. It plays with the eye like a Pollock, but there are clearer borders, visible lines and more intent. Rice has been experimenting with this for a while. “I’ve always said, ‘OK, this is gonna be the last piece I do in this style,” he says, laughing, “’cause one, these fuckers are expensive.” The oil paint pens he uses to create the effect are expensive, and the work we’re looking at is similar to what he’s creating for his upcoming exhibition at God Hates Robots on Sept. 21.

On the other side of the wall inside his studio at Poor Yorick hangs one of the unnamed, work-in-progress pieces for the upcoming show. It’s a six-by-three grid of canvases, each spaced to have a thin border inbetween. They look a lot like the work on the other side of the wall, but for the moment, they lack any black or much of any added white. “I’m feeling very vulnerable,” Rice says as we look at the unfinished grid. “Black, for me, pulls everything together. It creates the unification of the piece. It’s the vastness of the color and the medium, how thick it is off the page. It pulls you in.” He’s experimenting still, following the process wherever it takes him and trying to express the allure of his own work.

Rice is frank. He’s not exactly sure why he continues to explore this style—which has become its own series, in a way—but it does seem to be rooted in the process. “I’m drawn to the ‘making of’,” Rice says. “That’s one of the important things about art for me. It’s not necessarily about the final product.” He immediately qualifies this. Yes, the final product has importance, and the reaction of the audience matters, but the artist’s role runs deeper. “I think there’s a little bit of the responsibility of the artist to make and to keep making,” he says. “Even if you’re making the same thing, you’re still putting that out into the world. You’re exposing that energy. You’re contributing.”

This is one of the things Rice loves about being a teacher. While he’s showing at several museums around Utah and Colorado, he teaches part-time at the University of Utah. “As an artist and a teacher,” he says, “it feels less capitalistic. There’s an intrinsic contribution.”

Rice grew up in Colorado and moved to Salt Lake City around a decade ago. Like many grads, he wasn’t sure what he’d do first, but coming from a small town near Boulder, he knew that he craved both city life and access to skiing. Once he made it to Salt Lake City, he stayed, eventually completing his master’s program in 2013. What’s kept Rice embedded in Utah’s art scene is similar to the reason many artists cite: He genuinely likes the city and its budding energy. “I’ve seen the community change and grow,” he says. “It’s stronger than ever. You have [at the time of the interview] Craft Lake City’s DIY Festival coming up, and that’s growing every year. The official spots are in flux … You think to 10 years ago and think of 300 South. Broadway had a slew of small, little to larger galleries of different levels of prestige. There were a lot of spots for people, and I think we’re getting back to that. God Hates Robots is one of those spaces and one of the reasons I was excited [to show there]: It has a DIY vibe, and it’s not like, ‘We need to sell all your work to keep the lights on …’ They’re interested in fostering what the artists wants to do. The shows I’ve seen there have all been wildly different.” In Rice’s eyes, Salt Lake City is regaining a momentum it once had. “We’re in flux, but we’re growing,” he says.

Rice’s showing at God Hates Robots is far from his first. With a decade on the scene, he’s shown at the UMFA, UMOCA and many others, and the style of artwork he’ll be showing at Robots doesn’t even showcase his printmaking, which is accomplished in its own right. Many of his printmaking pieces, most of which are black and white, feature an astronaut character moving through various spaces. In these pieces, Rice maintains a conceptual through line—the lone figure moving through a world that demands a degree of isolation to thrive. Much like the white grid and leading lines of his more abstract work, Rice’s astronaut navigates lonely spaces through his suit, constantly mediated for his own safety. “It’s something I think about a lot,” Rice says. Walls and boundaries are becoming more explicitly political, but for Rice, it’s not about putting up boundaries just to section off—it’s much more about navigation, what’s necessary to make sense of the world, and how even our smallest partitions can be made unconsciously.