00:00 / 15:25
Spotify Stitcher
RSS Feed
Share
Link
Embed
The first time I visited the Daughters of Utah Pioneers’ (DUP) Pioneer Memorial Museum (PMM), despite being heavily medicated and unable to articulate thoughts coherently, I left the museum in awe. I’d never seen anything like it. As a history nerd and a historical kitsch connoisseur, I knew I needed to work there. With the help of my adoptive grandma, I signed up to be a docent, and for the time I spent in Utah, I was a faithful volunteer for eight months.

Not Just Your Grandma’s Attic: A Closer Look at the Pioneer Memorial Museum 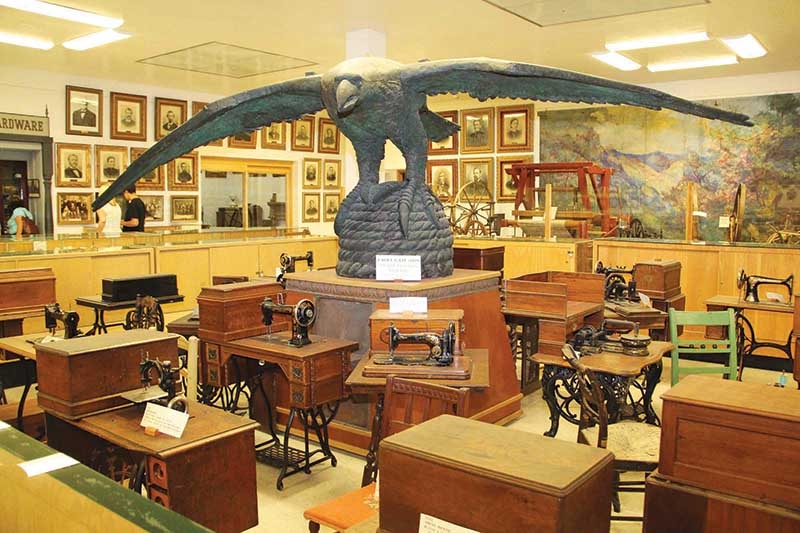 Underneath the wings of this eagle, a collection of sewing machines evinces the organizational scheme at the DUP Museum: similar objects differentiated by family ownership. Photo: DUP Photo Department

The first time I visited the Daughters of Utah Pioneers’ (DUP) Pioneer Memorial Museum (PMM), a cyst had taken up residence on my ovary and so walking was out of the question. My best friend’s grandma, our tour guide, asked for a wheelchair on my behalf, and when the docent presented it to us in the museum’s foyer, ushering her to get in, she proudly explained that it was for me, the sickly 22-year-old. Despite being heavily medicated and unable to articulate thoughts coherently, I left the museum in awe. I’d never seen anything like it. As a history nerd and a historical kitsch connoisseur, I knew I needed to work there. With the help of my adoptive grandma, I signed up to be a docent, and for the time I spent in Utah, I was a faithful volunteer for eight months.

Sometimes, I feel like a walking advertisement for this museum, as I discussed it with just about everyone I’d met in Salt Lake. No one seems to have visited it following an unremarkable school trip in fourth grade. Seriously, people, I promise that this museum is so much more than just the dusty, two-headed lamb in the basement. Let’s get a few misconceptions out of the way. “At the Pioneer Memorial Museum we celebrate all pioneers, including the indigenous peoples who inhabited this territory before 1847. We have artifacts representing a variety of people who were in Utah before 1869 [the year the Transcontinental railroad was completed]: African American, Jewish, Chinese, Catholic—even some Tibetan printing blocks!” says Kari Main, the museum’s Artifacts Office curator. The DUP is technically a non-denominational organization that welcomes any daughter (ladies only) who can trace a direct line to someone living in the Utah Territory prior to 1869—all of these peeps are welcome. There is a male counterpart organization: the Sons of Utah Pioneers. I’m still searching for my Daughters of Utah connection. Until I find it someday, I am stuck with the title of Associate Daughter.
Even within Mormonism, among its early leaders and followers, there was a rich diversity of ideas and a genuine culture-making effort nearly upon arrival in the Salt Lake Valley. Another thing to keep in mind is that the pioneer period coincided with the Victorian era. This was a profoundly weird time in the Western world—a time marked by an obsession with death. Death was a particularly salient theme for Utah settlers, as it was so much a part of their daily lives. At the museum, pioneer thrift and Victorian Americana intersect in the peculiar. Main mentions that most visitors find the PMM’s collection of hair art to be its most bizarre set of artifacts: “Victorian hair crafts were extremely popular, and we have an amazing collection of hair art,” she says. “Rather than finding it creepy, I am simply amazed at the dedication and precision of craftsmanship in these intricate (and delicate!) works of art.” She insists the spookiest relic is “a chair in the Toy Room on the second floor of the Carriage House. The seat of the chair was made from the family’s favorite cow, and they used the skin from around the cow’s face. You can see the eye holes in the chair seat. I’m not sure how anyone (particularly a child) could have found that chair inviting!” she says. Toy coffins, an infant’s skeleton and family pictures with dead relatives are also in the collection—if you can find them.
The museum consists of six floors in total, all jam-packed with the most mundane and exceptional relics, attesting to the multiplicity of the pioneer experience. Virtually nothing is in storage. Main explains, “The museum itself is an artifact, from the architecture meant to replicate the old Salt Lake Theatre to the placement of the artifacts in cases. The museum represents over 100 years of dedicated women working tirelessly to preserve the pioneer history in artifacts and documents.”
The floors are organized in no obvious chronological order or by any obvious logic, but that’s also the museum’s charm. Some cases are devoted to specific families, while others house collections of specific objects. “Can you imagine seeing an average toothbrush from 150 years ago?” Main says. “We are also unlike other museums because, in our conceptualization, the value we place on each artifact is ownership. For example, that one brass bucket in the case of 20 other similar brass buckets becomes important due to who originally owned it. This is noticeable to the visitor because we display practically every artifact we own, no matter how many other similar ones we have.” There are cases comprised solely of handmade lace, eyeglasses, tools and entire rooms of chairs and carriages. Having interned there for eight months, I can say with certainty that I saw something new every week.
The museum is nestled next to the State Capitol at 300 North and Main Street. This place, I might add, boasts an amazing gift shop stocked with 1960s Technicolor-fabulous postcards for sale at mid-century prices. It’s free, and is open year round Mon.–Sat. 9 a.m.–5 p.m., until 8 p.m. on Wednesday nights and, June through August, Sundays 1 p.m.–5 p.m. Main says, “I think most people would be amazed at the diversity of the collection we have on display—it sounds cliché, but there is truly something to interest everyone.”
You can find more information about the museum and the DUP organization by visiting its website, dupinternational.org.
Photos: