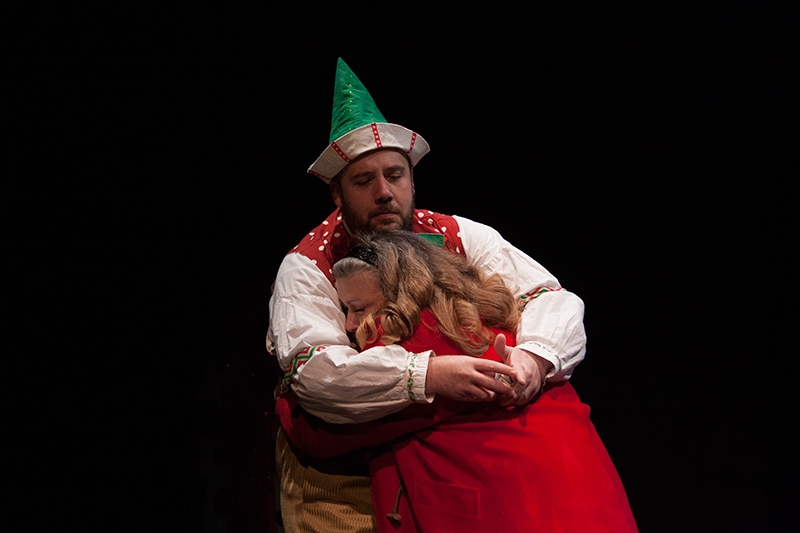 Kirt Bateman and Colleen Baum embrace as an elf and a seven-year-old girl. Phtoto: Plan B Theatre

Christmas is upon us, and amongst the seasonal wonder of cookies, presents and carols sits the ever-important Christmas with Misfits special. This takes place in many forms, including Blu-ray, scheduled television and the unfortunate Facebook videos of young adolescents singing “Let it Go.”

Nestled in the city, Salt Lake has a Christmas special of its own this season. At the Studio Theater within the Rose Wagner, the Plan-B Theatre Company will be presenting Christmas with Misfits, a wonderfully odd Christmas romp that brings a refreshing air into the stale Holiday routines that we can almost predict this time of year. If you’ve heard stories, you haven’t heard these stories. There’s a dialogue between a girl and an elf that sits humorously in the lap of honesty, a wonderfully awkward romantic interlude between gay geek friends, something that involves the likeness of the baby Jesus on a frightening scale and old people cheerfully embracing a relative-less Christmas day.

This all might sound off, and The Plan-B Theatre Company would happily agree with you. Having built a reputation for avoiding the run-of-the-mill banter that surrounds most traditional theatre, Plan-B Theatre Company offers unfiltered little truths that are sadly left out of most performed interpretations. To prepare yourself for the event I suggest clearing your mind of, “Oh, I know how this works out” or “This is the part where…” because those notions simply aren’t attended to for the four consecutive plays. Before the evening, I cleared my own expectations and from the play titles alone, knew there was a good chance I’d be laughing (That means I wore my comfy pants).

The first play of the night was called “The Little Girl and the Elf.” This play focuses on the reality that Christmas Elves are not really elves at all and a seven-year-old who comes face-to-face with that reality. Colleen Baum’s hilarious performance as the little girl is worth the price of admission alone. She, along with Kirt Bateman, chew up the stage in this coming-of-age story and create very funny moments of lost innocence.

Dealing with a different loss of innocence was the second play, “Him and Her on Christmas Eve.” This play sits us in the front seat of a car while two post-coital geeks watch a film on a cell phone and discuss, at great length, the state of the sex present they gave each other for Christmas (along with beaver key chains). Jeanette Punich plays the young woman and is almost unrecognizable in her portrayal of geek fornication. The dynamic between her and Bateman really comes of as old friends in their mannerisms and approach to one another. I almost forgot I was in a theatre as they drew me and the audience into their little world.

The third play, “The Baby Jesus Collection,” was centered around a prop displaying over 1,200 baby Jesus (I do believe they spelled Jesus differently) likenesses. This play was less of a story and more like a series of gags. One-liner after one-liner were cast by the actor and actresses and I hardly had time to compose myself and focus for its entire duration. This was an audience favorite and Bateman did an excellent job of playing the creepy salesman/Guinness-world-record-holder character.

Finally, we have “Christmas in Meadows Manor.” This play takes place in an old folk’s home and has a dry, steady humor that reminded me of a Coen Brothers film. The dialogue occurs between two elderly people as they discuss the drawbacks of having family visit on Christmas. As an old man, Bateman shakes during the performance so much, you can’t help but wonder how he gets through the humorous engagement. After the couple make a list of tragic examples involving former Christmases, they make their own decisions about how to spend their Christmas day and recognize Christmas the way they want to—with tequila.

The end of the show was met with a lot of applause and the actors came out and waved us goodbye. The more-than-courteous staff ushered everyone to the doors and folks were still laughing between themselves as they did. My fiancé beamed as she walked out the door and couldn’t stop talking about the performance the whole way home. The night felt wholesome and very Christmas-like for a show that was fairly unconventional. Perhaps there was relief in avoiding the same-old-story. Perhaps we’ve all become so unconventional ourselves that we were happy to find something that spoke to us for a change. Either way it was a wonderful evening and I highly recommend anyone to spend a part of their Christmas with Misfits.