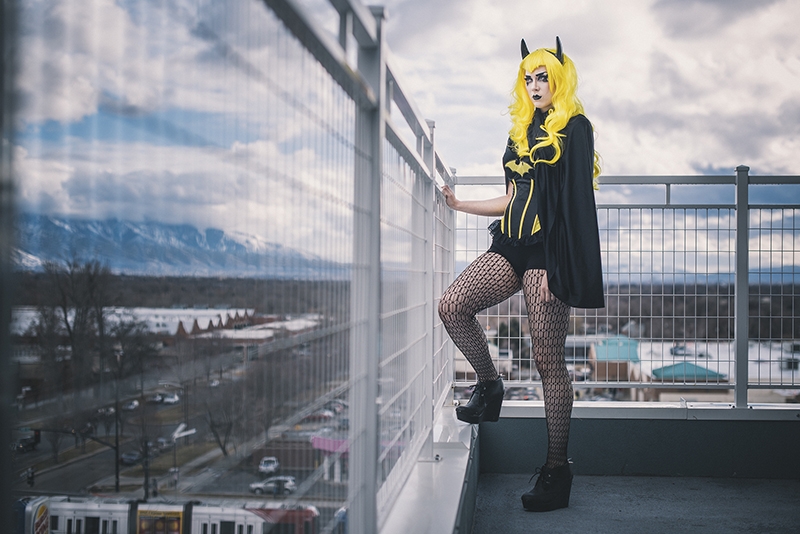 Salt Lake’s Bad Kids Collective, born from Club-Kid/Gaga fever dreams, Internet embellished lifestyles and queer performance attitudes, has galvanized Utah drag culture since its formation nearly two years ago. The Bad Kids, part autonomous happenings of human bodies, part multi-media selfie-installations, are cultivating a culture of drag performance in Salt Lake where diverse gender expression reigns, where talent refers not to exclusive abilities, but rather the courage to get onstage and perform one’s artistic vision to completion. Rather than focusing on feminine expression, the Bad Kids use performance as an artistic tool to widen the conversation between our queer communities to include all of us, too often divided by cliques of gender and sexuality. For them, every day is a drag, every body a context to apply with costume, cosmetics and ontological anarchism.

SLUG’s bi-monthly online column, Creature Feature, has followed the Bad Kids from their raw, youthful days to the brilliant, thriving queer constellation it continues to be. They are a vital force for queer voices in the face of today’s hesitancy toward all things goofy and sexy and weird and fun. Past interviews have included the scene makers Cartel Chameleon Fenice and Klaus von Austerlitz, Gender Integrated Performance Artist (now-SF resident) Willard, femme-male fatale Sophia Scott and camp queen Mae Daye. You can find these interviews, as well as photo galleries and show reviews online at slugmag.com/columns/creature-feature. For its sixth installment, SLUG spoke with Jezebel Jet about becoming her comic book alter ego and being the Bad Kids’ first female performer.
Jezebel first encountered the Bad Kids last year, after having been a regular club kid at Metro Bar, Bad Kids HQ. “I would go out every Thursday and every Tuesday,” says Jezebel. “I would always look forward to the drag shows.” Cartel and Klaus (Creature Features No. 1 and 4) recognized potential in her tall, bubbly, wig-wearing personality. “Cartel approached me about performing initially,” Jezebel says. “It was my birthday celebration at Metro, and I was all dressed up. She came up to me out of drag, as Scotty, and said, ‘Hey, I thought you were Klaus.’” They ended up hanging out all night, becoming fast friends. “Cartel asked if I wanted to perform with them,” Jezebel says. “I was really excited about it because going to shows was one of my favorite things about going to Metro anyway.”
Jezebel expresses that in her younger years, she wasn’t one to stick to things. “In high school, I did theater makeup, so I was always backstage, but I never had any hobbies or extracurriculars. [Performing] gave me a chance to break out of my shell just a little bit,” she says. Jezebel’s first performance was with Cartel and Klaus at the Sorority Cemetery Show last March, where, coincidentally, Creature Feature No. 5—Mae Daye—also made her Bad Kids/Metro debut. The performance: Jezebel, in a black gown and a Coca-Cola red wig, alongside Cartel, seduces Klaus’ frat-bro character, knocking him out and rubbing fake blood into his exposed body. The song: “Tear You Apart” by She Wants Revenge. It was her first performance, the Bad Kids’ first from a biological female.
“You put so much into this visual glamour,” Cartel told Jezebel during the pre-show pow-wow. “I was like ‘I want you in a show.’ One of our goals from Day One was to not have it be a drag show, to have biological males and females and kings and queens—basically whatever identity—if somebody has a vision and wants to be onstage, we want them to be onstage,” says Cartel.
For all its focus on femininity and untethered gender expression, many of cis, trans and FAAB (Female Assigned at Birth) girls feel that drag is still a boy’s game. In the wake of this initial nudge, a number of “femme queens” (cis/FAAB women)—most notably Arousalind and Chartreuse—joined the performance ranks. “I didn’t know that what Cartel was building with the Bad Kids would allow me to perform, being a biological female,” Jezebel says. That label, as with the collective, isn’t prescriptive or exclusive—“I think it’s pretty cool that we’re welcoming to anyone who wants to perform, because it’s not just drag,” Jezebel says. “It’s performance art.”