“People who are too comfortable freak me out. I feel so uncomfortable and indecisive all the time, so I’m always questioning myself,” says The Bearded Femme. 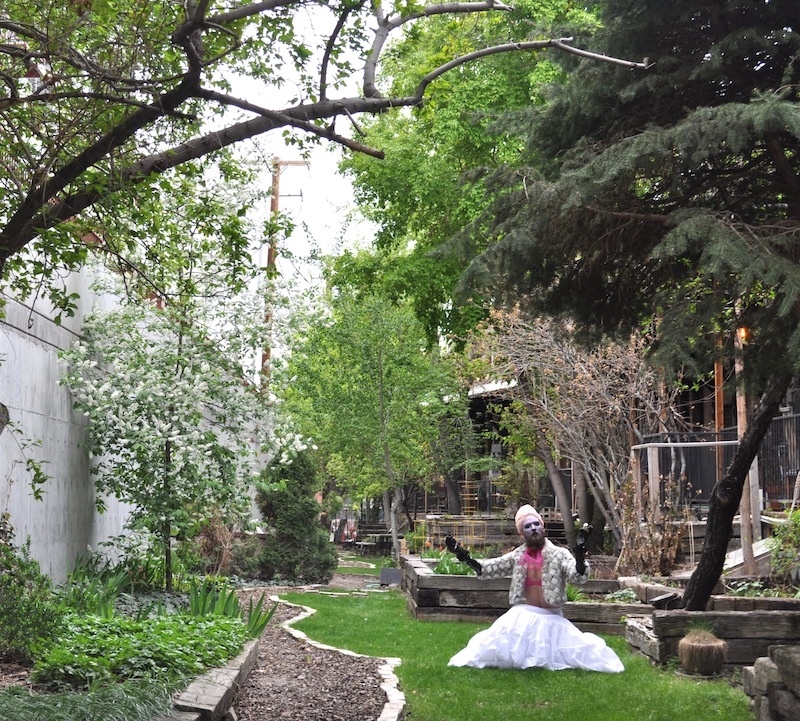 The Bearded Femme at play in the world of gender performance. Photo: Robin Sessions

Since it’s formation nearly two years ago, Salt Lake’s Bad Kids Collective, born from Club-Kid/Gaga fever dreams, Internet embellished lifestyles and queer performance attitudes, has galvanized Utah drag culture. The Bad Kids, part autonomous happenings of human bodies, part multi-media selfie-installations, are cultivating a culture of drag performance in Salt Lake where diverse gender expression reigns, where talent refers not to exclusive abilities, but rather the courage to get onstage and perform one’s artistic vision to completion. Rather than focusing on feminine expression, the Bad Kids use performance as an artistic tool to widen the conversation between our queer communities to include all of us, too often divided by cliques of gender and sexuality. For them, every day is a drag, every body a context to apply with costume, cosmetics and ontological anarchism.

Even though The Bearded Femme can be campy, or even terrifying at times, it isn’t a sideshow character or an alter-ego persona. “The Bearded Femme isn’t just a performance persona, it’s an identity,” says Bull, in which he can explore the myths of masculinity and femininity and the sorrow that can come about when these myths codify into gender conventions. “It’s a projection of what I already am,” he says, “in a beautiful, grotesque or silly way. It’s about playing with identity and with who you are. Now that we have the Internet, you can do that even more.”

Though some pleasure may remain in the myth of gender, it can only be achieved through play, explains The Bearded Femme. “I’m looking to a future where we all play with identity instead of being locked down by a myth,” he says. Believing too strictly in gender stereotypes makes people too comfortable, and thus sets them up for failure or boredom. “People who are too comfortable freak me out. I feel so uncomfortable and indecisive all the time, so I’m always questioning myself,” he says.

“I feel queer in a sense that I’m very sensitive and vulnerable,” he says, “but vulnerable is powerful and beautiful. A lot of people get off on having power over someone, and if we got over that fucking mindset, we would be OK with everyone having their own niche. That’s what I want, a society where everyone has their own niches and we’re all equally respected, we’re all able to explore those niches without stepping on people’s toes.”

A risk in being a performer these days is being pigeonholed into one aesthetic or style. “I want to perform based on how I’m feeling in the moment,” he says. Drag, contentious as the term has become in the gender performance world, still retains some excitement, The Bearded Femme explains. “Drag has endless potential,” he says. “If you really open up its definition as playing with gender and pop culture, using it as an amazing clusterfuck in a single performance, via costume, body language, musical choice—it’s a medium where you can use all elements. I can put on this character, have a beard, wear some weird-ass make up, be wearing women’s clothing and people will be like, ‘What was this about?’”

Regarding whether or not he’d like his emotions to be explained is complex, though: “If I’m going to follow a mode or a thought of inclusivity, and if I want to actually change things here, then I do think it is important to have dialogue,” he says. If something interests you or pisses you off about a Bearded Femme performance, Bull wants to encourage you to ask him about it. “If I could write an essay about every performance and people would actually read it, then I would. Every single performance I’ve done has a story or a theme to it—I can’t get onstage unless there’s a meaning to it.” He also acknowledges that whenever he performs to an audience, people want him to be entertaining. What results is a compromise—“It’s a fine line between ‘Fuck you’ punk and ‘Let me hug you, let’s do this together,’” he says.

The Bearded Femme’s vision for utopia extends from his stage performance to the queer community at large: “I want us to fully embrace our colorful, powerful parts, and put them at the forefront and use that to change society instead of assimilating to the pretty, white-picket home lifestyle,” he says. Beyond his vision for a queer utopia, he also wants to challenge his audience to question their own comfort level, to see past their privileges and affect their social environments. “We have so much potential, as queer people who’ve been oppressed, to push society forward—we have to do it all together,” he says.

“That’s all a part of why I’m doing this,” he says. “I admire performance artists who are completely themselves, completely their own voice, no compromise. That’s how the world changes, because of artists like that—who don’t compromise their vision, as lonely as that may be.”

SLUG’s online column, Creature Feature, has followed the Bad Kids from their beginning to the brilliant, thriving queer constellation it continues to be. Find everything Creature Feature—interviews, photo galleries and performance reviews—online at www.slugmag.com/columns/creature-feature.

Members of The Bad Kids Collective will participate in SLUG’s second annual SLUG Cat, which features Metro Bar as one of its stops. The Collective’s second annual pageant, Ghouls and Dolls, featuring acts from both emerging and established performers, takes place on June 5, headlining Metro Bar’s 2014 Utah Pride Festival festivities.