With the amount of bling already bedazzled to his body, it’s no wonder that Tony received the crown. “To win the pageant was shocking,” Tony says. “The pleasure of the whole pageant is that you get to meet so many other creative minds that are the same level as you, as far as being artistic in their different ways, which is fun.” 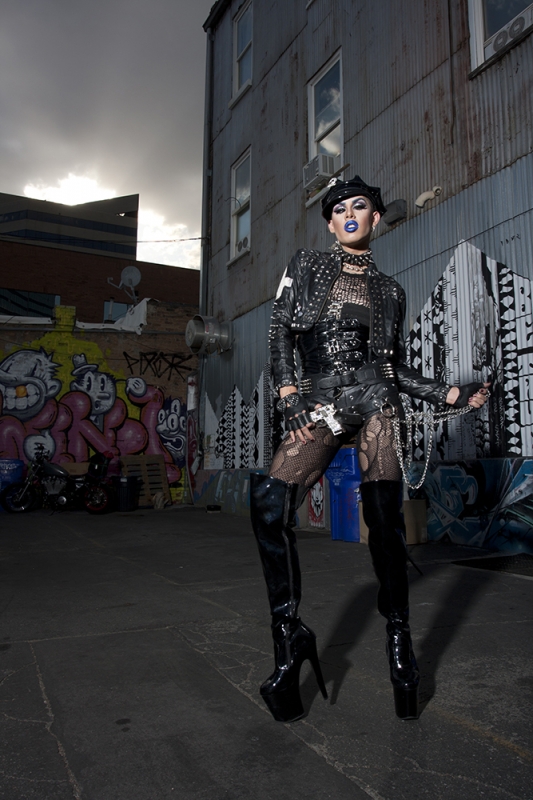 Salt Lake’s Bad Kids Collective, born from Club-Kid/Gaga fever dreams, Internet embellished lifestyles and queer performance attitudes, has galvanized Utah drag culture in recent years. The Bad Kids, part autonomous happenings of human bodies, part multi-media selfie-installations, are cultivating a culture of drag performance in Salt Lake where diverse gender expression reigns, where talent refers not to exclusive abilities, but rather the courage to get onstage and perform one’s artistic vision to completion. Rather than focusing on feminine expression, the Bad Kids use performance as an artistic tool to widen the conversation between our queer communities to include all of us, too often divided by cliques of gender and sexuality. For them, every day is a drag, every body a context to apply with costume, cosmetics and ontological anarchism.

At the Bad Kids’ Pageant held at Metro Bar earlier this summer, there was one contestant who captivated the audience more than anyone else. Shrouded in a black cape until his performance, Tony delivered more than just “drag.” He performed what amounted to a truncated mythology, with an Aztec-Egyptian-Hindu influence. When Tony took the stage, the cape flew off to reveal an ornate costume of gold jewelry, carefully covering Tony’s torso, arms and head.

Tony’s creative performances over the past year, and brilliant costuming at the pageant, earned him the appreciation of the evening’s judges, who crowned him the overall champion, with the title of “Baddest Kid of All.” With the amount of bling already bedazzled to his body, it’s no wonder that Tony received the crown. “To win the pageant was shocking,” Tony says. “The pleasure of the whole pageant is that you get to meet so many other creative minds that are the same level as you, as far as being artistic in their different ways, which is fun.”

Tony’s approach to gender performance has always been playful. “I definitely feel like drag is a medium for different expressions, especially feelings,” he says. Tony’s upbringing led him to delve into the alternative “scene” subculture and punk and goth aesthetics, where he became enamored with spikes, studs and tattoos, including ones that his supportive mom, a tattoo artist, gave him. Through the scene, he also embraced an androgynous attitude toward gender. “I would identify as genderqueer for sure,” he says. “I love playing with gender and the shock value that it gives me.”

The first time I had seen Tony in costume was at a Halloween celebration at Metro, where he was dressed as a purrrfect recreation of Michelle Pfieffer’s Catwoman. “It’s very iconic for a lot of people,” he says. “It seems to be the night where everyone’s like, ‘You were Catwoman!’” What’s especially impressive about the costume is that Tony made it himself. “I had ordered an actual rubber-latex suit, ‘cause that’s what they use in [Batman Returns], but it didn’t come in time. Halloween is very, very dear to me. I love Halloween—it’s one of my favorite holidays.” Left without a costume and not wanting to “half-ass” Halloween, as he puts it, Tony made it himself. It could’ve been the same one used in the film, for all I know. “You feel more connected when you work really hard on something and it pulls off,” he says. Tony also likes to keep his looks varied. He also does a spot on Brooke Candy performance, too. “I like to keep people on their toes,” he says. “For me, drag is about dressing up and having fun.”  ;

Tony’s costume talents aren’t limited to making outfits for himself—while a regular at Area 51, he made a wedding dress from scratch for SLC gothfather DJ Evil K’s bride, Mary Lou. “They ordered one online, and it was nothing like the picture at all,” he says. “It was completely all wrong, and they were completely devastated.” Tony created the dress in two days and surprised the couple with it, to their delight. “I was working at McGrew Studios—I made the dress. It was huge, massive, really gothic and super pretty.” The couple offered him the role of Maid of Honor, which Tony accepted by attending in drag. The wedding took place at Area 51, of course. “They’re fabulous people,” Tony says.

Tony caught the attention of the Bad Kids Collective as a “Club Kid” personality at Metro Bar, where the Bad Kids have performed regularly for the past two years. The group has swelled and diversified, but Tony appreciates the variety. “We each, in our own way, step out,” he says. Sharing such unique personalities and talents allows the individuals of the group to grow as well. “You learn from other people, too,” Tony says. “They’ve helped me find parts of myself that I was having trouble with.”

With his new title, Baddest Kid of All, “It’s exciting that now I have the power to somewhat try and help my fellow gay community, and hopefully, I can inspire other people to realize that they can do whatever they want—dress up crazy or whatever other artistic things that they have.” If you still haven’t checked out the amazing subculture that the Bad Kids have built in Salt Lake, head on over to Metro Bar sometime. Tony will likely be there, slinging shots and serving wicked looks.