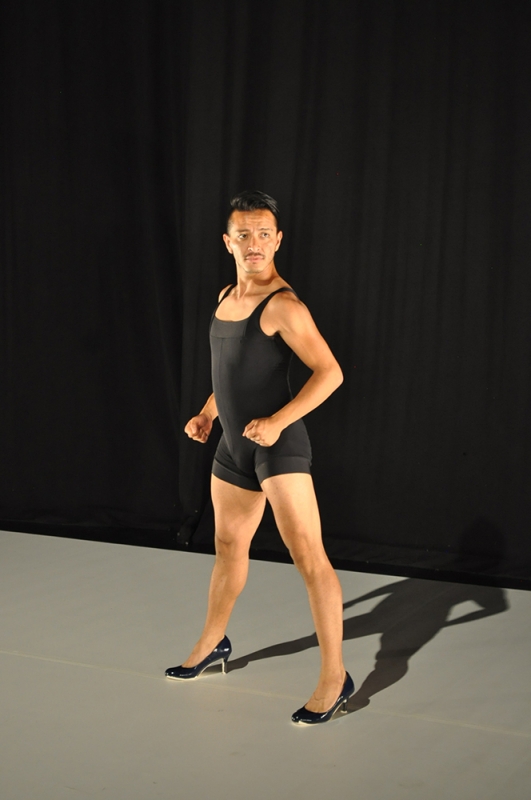 Efren Corado Garcia performed his own choreography in “My Little Man. By my side, eyes fixed on me, he moved.” Photo: Michael Watkiss

What defines avant-garde? Is its purpose to create a closed dialogue among artists in a particular medium and/or challenge audiences to consider new perspectives? Must something avant-garde make an audience uncomfortable, or can it also be poignant and very personal? Who decides what is and what is not cutting edge? Is it the critic, the audience, the creator, the performer, the individual who curates a performance series, or any combination of the above? These are questions I have pondered while considering how to comment on the Daughters of Mudson concert presented at The Rose Wagner Studio Theatre this past weekend.

Daughters is the culminating performance hosted by Ashley Anderson Dances to encourage both emerging and established choreographers to produce work in Salt Lake City. Her umbrella organization, loveDANCEmore, hosts the Mudson works-in-progress series at the Masonic Temple throughout the year. It is free to the public, and provides an informal platform for dancers to present sketches of their work. Modeled after New York City’s Movement Research at the Judson Church, Mudson takes its place among similar series that have emerged in metropolitan areas as vehicles through which notable, ostensibly avant-garde choreographers have emerged. These five pieces were selected by New York–based choreographer and loveDANCEmore board President Ishmael Houston-Jones for this curation.

Of the five pieces on the program “My Little Man. By my side, eyes fixed on me, he moved.” created and performed by RDT dancer Efren Corado Garcia was the most potent and successful. Garcia, wearing black pumps and a short unitard, drew me in through dynamic movement, detailed design and poignant expression. He danced with grace and purpose, evoking a memory of an important encounter with a loved one or admirer. Garcia’s quiet, emotional vulnerability reminded me that effectively weaving personal experience into well-crafted art can powerfully engage an audience.

“Dear Son,” by Erica Womack, was an intimate duet between two women who seemed to explore the loss of a child and the resulting space their absence creates. Like “My Little Man,” Womack’s piece also effectively mined personal experience as a template for choreographic exploration. Though I wished Womack had more effectively used space to reveal the choreography, the detailed gestural vocabulary and relationship between dancers was effective.

Brooklyn Draper’s piece “The Beatles or the Stones?” while also seeming to pull from personal memory, was not as engaging. Though the dancers performed the material well and Draper designed interesting vocabulary, overall, I was left grasping for the point. The dialogue, meandering movement progression from random interaction to argument, to a rolling slap fight, failed to effectively connect ideas.

Ching-I Chang used iconic references to pop artist Andy Warhol in her piece “This is the Beginning of Boredom.” While her program notes indicate it was inspired by Warhol, I could not see the relationship. Warhol used American artifacts, from food items to movie stars, as subjects for his work. His prints blended graphic art and advertising to create an avant-garde aesthetic and parody of American culture. Chang relied on Warhol wigs and Campbell’s soup to make a connection. The stilted model, like posturing of the dancers, random dialogue, audience involvement, and finger painting with tomato soup, did not communicate clearly. It was not funny, it was not a parody—it was not “avant-garde,” and was unfortunately, in spite of talented performers, too long.

The final piece of the evening was “with(out)Sam” by Michael Watkiss. Though Watkiss is a gifted performer who has lent his talents to his work with Movement Forum, I again found myself wondering about his purpose. Watkiss’ piece consisted of repetitive improvisation and haphazard discussions with Sam Hanson about aspects of his dance background. Hanson, who stage-managed the evening, interjected commands and questions from an off-stage mic. Then we watched as Watkiss undressed to his dance belt and cavorted onstage. As with the pieces before, we were served many disparate elements with neither a clear connection nor direction. The result seemed to be an inside dialogue about the vagaries of becoming a man in dance, and an opportunity for exhibitionism.

While I did not leave Daughters inspired with new perspectives about dance, nor the feeling that I had witnessed the avant-garde in the Salt Lake dance scene, I still applaud Anderson and her supporters for creating this opportunity for emerging artists to explore their ideas. Daughters continues to be an important method to develop broader dance audiences and continue the discussion among artists about art. I hope that as the Mudson project continues, more varied work will be chosen for the final performance.