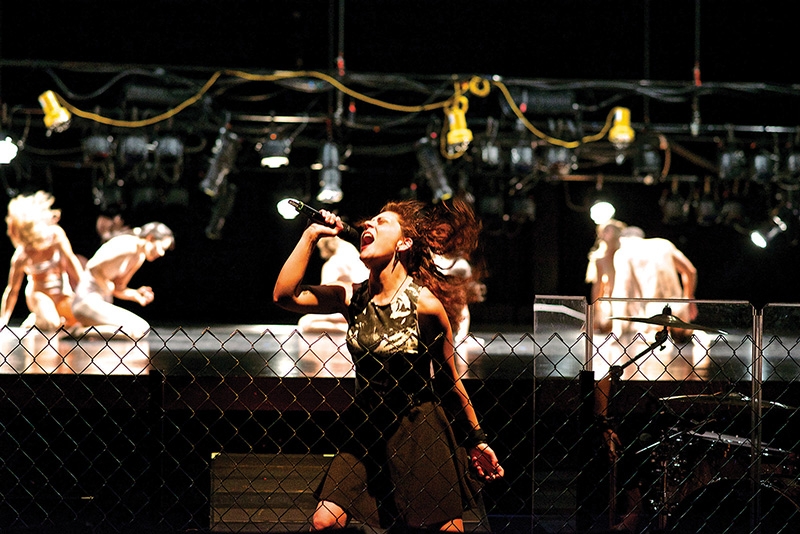 Of Meat and Marrow: a Sexy, Spooky Thriller

Looking for something to do on Halloween that will offer you more than playing dress-up and dancing to “The Monster Mash”? SB Dance has something for you. Of Meat and Marrow will be performed at the Rose Wagner Theatre on October 25–27. A “rock-opera-dance-circus” for a mature audience, the show is equal parts sexy and silly, with horrifying monstrosity. “It’s a reminder that kids are not the only ones who can trick or treat,” says Liberty Valentine, a performer in this year’s show.

Though SB Dance is the smallest resident organization of the Rose Wagner Performing Arts Center, Stephen Brown, director of SB Dance, did not let the challenges of funding or marketing stop him from his grandiose vision. Starting with a concept of an alternative Halloween performance, he started piecing together threads from pre-existing ideas, with the desire to include live rock n’ roll music with the performance. Valentine suggested a collaboration with local band Totem & Taboo, who were thrilled to join forces in the creation of a theatrical modern dance performance with a “mish-mosh of awesome,” as it was sold to singer Vanessa Angulo. This produced a unique blend of forces as the band was given equal footing onstage to the dancers, rather than having a performance with recorded songs or with the players hidden from the audience. “It’s an idea, ultimately, that had to do with what we wanted to get across. We wanted the power of the music, and you can’t really get that power—or I don’t really want it, when I’m 80 feet from the band. I want to be like, 20 feet from them, because I wanted it to have that forceful musical experience,” says Brown.

Although the idea was specifically based around a Halloween show, the team put the vision to the test with an experimental performance in June. This combination of the band with the dance performance created a vibrant energy shared between the audience and the performers, which left all those who attended fully charged. “What was interesting was that we knew that it was going to be collaborative, but I don’t think any of us realized just how integrated it would be. It focused around [Angulo] as a member of the band, but with us actually between the audience and the dancers, everybody was extremely visible, and it was a very integrative performance,” says guitarist (and SLUG writer) Brian Kubarycz. While the rehearsals leading up to the test performance pushed everyone to the edge, the artists came together to dedicate their efforts to a solid performance. “That’s the thing about collaboration … [Totem & Taboo] collaborate as a band together, and [SB Dance] collaborate as dancers and choreographers, and when you put the two elements together, it becomes a deeper collaboration, and that’s the fuel that you feel,” says Valentine. The performance this October will be relatively similar to the performance in June, but the team has done some serious fine-tuning that will add new dimensions to the Halloween show. In addition to the finessing, Brown says, “The final element of what we do is having an audience there. What we’ll see in October is that when a different audience shows up, the whole show will change. This is why we do it live—otherwise, we could just do it on video. But this is what really makes, to me, the guts of crazy human expression.” While the energy was high during the test performance in June, with the show near Halloween, the team predicts that the energy will be upped quite a few notches. “There is an element of danger all over this thing, which is intriguing and fun and thrilling and scary,” says Angulo.
Aside from avoiding a narrow genre in the type of the performance itself, the story in Of Meat and Marrow breaks the boundaries of sticking with safe themes, undertaking the more horrifying aspects of human existence. By including taboo subjects, the performers approach major life themes and emotions with extreme vulnerability, juxtaposed with a feral ferocity. According to Kubarycz, “The trajectory of the show that we want to bring is this wild animal onstage that we make roar right in your face, but we need to do it in a way where you’re not just going to run away. But you can still have that experience. We haven’t entirely tamed the beast. That’s the nature of monsters. They’re really cool, and you don’t know what the fuck it is.” Of this storyline which ebbs and flows with humor and horror, Brown says, “[The story] starts out odd and funny, and you see all of these relationships, but then, all of a sudden, our Halloween show gets fucking real. And it leads to some intensity.”
You can find out more about the show at sbdance.com, which includes pictures from the performance in June. Tickets can be purchased through ArtTix at arttix.org or by calling 801-355-ARTS. After the performance, the audience is invited to stick around for the AfterLife AfterParty backstage with drinks and dancing (tickets sold separately). This is one Halloween event you definitely do not want to miss.