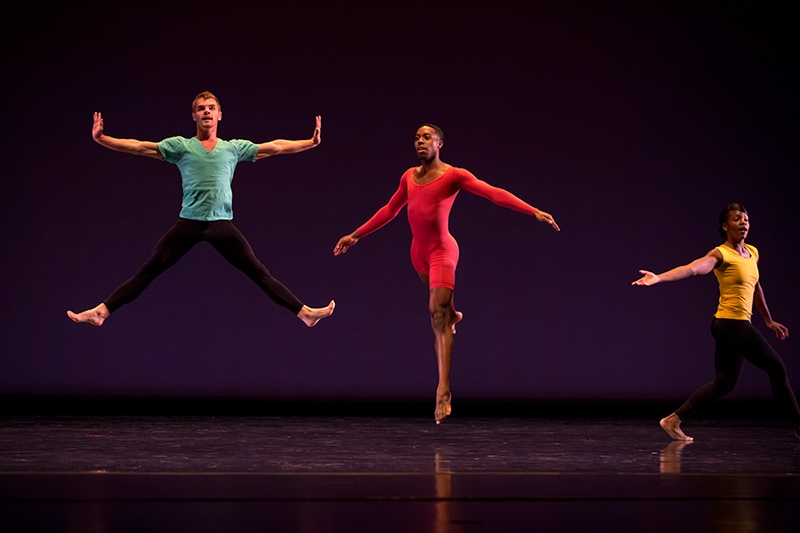 Repertory Dance Theater: From Radical Beginnings To A 50-Year Reunion

The Repertory Dance Theatre (RDT) is at a threshold. It has been close to 50 years since a group of Salt Lake City dancers secured a Rockefeller grant and founded “the nation’s first successful modern dance repertory company.” To kick off their 50th anniversary celebration, RDT held a three-night performance of REUNION, which featured pieces that varied from world premieres to decades-old works, all choreographed by RDT alumni (many of whom were enthusiastic audience members).
When Linda Smith, the executive and artistic director of Repertory Dance Theatre (as well as a founding member), introduced the company’s REUNION performance, she emphasized RDT’s continued relevance and the radicalness of its history. Smith went on to laud the energy throughout Salt Lake’s artistic community, with its “creative renaissance” of sorts, its convergence of multiple art forms, and RDT, which she stressed is just as revolutionary today as it was 50 years ago.
REUNION began with a traditional piece to set the tone for the rest of the evening. “For Betty,” choreographed by Williams Evans, took us back to 1970. The work had three parts, much like a concerto, and saw dancers carving gracefully through space to bring it to life with bright, sweeping movements. The second piece of REUNION was the world premiere of “Schubert Impromptu,” choreographed by Francisco Gella. Jaclyn Brown and Justin Bass danced together beautifully, traversing the frenzied and controlled, the gentle and forceful. Their movements were an intriguing exchange, and they moved from supporting to constraining one another. A sense of defeat, as well as yearning, pervaded amid several gorgeous holds and moments of entanglement.
In Brent Schneider’s “Alone,” dancer Tyler Orcutt was exposed under a moving spotlight as other dancers, dressed entirely in black, silently watched him. Orcutt moved athletically and acrobatically, balancing precariously at times and leaping through others. “Alone” was a haunting story of isolation, with Orcutt caught amid meditation, revelry and futility. At times, the piece also read as a muted glorification of the human body and its physical ability to be vulnerable and to strive.
Two charming and tongue-in-cheek pieces were “Styrofoam Olympics” (2008) and “Snack Pack” (1972). In “Styrofoam Olympics,” the choreographer, Lynne Wimmer, examined a curious exercise she discovered while recovering from knee meniscus surgery: The patient balances on one leg, picks up a set of Styrofoam cups and puts the cups back down. The resulting choreography was playful and humorous. The RDT dance company, dressed in athletic uniforms, took the repetition of the exercise and made it self-aware by stacking and exchanging Styrofoam cups with one another, turning a simple drill into acrobatic spectacles. The piece also left room for mistakes: At one point, a dancer overthrew a volleyball, which landed into the audience. An audience member then threw it back onstage, to much laugher and applause. In “Snack Pack,” choreographed by Linda C. Smith, the RDT company donned colorful, ’70s dance aerobic outfits and warmed up to an audio recording of “Good Housekeeping” exercises. As instructions were given for each exercise, the dancers listened—sort of. The exercise became silly banter, and the performance also went to show the countless interpretations of the exercises’ instructions (as well as the exercises’ ridiculousness in the first place), not to mention that the dancers were throwing around and tackling giant plush sculptures of food items throughout—a slice of pie, a slice of pizza, an ice cream cone and a fried egg.
The final performance of REUNION, choreographed by Angie Banchero-Kelleher, was “Material Tokens of the Freedom of Thought” (2014). This work was perhaps the most daring and cerebral of the night. Banchero-Kelleher described the piece as an effort to come to terms with her mothers’ passing as well as their relationship, which was tangled and often difficult, but loving. Aside from a few gorgeous lifts and paired movements, the piece didn’t immediately reflect Banchero-Kelleher’s relationship with her mother, but it did very powerfully visualize the multifaceted abstraction of thought. The dancers were at times still and at other times tumultuous, and their movements would progress, clash and push and pull at one another. At times, the synchronizations became discordant, then graceful again. Throughout, there remained a profound sense of the movements’ connections to one another, and even exhilaration in the dancers’ motions.
At the beginning of the night, Smith stressed RDT’s its boldness and relevance. REUNION was varied and engaging, but the art wasn’t challenging or unexpected, or even thrilling. The performances catered well to the audience members, who seemed to share a more traditional palate, but at times (and given that many of the pieces premiered decades ago), REUNION bordered on the outdated. Boundaries weren’t pushed, whether in the music or the choreography or the concepts. I wanted to see the company’s radicalness as it translated from 1966 to 2015. However, although RDT’s REUNION performance wasn’t necessarily as cutting-edge as I’d hoped for the night, the company does exist fantastically—and necessarily—as a living museum for modern dance, with dancers that actively preserve and celebrate its legacy.
Photos: