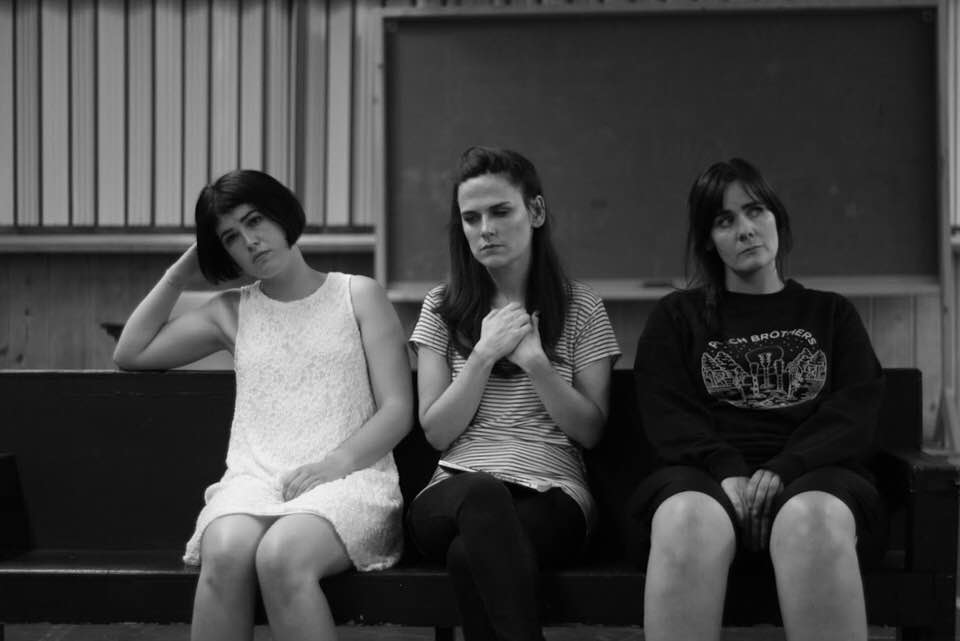 Mopey Wrecks (A Performative Analysis of Sibling Interdependency and the Increasing Unlikelihood of Returning to Moscow) is an intricate weaving of feelings between characters who can’t help but both bring each other up and tear another down. It’s a retelling of Three Sisters, a 1901 Chekhov play. Writer and director Whit Hertford’s adaptation of it is delightful and bizarre—though set in modern New York City and with a rewritten fourth act, the sibling dynamic of Three Sisters is still the core holding it together.

The youngest sister, Irina Prozorov (McKenzie Steele-Foster), is celebrating her birthday with her sisters in their late father’s house. It’s theirs now, along with their brother (Andre Prozorov, played by Aaron Kramer). Their father’s ashes sit in an urn below a golden record hung on the wall, a token of hope and achievement that will loom over the characters as they pass through the house over several years. It’s a transient space, the place where the sisters and their father’s former bandmates can crash between gigs and muse about the direction of their life, often in subtext. I didn’t expect to come away from Mopey Wrecks with such an impression of each character. It’s not that they necessarily always feel like real people; it’s much more that everyone’s particular flavor of nervous energy is always present. Everyone plays off one another until the energy erupts.

The sisters love each other but often act like they don’t know what love is, each of them experiencing it in a different way. The oldest, Olga (Ellesse Hargreaves), is a teacher who has love and gives it, but still pines for a romance, despite it all, having never been proposed to and now beginning to grow old. The middle sister, Masha (Nicki Nixon), is brooding and withholding, and even though she’s often showing more affection for Irina, Masha loves both sisters infinitely more than her overly thoughtful husband, Fred Kulygin (Roger Dunbar), whose fake mustache and weak platitudes make him look like a dork. Kulygin was once Masha’s therapist, but several years and a marriage later what once felt like wisdom now feels like feckless musing. Masha is attracted to Alex “Pussywhip” Vershinin (Jesse Ryan Harward), but it’s clear from the moment he walks in that Olga wants him, too. Irina gets no small amount of attention from the house, and her youth and beauty make the world seem full of possibility. The whole first act is defined by her brightness, a real naïveté that life will be fulfilling in all the ways she’s been promised. As characters file in to either celebrate Irina or just to party, the quirks become their full characters. What ends Act One—the brother, Andre, proposes to the awkward and anxious Natasha Ivanovna (Brighton Hertford)—becomes a wedge in the entire house’s ability to function as Natasha begins to cheat and becomes domineering and protective of her (likely illegitimate!) children. Her insistence that everyone keep it down so the baby can sleep, that the sisters switch rooms, that the elderly Anfisa (Anne Cullimore Decker) either pull her weight or leave—her neurotics in Act One explode into a fully motivated character whose voice becomes completely grating.

The 11 characters each have enough room to breathe that, by the end of the play, I felt like I had shared a moment with each of them. Mopey Wrecks survives on each actor’s ability to flow into the scene and then leave at precisely the appropriate moment, leaving a play that feels deft, its actors lulling me into rapt attention until I, too, was aware of the dwindling hope they feel.