00:00 / 15:25
Spotify Stitcher
RSS Feed
Share
Link
Embed
The performances in the play were solid, but considering the emotional content of the film, it would be hard to be anything less. The story is so strong that it carries the actors through it. A half hour into the performance I was completely zoned in. 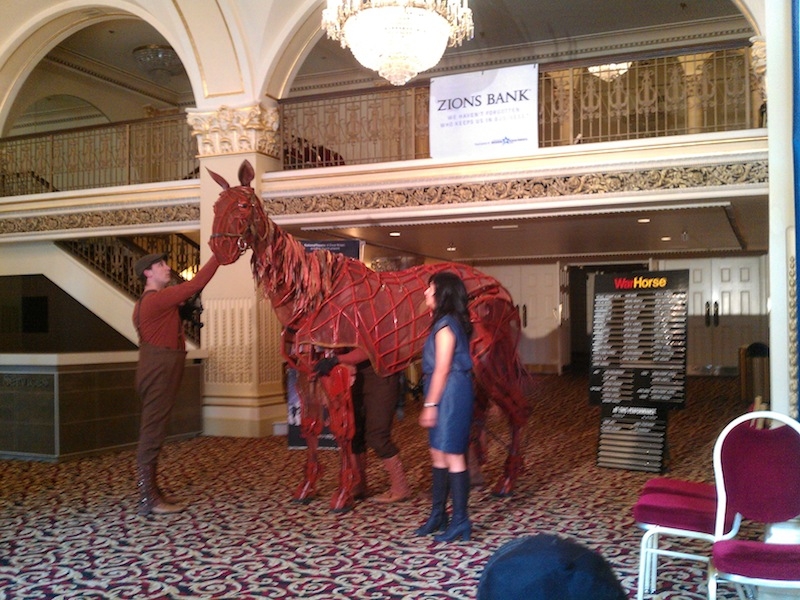 The Broadway show War Horse is adapted from the 1982 novel of the same name, written by Michael Morpurgo. You might also remember Stephen Spielberg’s 2011 cinematic interpretation—if you stayed awake for the two-and-half hour film from a horse’s perspective. I had only seen the movie prior to attending the event, but my son Samuel had read the book and he elaborately explained to me, “It’s good,” so I had high hopes for this off-Broadway performance.Now, you can’t call this a play because there’s a bit of acting and you can’t call it a musical because there’s just a bit of singing. Throw in a few 120 lb puppets and you have what the press event termed a unique spectacle. If you’re unfamiliar with the story of War Horse, it’s essentially about a horse (duhn duhn duhnnn!) and a boy during the early 1900s in England. As a foal, the horse was bought at an auction by a farmer who spent his mortgage money to beat his brother in a bidding war. The farmer leaves it to his son Albert (the boy) to raise the horse. Albert raises the horse, who he names Joey, and develops a very close bond with the impressive beast. The father gets drunk one night and bets his brother that the horse will learn to plow in a week. If he wins the bet, they will have the money for the mortgage and if he loses, the brother will acquire the horse.

Being that this horse is a hunter, and not a farm horse, the task was considerable. However, Albert manages to get the horse to plow in a last minute performance on the final day of the bet. World War 1 breaks out and the father goes behind Albert’s back to sell the horse to the Calvary. The horse goes to war for the Allied forces and eventually gets captured by the Germans—only to pull their artillery (the plow skills come in handy). During this three-year period, Albert becomes old enough to join the military and runs away from his home to do so. There are explosions and lots of deaths, but by the end of the war, Albert finds the horse and rides his lost friend all the way home.

As I mentioned earlier, their story is unique in that it is told from the horse’s perspective. This is the same for the Broadway show produced by the National Theatre of Great Britain. The horse is a giant puppet manned by three puppeteers. The horse, Joey, moves and acts so much like a real horse that if you let your eyes un-focus you could not tell the difference. The ears move and respond, indicating the horse’s emotion. The horse’s body moves up and down so it actually appears like it’s breathing. The Hand Spring Puppet Company, out of South Africa, is big on breathing. They want their puppets to be as life-like as possible and they believe breathing is an essential part of that. There are two puppeteers inside the horse and one that stands on the outside controlling the head. These puppeteers spent weeks around real horses learning all of their moves and mannerisms. They watched videos, researched studies and emerged masters of all things horse. During the press event they actually brought the puppet out to meet a real horse—it was so odd and incredible to see how similar they were.

The performances in the play were solid, but considering the emotional content of the film, it would be hard to be anything less. The story is so strong that it carries the actors through it. A half hour into the performance I was completely zoned in. The back drop was a simple torn cloth that various sketch-animated settings were projected across. The only set props I noticed throughout the show were a door, a plow and an artillery cannon. The simple set design was perfect, I thought, and my imagination had no problem filling in the holes.

The one standout performance I really enjoyed that evening was Captain Friedrich Muller, played by Andrew May. May showed a brilliant amount of range during the show and, with everyone’s acting so emotionally charged, it was nice to laugh and enjoy the antics of such a versatile character. Another wonderful performance was achieved by Utah’s own Maria Elena Ramirez. You might remember Ramirez from Law & Order, Army Wives and The Sopranos. She played the role of Albert’s mom, Rose. Her authentic performance had me saying all night, “I know I’ve seen her somewhere before.”

The explosions and battle scenes were so enjoyable I felt I was on a ride at Epcot. The sharply dressed crowd around me jumped several times during the show and it was highly amusing watching such catered appearances move so quickly. At curtain call everyone rose and cheered for the performance. The actors came out three separate times to loud applause and everyone in attendance was thoroughly pleased with what they had witnessed. While walking out you could hear several conversations about how incredibly real the horse seemed. The Capitol Theater looked beautiful from the outside and I marveled at it in reflection of the wonderful night I had had. The War Horse off-Broadway is leagues better than the movie and I highly recommend all Salt Lake theater patrons to come out and enjoy such an exciting show.