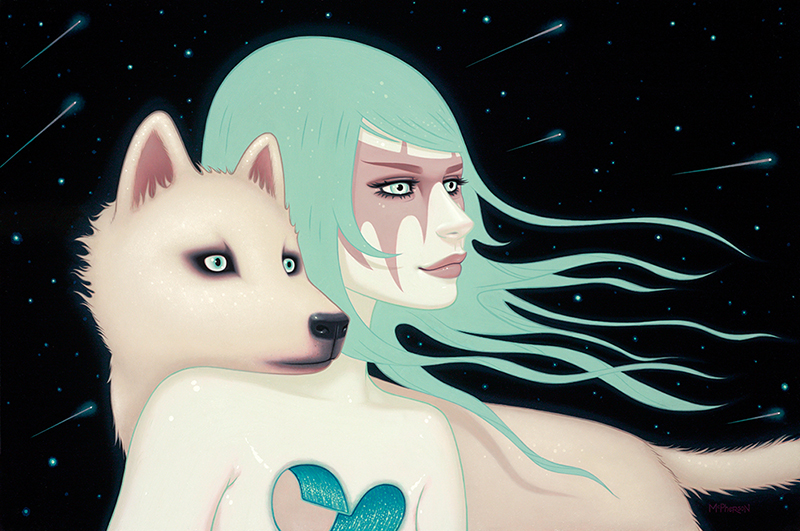 Dreamy portraits in hues of pastel blues and pinks are trademarks of New York–based artist Tara McPherson. Often depicting dainty figurines with a mystical, surreal air, the subjects of McPherson’s paintings delve into myth, emotion and astronomy. McPherson will bring her pop-up shop to Salt Lake on May 7 from 3 to 5 p.m. at FICE Gallery.

With a background in astronomy as well as art, McPherson plays with different scientific ideas throughout her paintings and illustrations. As a specialist in portraiture, these portraits sometimes take on this same scientific edge. In a few paintings, McPherson plays with the idea of Einstein‘s theory of gravitational lensing, the idea that gravity can bend light in such a way that it is often perceived as multiple images of the same thing with slight distortions. McPherson alluded to this theory in a painting from her “Lost Constellations” collection, which shows a portrait as a series of five different images that are all slightly altered from each other, mimicking the idea of the Einstein Cross. “For me, its great to be able to incorporate those ideas into paintings,” says McPherson.

More recently, McPherson has been further exploring astronomical ideas through aurora borealis and quantum energy through her paintings. “I’ve been really fascinated with things coming out of the characters’ eyes, so I’m playing around with that imagery, and this other take on the visual and what can actually be emitted from our eyes, kind of like a star emits light,” she says. Several of McPherson’s paintings feature the subject of the painting casting a wavy, blue aura over their heads from their eyes or sometimes as a pale-pink emission with burgundy spores floating in the trajectory. One specific painting that shows McPherson’s fascination with astronomy and aurora borealis is “Quantum Dancer,” featuring a teal-haired female figure with a cut-out heart shape in her torso and a pinkish hue surrounding her head like a halo. Intricate representations of planets and molecular structures surround her, showing McPherson’s flair for the scientific. “’Quantum Dancer’ is about quantum energy taking these different forms, but it looks like aurora borealis,” she says.

While inspired by her background in astronomy, McPherson’s work also contains emotive qualities that range from her whimsical “Mr. Wiggles”—a black balloon with big, bulging eyes, to the idea of personal strength through hardship, represented by her trademark heart-shaped cutouts in the torsos of her subjects. “Originally, I came up with the idea of that when I was going through a devastating breakup,” she says. “It was really cathartic for me to work through it. I drew that and it just felt right, like ‘Ah, yes, this is how I feel.’” However, the heart hole is not a symbol of sadness but rather rebirth, as McPherson plays with the idea of what the hole is giving way to, whether it is a black hole providing a path to a different dimension, such as the painting “Supernova” or a hole that allows a flower to grow through it in “Hey We All Die Sometime.” “I don’t look at it as a sad, depressive, woe-is-me kind of thing,” she says. “There is a strength in that vulnerability, and you know everything is cyclical. With the supernova, it is the death of a star, but it also puts out all these particles, which are the basis of life.”

The heart-shaped hole makes frequent appearances throughout McPherson’s fine art, and famously as a portrait of the band Franz Ferdinand, with lead singer Alex Kapranos displaying the heart hole and the other members peering through the hole at the audience, which was used by SPIN Magazine in 2005. McPherson, having worked with many notable rock bands such as The Melvins, Mastodon and Blink-182 since the early 2000s, has a desire to return to making rock posters. “I should do more rock posters because they’re so fun to do, and I’ve been doing so much fine art,” she says, reveling in which artists she would love to design for, specifically Father John Misty and David Bowie. “Bowie would have been freaking awesome to have done,” she says.

As McPherson’s pop-up shop travels the country with a stop in Salt Lake City, many of these posters and merchandise, along with fine art, will be available as well as a chance to meet McPherson herself. Having done the traveling pop-up shop for about two years, McPherson enjoys the aspect of being able to meet fans of her work and expose new people to her aesthetic. “The people who like my art are such an awesome, wide range of ages and interests and backgrounds,” she says. “I think its so cool to be able to reach such a broader audience than I would’ve expected. It’s always been neat to meet everyone in person because when stuff is sold online, there isn’t that communication and exchange.” For her, being able to hear the ways in which her art has connected with her audience is a rewarding experience. “Once you create something and release it to the world, it sometimes becomes its own entity, and it’s up for interpretation, and that’s why I love getting to hear the response to certain things,” she says.

McPherson’s pop-up shop will be featured in FICE Gallery in Salt Lake City on May 7, from 3 to 5 p.m. Samples of McPherson’s work and merchandise are available at taramcpherson.com as well as thecottoncandymachine.com.