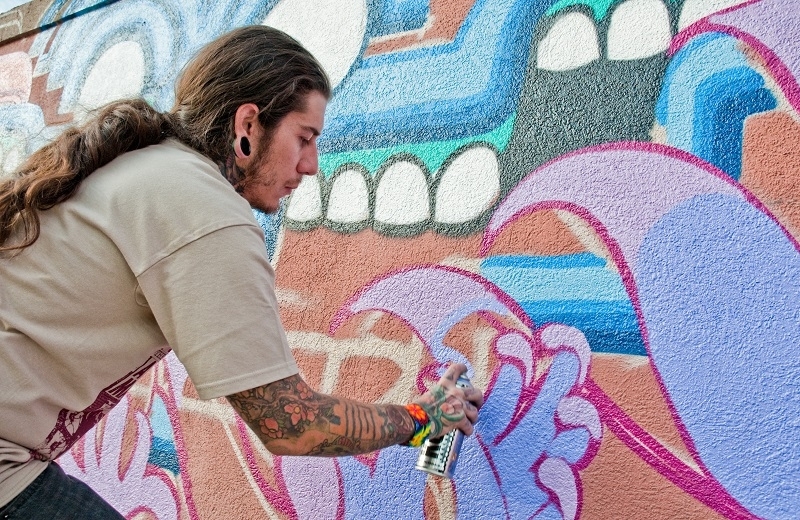 Tacos and Graffiti: An Interview with Anthony Ortega

[caption id="" align="aligncenter" width="800"] Anthony Ortega's psychedelic street art adorns the south side of the Blue Poblano. Photo: Scott Frederick[/caption]
Salt Lake has two new, killer additions: the Mexican restaurant Blue Poblano and a mural by Anthony Ortega. The restaurant is located right next door to Dick & Dixie’s on 473 E 300 S, and they have set up a window that connects the two establishments so you can drunkenly order to your heart’s content. They’re serving up inexpensive, top-notch Mexican cuisine with classic menu items like burritos and tacos, and more unique dishes such as green chile fries. Not only is the interior bumpin’, but thanks to Ortega, the exterior is striking and colorful. For as long as he can remember, Ortega has been dabbling in art. Whether it was ceramics or spray paint, he has always had his hands covered in something. At this point, he has been doing aerosol art for about 15 years.“Graffiti called to me as an artist and led me into pursuing all other forms of art, other than drawing, as a kid,” he says. If he were to describe his work, he would use terms such as psychedelic, trippy or spiritual. Indeed, if you admire his street art, you can sense that he is going for something larger than just slapping a painting on a wall. The colors jump off the wall and seem to stretch out at you. The design is both intricate yet simple and satisfying. Ortega adds, “I don't look up to one specific artist. I get my inspiration from anyone and anything original and creative. From mother nature to writers at the top of the game.” For Ortega, the main difference between graffiti art and mural art is the time that gets put in. “Illegal graffiti would be much more appealing if you weren't on a time and criminal constraint. The whole city could be bright and colorful with all types of culture. Today's culture. Art culture. As Ortega points out, the graffiti scene in Salt Lake is pretty minimal, although what does exist is quality and clean. “I hope to [encourage] other businesses to do the same as Blue Poblano. It brings in the up-and-coming creative generation and shows that art is still here,” he notes. When he’s not contributing to the vibrancy of Salt Lake on walls, he’s doing so on people’s skin. As a successful tattoo artist at Heritage Tattoos in Las Vegas, Nev., he is able to to incorporate aerosol ideas into ink. “I feel like my graffiti style has had a big impact on my color concepts and the line weight and depth I try to achieve.” As for what’s next, Ortega has plans to travel to Japan and paint a pirate themed restaurant and bar, throwing in some tattooing while he’s there. Salt Lake is lucky to have his work, so grab yourself a killer meal at Blue Poblano and make sure you check out his piece on the south side of the building. We have a full gallery of Ortega's work on the Blue Poblano mural. Check it out!
Photos: