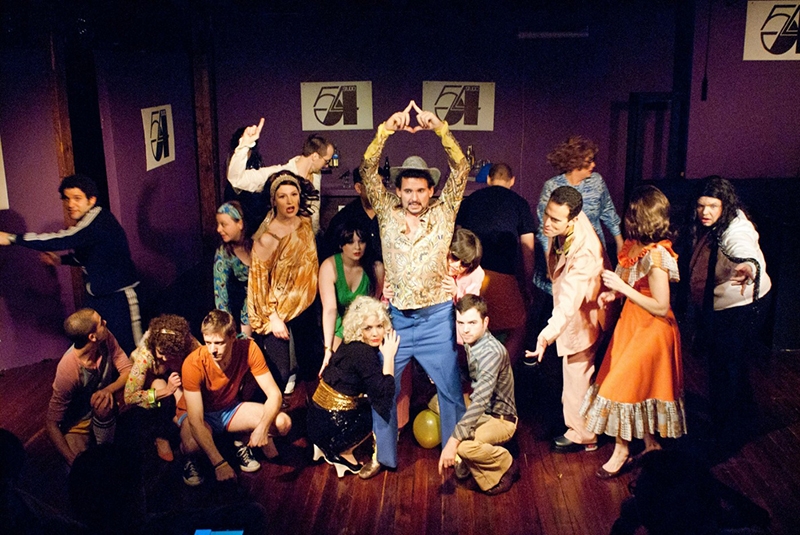 David McMahon’s documentary follows the production of the controversial and drag-fabulous play, Skanks In A One Horse Town. Photo courtesy of Kim Hatfield.

The Skanks are Coming to Slamdance

The history of social and religious conservatism in Birmingham, Ala. runs deep, but even down in the heart of the South, there are pockets of open-mindedness and tolerance. Much like how the Mormon atmosphere here in Salt Lake City has constructed a much stronger-than-normal LGBT community within the state of Utah, the Christian and Evangelical influence in Birmingham has bonded together the gay community in Alabama in a way that strengthens them and makes them even more visible against their conservative background.

Theatre Downtown, a community theater that operates inside an antique store on Birmingham’s Fifth Avenue, is one of the forces working to increase that pocket of open-mindedness and tolerance in the South through innovative and often original plays and musicals. Founded in 2006 by Billy Ray Brewton and Cindy DeSa, Theatre Downtown churns out fabulous productions all year round. Documentary filmmaker David McMahon grew up in Birmingham—and it was only a matter of time before he came across one of Brewton’s plays. “I went to see [Theatre Downtown’s] production of a previous play, an original play called We Three Queens, which Billy Ray wrote, and I was struck by how irreverent and really hilarious it was, and I admired that Billy Ray seemed to have no respect for the conventions of theater and just basically did whatever the hell he wanted to do,” McMahon says.
Luckily, McMahon grew up in one of those pockets of open-mindedness and tolerance. “It was a real lifesaver for me, growing up there. I got exposed to like-minded people and supportive people,” he says. So when he found out Brewton was going to do an original musical called Skanks In A One Horse Town, he decided to give it a shot and turn the experience into a documentary, premiering at the Slamdance Film Festival this month.
Filming Skanks was a bit of a 180 from McMahon’s previous film work, which includes co-directing Bayou Blue, a documentary about a serial killer in Southeastern Louisiana, with director Alix Lambert. McMahon says, “I learned so much from Alix. She’s a wonderful friend and a wonderful director, and really sort of a mentor for me through that process [of directing Bayou Blue]. She thought of things that I never would have thought of on my own … It was a great experience.” When he started looking for his next project, McMahon wanted something a little more lighthearted—something that wasn’t quite as bleak as Bayou Blue, and he ended up with Skanks. The musical, Skanks In A One Horse Town, follows three “skanks” from Studio 54 in 1978 as they travel back in time—with some help from a magic, time-traveling disco ball—to the Old West of 1878, where they, Meat Loaf, Conway Twitty and a cyborg version of Anita Bryant, must stop a railroad baron from building his rail line straight through the town of—wait for it—Deep Hole, and turning it into a ghost town. The musical is raunchy, vulgar and beautifully explicit. McMahon’s documentary follows the production of the show from early rehearsals to the opening-night performance, and includes plenty of in-depth looks into the lives of the cast members. “When I started shooting it, I knew that it was a dirty, controversial musical—ridiculous, certainly, but definitely dirty—with drag queens in it, in a conservative Southern state,” McMahon says.
The controversial material within the musical is certainly entertaining, but it’s the characters behind the scenes who truly make this film come together on a much larger scale. As a main cast member, Chuck Duck is one of those standout characters. “When we found out David was doing a documentary on the show, [we were] super psyched, but nothing could’ve prepared me for the experience of having cameras following us around at every rehearsal. It was so much fun. I loved the whole experience. David and his crew were such sweethearts,” says Duck, who plays Oklahoma Jackson—the main skank within Skanks In A One Horse Town.