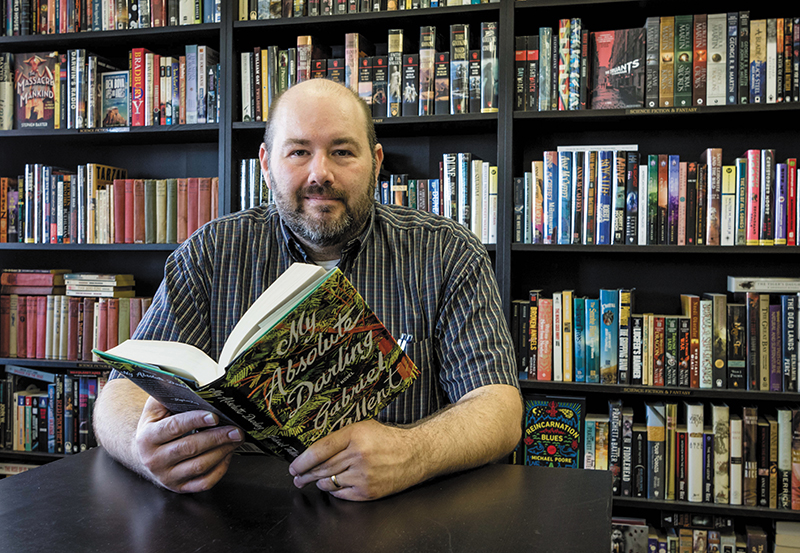 The Third Space: The Printed Garden’s Good Reads and Grounding

Nestled in the quaint Union Square plaza in Sandy is an unassuming yet welcoming, white storefront. The Printed Garden is the culmination of founder Aaron Cance’s numerous years in the literary world, one he refers to as “the end result of an evolutionary process.” Cance’s career has spanned decades and taken him across many shelves, beginning in Wisconsin, continuing into a master’s degree in British & American literature and landing at local literary standbys Ken Sanders Rare Books and The King’s English. The model for The Printed Garden was a shop in Boulder, where the new and antiquated intermingled, a blend that sets The Printed Garden apart from larger chains. “The store came together very much how I hoped it would,” says Cance. “I didn’t actually get the doors open until Dec. 3, [2015]. Last holiday season went really well for us.”

Cance is clearly a storyteller at heart. With a soft, suedey voice and soothing presence, he takes time to connect with each customer who strolls in the door, pleased to help them seek their perfect page-turner. “My very favorite thing is the person who comes in and says, ‘Give me a good novel!’” he says. I inquire about the oddities Cance has encountered in his tenure in the world of antiquarian booksellers. “One of my rarest books was a Thomas Mann, best known for A Death in Venice and Dr. Faustus. I found a book written by him in a pile of old ones being cleared out. It was in German, and I don’t speak a word, but I was able to discern enough about the book to understand it was a journal he kept while he was writing Dr. Faustus. The most captivating thing about used books is finding that odd, strange book … You never know it until you see it.” Cance continues that the rare Mann book included an inscription to a friend—“I just about fell out of my chair!” Cance tells of the store’s current copy of Seven Years in Tibet, too, signed by author Heinrich Harrer in both English and Tibetan. Cance’s voice lights up a bit as he describes this poignant treasure atop the shelves of his beloved space.

What sets The Printed Garden apart lies in the conscious nature of its creator. “By coming to this store, people can have a very personal experience,” he says. “I am here by myself … I try to greet everybody and get to know them on a first-name basis.” Cance grumbles appropriately about the algorithms of major online booksellers that parade themselves as personal and individualized. He chuckles as he describes the often laughably obvious offerings of the online literary market. “They’re all calculated on sales and very cold criteria,” he says. “[The store] is a human interaction, not a metric. One of my favorite things is when my customers start talking to each other and make a connection.” The store also offers programming that reflects Cance’s mission via frequent onsite author visits, including local writers. “We also do a children’s storytime every Wednesday at 5 p.m—it’s so much fun,” he says.

Cance’s growing vision for The Printed Garden includes added staff to maintain the personalized connection with customers. Cance notes the slightly sparse hours of the store—the product of his solo operation intersected with his personal ethic of still being available to his family. “I think the next thing is to have some extended hours,” he says. “I would love to put in a loft [above the children’s section].”

When asked about his store’s contribution to the local literary culture, Cance recounts a story of his time at The King’s English. “I wasn’t even there for this, but it’s a part of their lore,” he says. “On the day after 9/11, their store filled up with people. They didn’t want to stay at home; they didn’t know where to go, but the store had become a safe and comfortable space. I want this store to be a safe space for people, where they can be who they are … [where] they can express themselves freely. There’s a lot of talk in different industries about ‘the third place’: There’s work and there’s home, and where do you want to be when you’re not at work or home?”

Cance paints a picture of the writing groups and individuals who collect at his store, making their “third space” out of The Printed Garden. “One of these days, I’m going to reach out to a local coffee shop and see if they want to put a small coffee bar in here somewhere, because books and coffee …” He trails off and smiles, the appropriateness of such a collaboration all too apparent.

The Printed Garden celebrates two years this December, and I ask Cance about his favorite book to give as a gift, especially during the holidays. “The book I brought in for this holiday season: The Guest Cat by Hiriade,” he says. “It’s just this very comfortable short fiction about this young Japanese couple, and a cat wanders into their house and stays and just becomes a part of their lives. It’s a quiet, satisfying, pleasant little book.”

Comfortable, quiet and safe are more than descriptors of the books neatly lining The Printed Garden’s shelves. They are also the central spirit of the store itself; the “third space” Cance has crafted with heaps of heart.