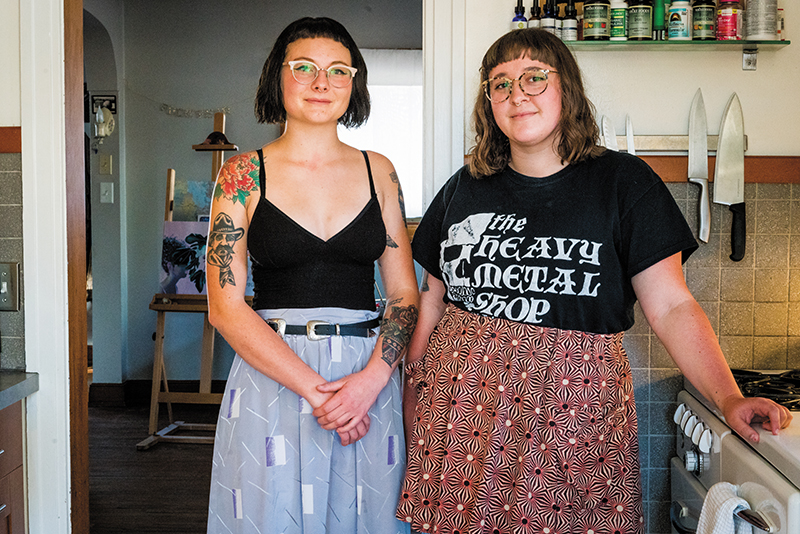 Elaine Sayer and Chloe Monson are a duo of 21-year-old artists who made their way into Salt Lake City’s community earlier this year with the creation of their successful submission-based, gender-conscious zine series, SLC Pink, for women, trans and non-binary artists. Similar to the efforts of other local zines such as Pillars of Salt and that of The Medusa Collective, SLC Pink lends itself to the growth of safe spaces in our town for artists who occupy oppressed and over-looked identities. Now, with two sold-out release parties at Kilby Court and a few hundred distributed copies behind them, the two are announcing the birth of their experimental zine company, Good Phats, and the reveal of their newest project, Write or Cry. “Good Phats has been the whole reason for everything we’ve been doing, but it’s just been patiently waiting for us to be ready,” says Sayer, who has a gift for always sounding enthusiastic, “and now we’re finally ready, which is terrifying.” Good Phats, which will include SLC Pink in its roster, is the new platform and house name for the two to launch a variety of planned zine series, comics, poetry and their collection of personally designed patches, pins and apparel. In the past year, both Monson and Sayer have put a lot of their personal art on hold in order to make SLC Pink happen. And while they plan on having the third edition out this summer, they took the winter off to grow into their own artistic sensibilities. “I was inspired by all of the artists who submitted to [SLC Pink] and getting to make those connections,” says Monson, “and now I feel like Good Phats is coming in the perfect time.”

In February, the Good Phats crew is publishing their earliest zine idea, Write or Cry, whose name plays off of the popular skate phrase “Ride or Die.” The title seemed fitting, given both skateboarding’s contribution to DIY zine culture and the chance to re-direct the suggestive power of its all-or-nothing assertion to express vulnerability. For Sayer and Monson, “Write or Cry” has literal practicality. “I have this weird problem that if I don’t journal, I get super depressed—my mental health is not okay,” says Monson. “I have to write everything out as a process.” Between the two of them, the motto was born out of a mutual need to sublimate their personal anxieties into artistic expression. “I wish somehow we could show everyone our text threads when we were like, ‘I felt like shit but then I wrote about it and now I’m fine’,” adds Sayer, “and we know we’re not alone in that idea.”

Thus, Write or Cry seeks to blend a variety of artists, both amateur and professional, who combat their personal struggles with depression, anger, anxiety, etc. by creating art of any kind. It’s an idea partly inspired by the book The Do-It Yourself Guide to Fighting the Big Motherfuckin’ Sad by Adam Gnade (who actually submitted to Write or Cry). Every entry in the zine will be predicated by a personal narrative from its contributor explaining how making art serves their well-being. The goal is to remind all readers that they’re not alone and to encourage them to keep seeking creative outlets. Although they aren’t releasing the names of all of their contributors quite yet, they have said that they are surprised at how many of their heroes responded to being a part of the project. “We want people to see artists from all over the spectrum,” says Sayer. “I think it’s really important for us to get artists who have made it and are doing things, because that alone is an inspiration to me…So also hearing that they still struggle with these issues is life-changing.”

Along with Write or Cry, Good Phats are releasing yellow pins that say “I Support You” in Monson’s signature cursive. The message is meant to spread the shared goal of uplifting everyone who’s attempting the difficult task of making art. Obviously, the phrase can’t be universally applied. However, the goal of the “I Support You” pin is to spread encouragement for everyone in the community to just keep creating. A big part of Monson’s and Sayer’s mission with all of their projects is to increase empathy and to relieve the insecurity behind judging one’s work too harshly or being competitive with artistic peers. Having known practically nobody when they first asked for SLC Pink submissions, they were overwhelmed at how many hidden artists reached out to them when given the opportunity. In a refreshing way, the perspective inspired them to feel generous. “Sure, ‘I Support You’ has its flaws, but it’s our slogan because we really do. We just want to be your art mom,” says Sayer. “Besides, we’re not going to be around forever… If anyone wants to make a submission-based zine in Salt Lake, or anything for that matter, we’ll totally support it.”

Sayer will showcase her writing for the Apr. 21 Gallery Stroll at Fellow Shop (217 E. Broadway), and Write or Cry will release on Feb. 8 at a Fellow Shop pop-up show. Unlike previous SLC Pink events, the Write or Cry debut will take place all day (11 a.m. to 7 p.m.), giving the two plenty of time to meet and talk with anyone who’s interested in Good Phats’ work. To learn more, you can visit their website at goodphats.bigcartel.com or email them at goodphatszineco@gmail.com to get involved with future projects. Seriously, do it. They’re super nice.