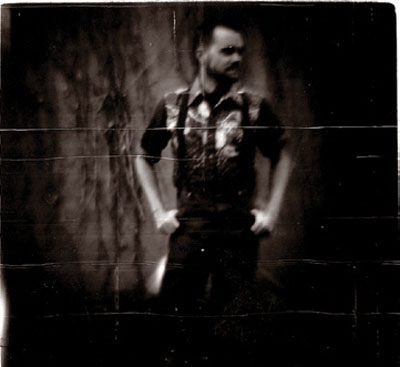 Perhaps you’ve heard about his jeweled cockroaches and about the Black Chandelier boutique. Or maybe you’ve heard talk about that one runway show that floored the fashionistas in the old Grand Hall Train Station for his Caspian runway Collection. Regardless, you’ve definitely heard about him: fashion designer Jared Gold.

Too many words can be used to describe Gold. But he is all these things: fashion icon, tiny-toy rockstar, perfume aficionado, horror-movie fan and chocolatier. Salt Lake City has never seen a beast such as this and perhaps it was never quite ready for Gold’s genius. Although he describes what he does modestly, “I just like to make cool stuff. That’s what I want to do,” he has hit the top of the fashion world and is pushing the ceiling (expect a TV show very soon, more on this in a bit). His accomplishments are all very impressive coming from a guy raised in the metropolitan burg of Idaho Falls. Gold trained at many prestigious schools in varied disciplines, polishing up the accomplished fashion impresario he has morphed into at The Otis School of Design in Los Angeles and at the Piano Conservatory of Hawaii.

Unfortunately for Salt Lake City, Gold recently relocated to Los Angeles where he says, “I love it. It is so easy to live there and do what I’m doing. There’s a support system. I have this really fabulous penthouse in Hollywood. I don’t have anything to complain about.” He still has fond recollections of Salt Lake City though, “I really like Salt Lake. I love living here. I love the snow. I love how receptive everyone was of something kinda freaky in what I was trying to do. It is shocking when you explain elsewhere what you did here and how everyone responded to it. They can’t comprehend. Just because it’s a really conservative place in their minds.”

Perhaps the unfortunate undoing of Gold’s Black Chandelier experience in Utah was how quickly successful it was: it ballooned too big, too fast. “I was working with a financial partner and he was adamant about opening as many stores here as he could and there ended up being four, which was far, far too many. I think one would have been sufficient. It basically bombed-out the market: too much supply and not enough demand,” Gold explains.

Although Gold may have helped launch the Black Chandelier name, he does not own it. He designs under his own moniker now, and the experience of separation from what he created is still painful. “It was business decisions that closed it down. The stores were quintessentially a success. I was not in power to make decisions like that. Believe me I did my best to state my case. It was sad for me,” Gold sighs. “But I got lots better stuff cooking now,” he adds. And he does. QVC called during the interview about an exclusive collection and a separate conversation interceded regarding a reality TV show that is more than in the works: it is one step away from being on-air.

Regarding QVC, Gold says, “If it’s good enough for Marie Osmond, it’s good enough for me,” with a rogue’s smile. Gold is a bit of a rogue, a renegade if you will. And that word may play heavily into the title of the new reality TV show, but all of that is not set in stone. Gold is very reluctant to give further details until papers have been signed, but he will be appearing on your cable box very soon. He reveals this about the whole experience and genesis for the show, “I want to make sure that what people experience, what happened here in Salt Lake where people were emboldened and then interested in trying things themselves, I want that and feel like that can be a big thing, can be universal.”

Gold’s reality TV show concept encompasses a similar experience that denizens of Salt Lake received earlier this year at Gold’s spring 2008 Czarina runway show . Hitting the road with a fashion tour to ten U.S. cities, Gold will hand-select a new set of models in each town to walk the runway in his show that very evening. Armed with his designs and a traveling retail store, each fashion show will prove to be an exclusive Jared Gold experience. “We’re doing the tour regardless of the network, so if you guys want to bolt on cameras and give me money, fine. If not, piss off ‘cause we’re going,” Gold says. At press time no network deals have officially been sealed but the cities selected have been announced. Gold says “There’s certain networks where the styling is too intense for them and may spook people because I’m not gonna back down. What, am I supposed to walk beige pants and a dress shirt down a runway? Because no one will come.” On conceptualizing the whole show creation experience with media-giant and partner Hearst, Gold (the Executive Producer) says, “Lets just say it’s going very well.” 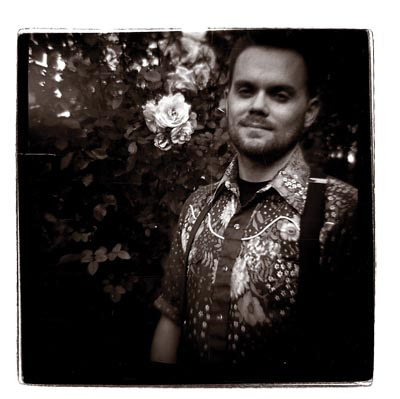 Gold has other TV work lined up as well. He will be filming Germany’s Next Top Model with Heidi Klum (Europe’s second-highest rated show) on December 16th. “They get to show the whole collection and I get to make sure the whole collection is there. Next Top Model did really well for me,” Gold reflects, referring to his experience with America’s version of the show featuring his spring collection in March of 2006. “But they [Germany’s NTM] of course want the cockroaches on there,” Gold says.

That bejeweled-bug Gold is sometimes best recognized for just popped out of the ether, apparently. “Everyone asks me ‘Where does the bug come from?’ and I’ve never come up with a smart, quippy answer. But that’s what I do for a living: I come up with dumb stuff like that. The fact that people think of that [first] is fine because it’s led a lot of people to my work. And it’s like ‘Oh it’s so gimmicky!’ But a gimmick is just a really good idea with a lot of firepower behind it,” Gold says. “We were on CNN with that.”

Inspiration does trickle down through Gold’s subconscious and he is very in touch with his emotions and how that impacts his art: “How I design and how I see things is so delicate it can easily be upset by anger, and all sorts of things, so I have to keep that stuff out of my system,” the artisan says. His inspiration comes from myriad sources, “I spend a lot of time cramming things into my head and it kind of mixes up and it comes out how it comes out — slasher movies, pefume. I am a bit of a perfume obsessor. I like historic stuff,” Jared says.

“I have my library with me which is tons and tons of books on artists and designs all through history. I just am constantly inputting things and when it comes time to draw it comes out somehow.” His delicate artistic balance can be upset, if he lets it, as he saw recently in his new city.

Gold resides in the hotbed of political and social activism of the recent Proposition Eight debacle in Los Angeles. Having been raised a member of the dominant faith in this region, he had an interesting experience seeing the coin from both sides: as a gay man and an “ethnic Mormon.” “I’m just a mutt––a weird mix of bloods. And everyone’s like what nationality are you and I’m like ‘I’m Mormon, that’s my lineage.’ And especially recently it’s really hard,” Gold says of his experience in Los Angeles during the support and protest of the controversial public ballot initiative to revoke the California Supreme Court ordained right to allow same-sex unions (Californians disappointedly voted against equality––again).

Speaking further on the matter Gold reveals, “I took it upon myself to drive down the street on my bike where everyone had “Yes on 8” and yell “bigot hater bigots” at these people. So I took it out on them a bit and felt better,” he says. But he adds disappointedly, “Looking at these people: these mom and these kids with their church clothes on standing on the corner on Sunday –– they don’t know me. They’ve been taught there’s some predatory gay person trying to turn their children to the dark side of the force,” he says sadly, then good-naturedly adds with a laugh, “Look, gay people are far too selfish for any of that nonsense. It’s all about me. I don’t want kids: I don’t have time for that crap, all of a sudden your life is boring and stinky.”

Gold seems at ease with himself and the person he is today, but not after his share of personal struggle. “I felt like an outcast second-class citizen my whole life. It gets to a point where you’re enabling just being gay and being Mormon. You’re enabling them to treat you like that. And I said ‘I have to sort out what I’m doing here.’” So he clears the mess from his head, preventing it from bleeding through into his work, and enjoys what he loves about California — riding Vespas, making candies by hand (visit etsy.com and look for seller “Jared Gold” for his delicacies and even some one-offs) and occasionally he visits a Korean spa.

Putting the Prop. 8 matter to rest he says “I’m not planning on ever getting married. It’s like gays wanting to be in the military. The joke is ‘Why do they want to be in all the worst institutions straight people have?’ The military and getting married, come on. The sanctity of marriage… did you guys remember the time Michael Jackson got married? Oh that was very sanctimonious,” he says.

In spite of it all Gold is empathetic and says with finality, “I just feel bad that the religion has clouded people and they do whatever they [The Church Elders] say. And they’ve been given bad information. I don’t think these people [the anti-gay zealots] are bad people or that they would ever do anything that they knew was directly hurting people. But I feel like they really just didn’t understand. As per the rest of my life, you have to end up forgiving these people otherwise, you just get furious.”

And furious Gold is not. He seems at peace with his upbringing: “I feel spiritual still,” he confides.

When Gold’s not busy designing, which is most of the time, he is thinking up new ways to entertain and enlighten audiences. Gold’s band, The Misfit Toys, a musical project with the motto “If it’s fun we’ll do it,” is experiencing a new life in LA. “The Misfit Toys now are being culled from a bunch of old punk bands in LA: People from Jackoff Jill and The Germs––so its getting a little more freaky. I thought. ‘While I’m here why don’t I get people who can really play these instruments?’” In the spirit of the motto he says, “The joke carries on when someone from a punk band is in The Misfit Toys and they’re covering a Carpenter’s song on a little pink violin. I think in the summer we’ll actually play a couple of dates.”

Anticipate big things from Jared Gold this coming year: a TV show, a new collection, and perhaps, if Salt Lake City is lucky, a visit from punkers playing tiny pink instruments. Gold leaves us with more than that, though. Reflecting on his time spent in Salt Lake City, he says “I hope I was able to change something for the better. That some people walked away from it totally inspired to do stuff. That’s all I would hope: that while I was here I was able to change something or leave behind some sort of legacy… but you never know.”