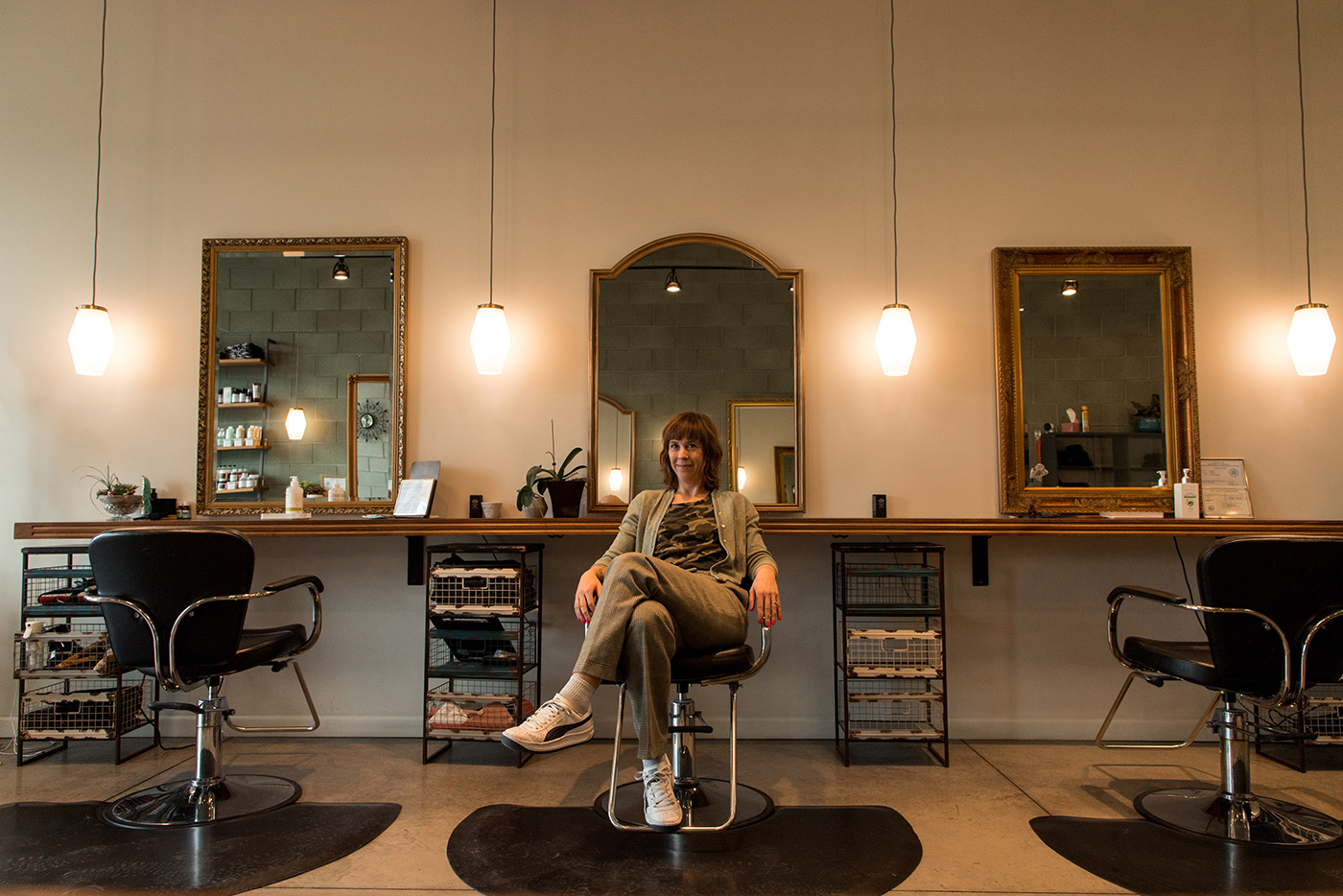 Memorie Morrison is a hairstylist, Owner of Central Ninth’s Troubadour salon and a local musician. In the music world, she’s known for her band ¡andale!, for whom she played and wrote music. With regard to her sartorial style, Morrison has developed her clothing collection to be understated yet colorful, a continual, quotidian expression.

Every month, SLUG Style features a distinct and unique member of the community and asks them why they do what they do. Exploring more than just clothing, SLUG Style is an attempt to feature the people who give Salt Lake City flavor through personality and panache.

SLUG: What are your stylistic influences? This could be a band, decade, fictional character—anything.

Morrison: Literally everything and everyone—I think I’m going into a pink is punk phase.

SLUG: Where do you source the pieces you find? We hear that you’re a prodigious thrifter!

SLUG: When you’re seeking out clothing, what kinds of pieces tend to stand out for you, and what has been a surprise find that you’re proud of?

Morrison: It just has to be special in some way … When I was in France before the pandemic, I really wanted to find a vintage dress. I had no idea what it would look like, but when I saw this dress, it was exactly what I wanted; I didn’t even try it on. I’m also trying to be more thoughtful about only acquiring items that are well-made or unique so they are more likely to become treasure for future, secondhand enjoyment and not garbage.

SLUG: How does owning and working at your salon, Troubadour, influence your sense of style?

Morrison: When I started out on my own, I refused to wear black for a couple years. Since opening Troubadour in 2016, my colleagues have inspired me to start wearing it again, but not very often.

Morrison: The salon vibe and my vibe are one and the same. I try to keep it relaxed but elevated. I like to call it “fancy you can put your feet on.” Luckily, my hairstylist colleagues have no problems looking the part of a creative professional, so I don’t really have to set any kind of example.

SLUG: What’s your role in Troubadour’s community council? Any outfits that you curate for those kinds of functions?

Morrison: Well! My role on the Central Ninth Community Council is Secretary … It’s a pretty casual community council, so I usually just show up as is.

SLUG: What are your interests or hobbies? What is the hobby or interest that you have that no one would realize to ask you about?

Morrison: I am obsessed with spin! I go to Mcycle. I started that a year ago when my friend Angela asked if I wanted to try it with her. Obviously, I like going to thrift stores. Camping, fishing, Lagoon … I guess my secret hobby is thinking up names for bands, businesses, plants, pets, etc. I spend a weird amount of time thinking about names.

SLUG: For those who may not know, who was the band ¡andale!, and what did you play in that band?

Morrison: ¡andale!, aka your favorite band’s favorite band, was a cute little project my friend Tasha and I started in 2005. We scored the talent of our friend Mike and Tasha’s partner, Josh, a little while later. I wrote basic song structure, words, sang and played guitar. I’ve been told we sounded like bands I never listened to, like Sleater-Kinney. Go figure.

SLUG: In what capacity are you still playing music, and how would you describe it?

Morrison: Garageband, haha. I didn’t play for years, I think my creativity was directed at learning how to run my own business and birthing Troubadour. I have just barely started playing again.

SLUG: How has being a musician specifically influenced your style?

Morrison: I think it made me consider how my clothes can reflect how I feel. It is definitely more of a creative expression for me since I started playing music.

SLUG: Are you always “on,” or would someone see you at the grocery store, for example, with less elements of your style?

Morrison: I am always on. Even when I look like a shit, it is totally on purpose, and I’ve tried very hard to look this way well.

SLUG: If you had to describe your style in three words, what would those be?

Morrison: I have no words for it—that’s why I use clothes to explain myself! Pre-advanced style, maybe? How about uncomplicated, colorful and intentional.

SLUG: How has your personal style evolved over time?

Morrison: I would say that my style has gone from coffee-shop girl in my 20s, rocker in my 30s, and now I’m a boss bitch, hahaha.