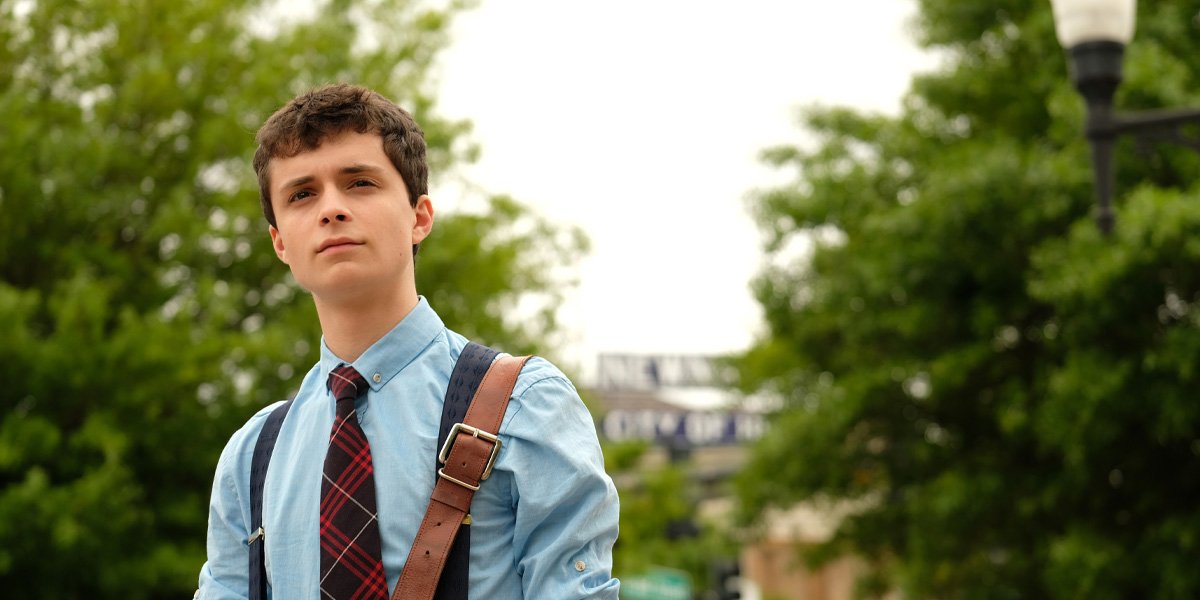 Some movies seem to exist only to prove that indie filmmaking can be just as stale and soulless a commodity as Hollywood blockbusters if they are in the wrong hands. Dr. Bird’s Advice For Sad Poets is a prime example of such a film. It’s the story of 16-year-old James Whitman (Lucas Jade Zumann, 20th Century Women, Anne with An “E”), who idolizes Walt Whitman and aspires to be a poet himself, but he struggles with anxiety and depression, as well as his Michael Cera impersonation. James is unable to speak about any of his problems with his parents because his mother (Lisa Edelstein, House M.D., The Kominsky Method) is a dismal wreck, and his father (Jason Isaacs, The Patriot, Star Trek: Discovery) is angry, domineering and, at times, abusive—emotionally and sometimes physically. He’s referred to by James and and his mother only as “The Brute,” as if they were all characters in a Roald Dahl book.

James instead confides in an imaginary pigeon, Dr. Bird, who is voiced by Tom Wilkinson (Michael Clayton, The Grand Budapest Hotel). James is troubled by the departure of his sister Jorie, who was tossed out of the house by The Brute—seriously, they call him that every time—and obsesses over where she is and what she is doing, as she hasn’t responded to his texts or calls since she left. Meanwhile, he’s constantly belittled by his best friend and harbors an intense attraction for a girl, Sophie (Taylor Russell, Lost in Space, Words on Bathroom Walls). James embarks on a whimsical journey to find Jorie, woo Sophie, resolve his anxiety issues and refer to his father as The Brute until someone in the audience is delighted by the offbeat quirkiness of it all.

Screenwriter-Director Yaniv Raz (Son of Morning) seems to think that the novel by Evan Roskos is destined to be the next Rushmore or The Big Lebowski—not that those films are interchangeable or even particularly similar in anyway apart from being great—and he takes a sledgehammer-to-the-face approach to the debacle, all the while under the mistaken impression that the material is witty, endearing or insightful. It’s actually just a trite and insipid mess. There’s hardly a single forthright or sincere moment in this self consciously cutesy, teen-angst dramedy, not only failing to feel like an honest portrait of depression but leaving one wondering if Raz has even spent any significant amount of time among actual humans, as he seems to be so utterly incapable of relating to them.

The lead performances are pretty weak, with Zumann trying to make the best of things but flailing with the character, and the talented and endearing Russell entering into mid-’90s Meg Ryan, “Oh, wow, I just realized I’m like, totally cute—I’m gonna milk that to death!” territory. Edelstein just stares off into space as if she’s longing for some direction, and the always difficult to watch David Arquette is just plain unwatchable in an idiotic cameo as a shirtless cult leader. Isaacs and Wilkinson are the only ones who come through with their dignity marginally intact, and in Wilkinson’s case, it’s because we don’t see his face, and he probably spent less than a day working on this film. But Isaacs really commits to his performance and his flawless American accent, which he play it with as much subtlety as his director will allow. My hat is off to him. The one or two moments when the script allows us to catch a glimpse of the human being inside “The Brute” (it’s just so quirky!) are the only times that I actually found myself pulled into anything that was going on. Will someone please give this splendid actor the vehicle he deserves?

My hostility toward this film is based primarily around both its incompetent handling of serious subject matter, such as mental illness, domestic violence and the shocking waste of the talent—and David Arquette—that has been assembled for it. Dr. Bird’s Advice For Sad Poets offers nothing of value and will likely fade from memory quickly, assuming it makes any sort of mark or impression in the first place, which I find to be unlikely at best. But hey, the font they used for the ending credits was fine, so that’s something. –Patrick Gibbs