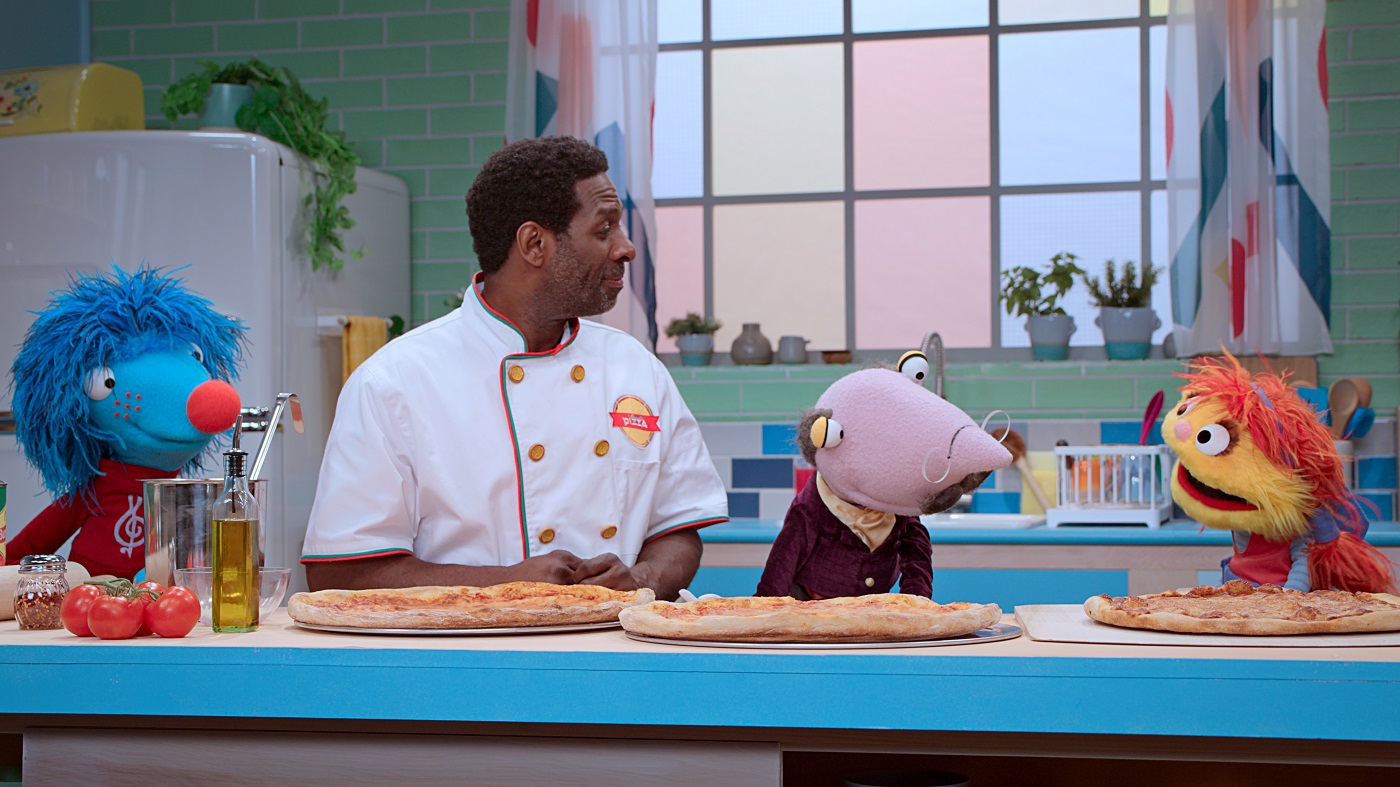 Sesame Workshop has been at the forefront of education through television for decades, and when partnered with Apple, one of the biggest names in the tech industry, the potential for innovative edutainment is nearly limitless. This October, two beloved Sesame series are returning to AppleTV+ with all new episodes.

The Emmy winning Ghostwriter, rebooted from a cult favorite from the early ’90s, centers around a team of Brooklyn middle schoolers who solve mysteries with the help of a ghost who communicates by manipulating text and letters, using them to form words and sentences. The series has not only kept true to the spirit of the original in terms of its focus on diversity, but it’s also doubled down on that mission.

“There’s no question it’s very important for people to see themselves on screen,” says Luke Matheny, a writer-director on seasons one and two. “Especially people who aren’t used to seeing that too often.”

“There’s no question it’s very important for people to see themselves on screen.”

In season one, the kids met characters from Lewis Carroll’s Alice in Wonderland, but instead of being blond haired and blue eyed, Alice was half Asian. “I think there’s kind of an assumption sometimes that different fictional characters should look a certain way or sound a certain way,” says Matheny, adding that they consciously tried to tear away from the popular framework of those traditionally white characters.

Matheny is eager to unveil season two, with the characters still reeling from a surprise reveal. “I’m excited for audiences to see how our kids adapt to this new kind of landscape,” he says, “and work together and really get their teeth into this mystery, which only gets deeper and more mysterious as we move forward.”

I also spoke with Isaac Arellanes and Amadi Chapata, the young actors who portray Ruben and Chevon, respectively. As two of the main characters on the series, they say that they felt more comfortable inside their character’s skin this time around. “It’s an effort, being on set continuously, learning to be a better actor and enhance your craft,” Arellanes says. “I feel like we all evolved substantially with our characters, growing their relationships, and just with acting as well.”

Chapata, a Broadway veteran, worked overtime to get inside her character in the second season. “I really tried to ‘become’ Chevon,”  she says. “You know, sometimes I would get off set and still be Chevon. At lunchtime, sometimes I would go to my trailer, act like Chevon. How would Chevon eat, smile, stand, sit…you know?”

“I’m excited for audiences to see how our kids adapt to this new kind of landscape.”

Also returning for another season is Helpsters. In season two, preschoolers can continue to explore the power of teamwork as the puppet characters solve problems using logic and planning and introduce kids to the rudimentary skills of coding. The Helpsters approach any challenge with a can-do attitude because everything starts with a plan.

Cody, the young female monster who serves as the de facto leader of the group, believes that the feeling you get from helping others is the best feeling in the world. “It’s like, ok: You know that feeling you get when you give someone a present for their birthday or something?” she says, eyes sparkling. “That’s what it feels like to help other people!”

Cody’s philosophy of leadership is that a leader is only as good as their team, and she loves her team. “I got my buddy-bud Scatter,” she says, “I mean … he is the kind of friend that sometimes gets paste in his hair, but that’s okay, because he works hard, and he doesn’t quit.”

“There’s a lot of people out there that are dealing with problems, both big and small, and sometimes … the answer to what they need to do is not right there in front of them.”

The rest of the team is made up of Heart, the big, fuzzy orange heart of the group, and Mr. Primm, for whom Cody has a lot of admiration. “He comes up with some great ideas. When you see his mustache twitching, you know there’s an idea percolating in there.” And finally there’s the blue-furred Jackie, whom Cody describes as the “go-to monster.”

Jordan Geary, the Senior Director of Production and Development at Sesame Workshop,  was helpful in answering my last question: What can we all do to be better Helpsters? “The best way to be a Helpster, in my personal opinion, is to be someone who helps others come up with a plan,” he says. “There’s a lot of people out there that are dealing with problems, both big and small, and sometimes … the answer to what they need to do is not right there in front of them. They just need that little spark, that little something that pops in and just helps them get over that hurdle.” Geary goes on to say that at the end of each day, he likes to ask himself the question: “Have I helped anyone today?”

Season two of Ghostwriter premieres on AppleTV+ on Oct. 9, while Helpsters returns on Oct. 16.