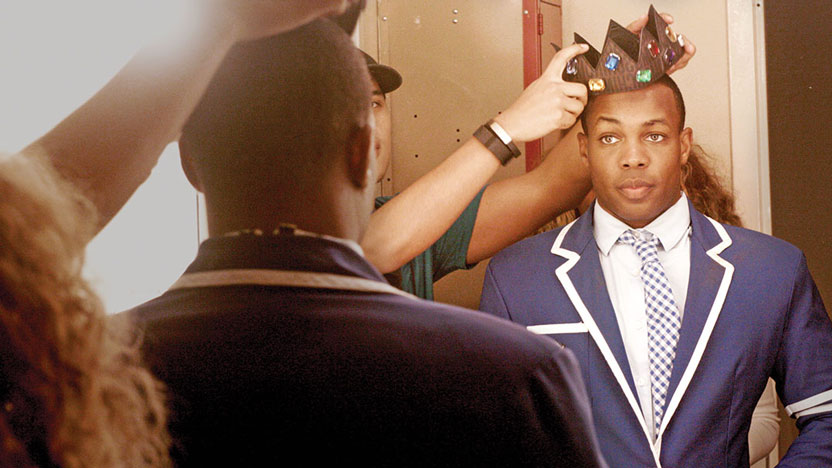 Damn These Heels 2017: Behind the Curtain: Todrick Hall

Behind the Curtain: Todrick Hall

Meet Todrick Hall: American Idol semi-finalist, RuPaul’s Drag Race guest judge, Kinky Boots on Broadway star, singer, rapper, actor, dancer, director and choreographer. Most prominently, Hall is a YouTube sensation—one I stumbled upon back in 2011 when he uploaded his intricate flash mob choreography, filmed in a Target store, to Beyoncé’s “End of Time.” Now Hall boasts over 2.5 million subscribers on his YouTube channel, where he shares extravagant and high-production parodies (“Cell Black Django,” “Hocus Broke-us,” “Twerkin’ in the Rain”), as well as original songs and collaborations that include the likes of RuPaul, Joseph Gordon-Levitt and Nicole Scherzinger. In 2016, Hall decided to take on one of his most arduous and ambitious ventures yet: Straight Outta Oz, a 16-song album with an accompanying live tour and 16 music videos—that needed to be shot in two weeks.

Director Katherine Fairfax Wright’s (Call Me Kuchu) Behind the Curtain: Todrick Hall follows the charismatic star as he begins the Straight Outta Oz undertaking. Toying with imagery, quotes and themes from The Wizard of Oz, Hall’s version explores his own life, identity and rise to fame. As he and his team hustle to design and craft flawless costumes, choreograph music videos, build intricate sets and rehearse, Hall’s fast-paced creativity and resourcefulness shine. In between it all, Hall still has time to take a photo with his fans and post it on social media, sign posters and finish a song hours before filming. Hall’s work is gleeful and dazzling, but it’s subversive, too, un-whitewashing and queering pop culture; and it quickly becomes clear why Hall, as a black gay man, has become an icon, hero and source of strength to so many youth and LGBTQ fans.

In the midst of all this hectic creative energy, Wright intersperses her documentary with cameos of Hall’s collaborators—Bob the Drag Queen, Wayne Brady, etc.—as well as clips of Hall’s work and interviews with those close to him. Although Behind the Curtain is less a nuanced character study than it is a tribute to Hall’s accomplishments as an artist and celebrity, Wright evenhandedly lends an intimate element to the documentary. Through home videos and interviews with Hall and his mother, we begin to discover the star’s roots. Certain anecdotes feel especially resonant, like when Hall mentions how his mother drove him over an hour each day to dance classes, or when his mother recounts how, when a young Hall was cast as Clara’s brother in a production of The Nutcracker ballet, audience members took issue with Clara having a black brother.

Behind the Curtain doesn’t shy away from the wider, contemporary implications of race in America, either. Wright films Hall as he solemnly watches coverage of a Black Lives Matter protest and, later, one of his cast members as she delivers a passionate call-to-action for allies’ vocal support of the BLM movement. The day after the Pulse nightclub shooting, Hall achingly remembers his own times at Pulse and the freedom and acceptance he felt there, and scrolls through images of the victims, having met several of them.

Throughout, though, Hall remains driven and dedicated, focused on his mission. His final work, both the Straight Outta Oz audiovisual album and the series of live performances, were glittering successes, selling out venues and hitting the charts. Like Straight Outta Oz, Behind the Curtain: Todrick Hall affirms and celebrates Hall, his art and the joy, acceptance and inclusion he brings to his fans. –Kathy Rong Zhou