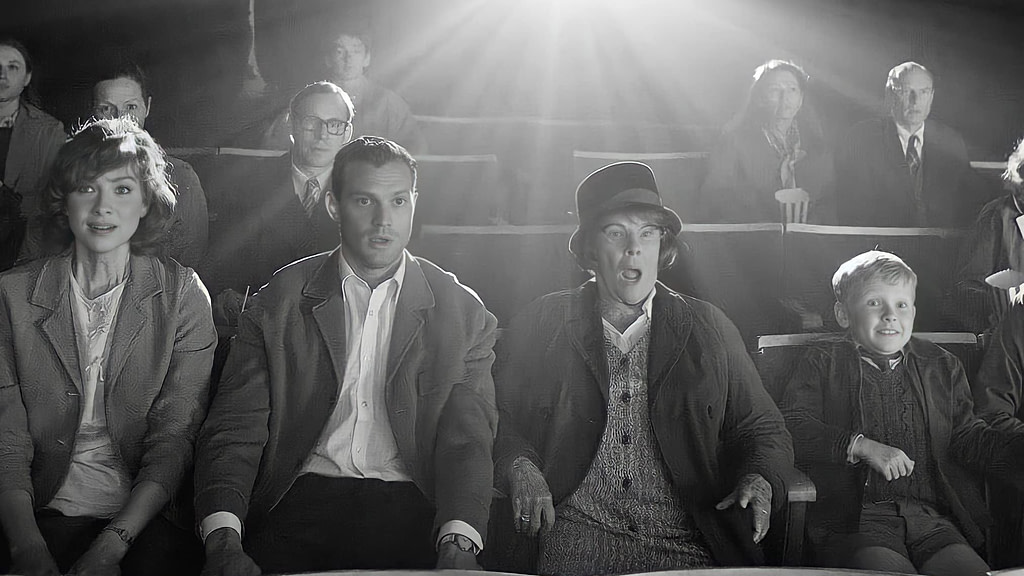 As a teen who was into both stage and cinema, Kenneth Branagh was a major figure and film idol who played a big role in teaching me to love Shakespeare. He was to me what Michael Jordan was to others my age. As such, Belfast, his new semi-biographical film, was an emotional journey for me.

Belfast takes place in the capital city of Northern Ireland and follows Buddy (Jude Hill), a young boy growing up against the backdrop of the ethno-nationalist “troubles” of the late 1960s. Buddy lives a happy life with his working-class parents, who are never named in the film but are beautifully portrayed by Jamie Dornan (Barb and Star Go To Vista Del Mar) and Caitriona Balfe (Ford v. Ferrari, Outlander) and his older brother, Will (Lewis McAskie).

Buddy doesn’t really understand what is going on in Ireland, only that his parents constantly whisper about it. He loves his home and doesn’t want to leave it for anything—especially with his beloved grandparents (Ciarán Hinds and Judi Dench) so close by. For Buddy, there’s nothing that can’t be solved by escaping into the magic of the movies, whether through Westerns on the family’s black-and-white television set or Chitty Chitty Bang Bang in its full, glorious color on the big screen. But, the men who come by frequently to push his father to make a decision on “where he stands” have a much less carefree worldview.

As a writer-director, Branagh delivers quite possibly the best and certainly the most assured work of his illustrious career. The tightly paced and lovingly drawn Belfast overflows with poignancy, nostalgia, tension and warmth. As a cinephile, I found myself constantly transported to my own childhood—the constant presence of everything from The Man Who Shot Liberty Valance and One Million B.C. to classic Star Trek is really a delight. I wasn’t just watching Buddy and his family, I was watching myself and mine, and the song in my heart throughout the film often translated into literally singing along to the movie themes present in the film.

The performances are wonderful, with Hinds and Dench making a magical pairing as the grandparents and Dornan doing career-best work as the stubborn father character. Balfe is both empowering and heartbreaking as Buddy’s tenacious, terrified mother. Moreover, Hill isn’t just cute and likable as Buddy: He’s a dead-on casting that made me feel like I was seeing the real Branagh as a child. Both the director and his alter ego do an amazing job of making us view the film through a child’s eyes.

The gorgeous, black-and-white cinematography by Haris Zambarloukos is among the year’s best, and the inevitable echoes of Schindler’s List work, adding to the ever-present, unsettling feeling in the tumultuous city and the knowledge that something terrifying could erupt out of nowhere at any moment. Branagh departs from his usual practice of bombastic Patrick Doyle scores and instead sets everything to songs and instrumentals by legendary Irish musician Van Morrison, which elegantly establishes the period.

Belfast is among the very best films of 2021 and beyond, a triumphant and transportive cinematic experience that takes us to other times, places and even inside the movies themselves. It’s a film that I felt privileged to see and will treasure for years to come—a love letter to childhood, family and imagination. –Patrick Gibbs