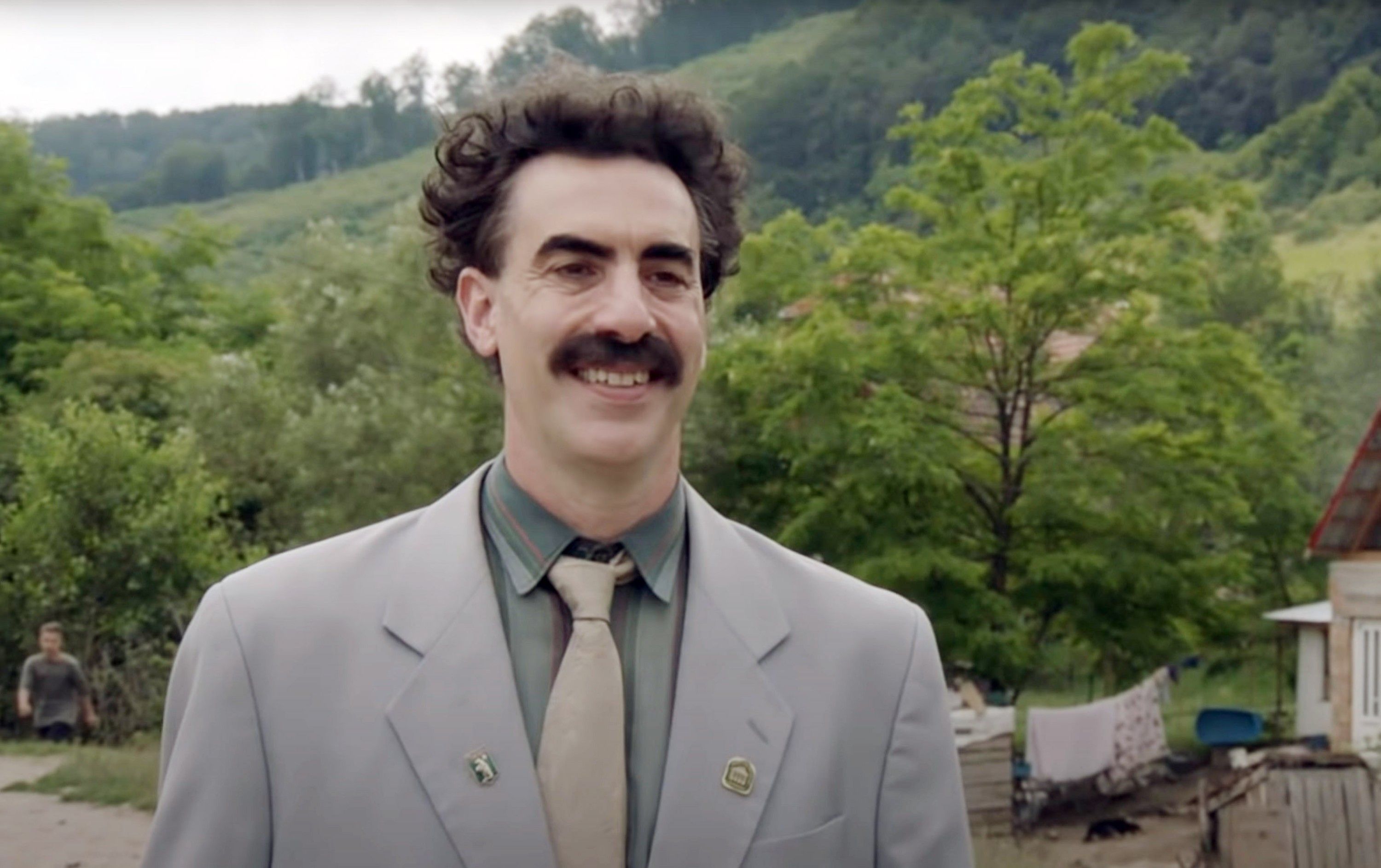 If I’m being perfectly honest, I’m still trying to figure out how I felt about the first Borat film. There is so much about the commitment level and the audacity of it all that I greatly admire, and in many ways, it established Sacha Baron Cohen as a successor to the great Andy Kaufman in being the world’s foremost comedic performance artist. It was also a constant tug-of-war between comic genius and lowbrow stupidity, often at the same time.

The new film, Borat Subsequent Moviefilm: Delivery of Prodigious Bribe to American Regime for Make Benefit Once Glorious Nation of Kazakhstan, is better than the original in terms of fitting together into a cohesive narrative. It’s also more satisfying in terms of character growth and has a much greater sense of urgency in what it is trying to say, in the sense that the most outrageously foolish people we see in the first film were easier to write off as irrelevant back before they started wearing their uniform red hats. But for me, the biggest difference was that I felt the first film started off strong, but by the end, I just wanted it to be over. Whereas this time, the last 40 minutes are easily the strongest.

Kazakh journalist Borat Sagdiyev has been imprisoned by his government for embarrassing the nation with his first film, but he has been released after 15 years in order to embark on a special mission to America to establish good relations between Kazakhstan and the current American leadership by delivering the gift; a chimpanzee porn star to Mike Pence (it makes slightly more sense in context, but not much). Meanwhile, Borat learns that he has a 15-year-old “non male son” named Tutor (Maria Bakalova), who dreams of going to America to live inside a golden cage like her idol, Princess Melania.  Borat spurns her, but she stows away in a crate along with Johnny the monkey in order to see America and get to know her father.

My feelings about Borat Subsequent Moviefilm are all over the place. On the plus side, the commitment level of the actors is off the charts,  and there’s really no overstating how much of an impression Bakalova makes, a breakout star giving a performance that is deserving of an Oscar nomination and is likely to put her in huge demand. The character relationship between Borat and Tutor makes this a far more satisfying storyline than the original Borat, and some of it is surprisingly touching.  There is also some very clever stuff playing off of the fact that, since the first film, the character has become famous everywhere. But while some of the sequences interacting with dyed-in-the-wool Q’anon believers and anti-maskers are bold and in their own way flat out brilliant, I found a lot of it to be as depressing as it was funny, if not more so. And the over reliance on shock value humor was relentless enough that I found the movie tough to watch at times.

There are some great moments, in particular the sequence where Baron Cohen managed to get on stage during a “3 Percenters” rally against mask wearing and gets the crowds enthusiastically repeating lyrics that, to say the least, do not reflect kindly upon them. And while embargoes forbid me from giving away details that are now all over the news, the most talked about sequence featuring a very high profile figure is at the very least a triumphant reminder that we do not yet live in a dictatorship that can prevent you from mocking political leaders. The sequence that has lead to a lawsuit in an attempt to have it removed, on the other hand, is one that fills me with a lot more misgivings. The person involved looks anything but foolish, but I still believe it should have been cut from the film in the interest of sensitivity.

For me personally, the elements of Borat Subsequent Moviefilm that left me with a bad taste in my mouth, which are pretty well personified by the idiotic ad campaign showing Borat wearing a protective mask as something along the lines of a diaper thong—the studio was kind enough to send me one of my own, and unfortunately I am not kidding—are just too much for me to completely get behind the film. I appreciate much of what it’s doing, and as an improv comic myself, my admiration is sincere. But while I laughed at times and was often impressed at it, my overall feeling was one of sadness at the state of things in America. Borat Subsequent Moviefilm doesn’t really expose anything that those of us who are paying attention aren’t already aware of, and I suppose I’m getting old, but there are some things I no longer find funny and others that I’m just not ready to laugh about yet. –Patrick Gibbs