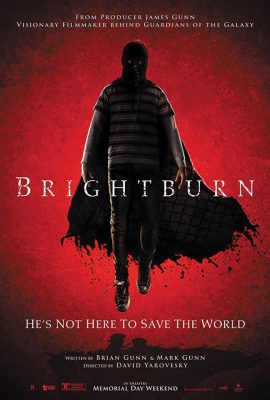 As you witnessed, Superman graces the pages in comic books or soars across the silver screen, did you ever wonder to yourself, “What if, one day, the Man of Steel decided not to be a good guy?” That question is definitely answered in Brightburn, the horrific tale of young Brandon (Jackson A. Dunn), whose space pod crashed near the farmhouse of Tori (Elizabeth Banks) and Kyle (David Denman). Since the couple were having trouble conceiving a baby of their own, they decided to secretly adopt the new visitor and hide the truth of his origins. As years went by, life was peaches and cream for the Breyer family. But it appears puberty sucks just as bad for alien life-forms because, soon after his 12th birthday, Brandon begins to discover his true powers and an urge to defy those who stand in his way for global domination.

Essentially, Brightburn is a simple horror film without an elaborate plot—that is perfectly fine with this geek. We have all seen the god-like strength that comes with superheroes, but to witness them use it to their fullest potential for sinister purposes is not as common. Could they break every bone in your hand with a simple handshake? Yup. Would their laser-beam eyes blow your brains clear out the back of your skull? Absolutely. Director David Yarovesky, with the help of producer James Gunn, brings those grotesque visuals to life like you have never seen before.

I’ve seen many horror films and, most of the time, I am unfazed by the terrifying occurrences projected in front of me. With that said, there were multiple instances during Brightburn where I shouted and/or had to look away for a split-second to regain my composure. Detached jaws and punctured eyeballs are not meant to be seen by the majority of human beings. Sure, there are plot holes from beginning to end, and some of the brutality makes no sense, but the same can be said for some of the most iconic slasher films from the past. This is simply the story of an enraged pre-pubescent with an arsenal of abilities—and we have absolutely no chance of survival. –Jimmy Martin