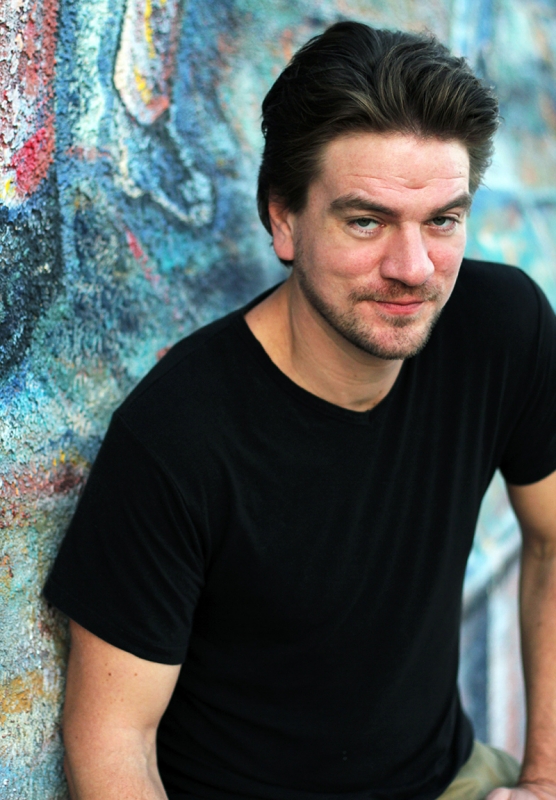 As part of DC Comics’ fall TV lineup, they’ve summoned everyone’s favorite street exorcist/summoner/sociopath John Constantine to get freaky on a weekly basis. Fans of the comics know that Constantine rarely does his paranormal dirty work alone—despite the fact that he tends to take most of the credit. Charles Halford, an actor who grew up in Salt Lake City, has been cast as the role of Chas Chandler, Constantine’s cab driver/drinking buddy/demon hunter. Halford, whose TV work includes HBO’s True Detective and ABC’s Agents of S.H.I.E.L.D., took some time to chat with us about NBC’s new show Constantine, as well as the simple pleasures of taking a punch in the name of the performing arts.

SLUG: You got your start with the Sundance Filmmaker labs. What was that experience like?
Charles Halford: I was into acting before that. I went to the USU Eastern to study theater, but only for a year or so. There were a lot of films being made in Utah, so I decided to try and make money instead of spending it. I knew the Sundance Labs were there and I had a couple of friends who had made some really good connections with directors like Paul Thomas Anderson. I just made it known that I really wanted to be involved. There was a lot of auditioning without getting in, but they finally invited me in on some exercises they did with local actors. I learned a ton and met some great directors that I still keep in contact with. It’s a really good opportunity for local actors if they can get into it. They bring a lot of actors in from out of state, but it’s a great back door for local actors if they can get down there and work with them in the summer. So much of acting is connections—not just who you know but who knows you. That’s what happened with True Detective. Somebody who knew me from the labs had mentioned that they were looking for big scary white dudes, and there I was.

SLUG: It’s quite a stretch to go from a deranged meth-cooker to an agent of S.H.I.E.L.D. How do you prepare for different roles?
Halford: Every job is case sensitive. I think there was a lot more meat to the script of True Detective than there was for Agents of S.H.I.E.L.D. A big majority of my prep on True Detective was trying to find a way to get out of my head and act like I’ve been cooking meth all day, and a lot of it was physical preparation because I knew I’d be running around in a jock strap or bath towel. I was probably in better shape in terms of diet and not drinking—I got into a pretty good training regimen to look like a methed-out child-trafficker. When I read the script, I read up on Carcosa and the black stars and all that. I went straight to the internet to find the classic works of literature and get obsessed with that stuff for as much time as I had to work with it.

SLUG: Let’s talk about Constantine. I understand that the show’s panel at San Diego Comic Con was your first convention experience—what was that like?
Halford: Madness. We were literally shooting until three AM on Saturday morning, and then we caught a flight and lost THREE hours heading to the west coast because we’re filming in Atlanta. As soon as we arrived, it was a blur—get to the hotel, change your clothes, get in the shuttle, drive across town, take photos with these people, sign these things, interview with these people, get back in the shuttle—by the end of the day, I had only coffee pumping through my veins and I was just hoping that my brain would continue to connect. Since it was my first experience at Comic Con, it was fun to spend Sunday walking around and soaking up the convention at street level. Fortunately, I’m in a place right now where I can walk around without getting pestered, which was very different from Saturday when I was walking around with Matt Ryan, who’s the face of the show, and Harold Perrinau who did many years visiting Comic Con because of Lost.

SLUG: It’s become pretty common for TV adaptations of comic books to ground their storylines into the mythology of their source material, but leave room for deviation. Is Constantine going to follow that same story structure?
Halford: From what I’ve read, it seems like we’re really sticking to the original Hellblazer print, which is different than the New 52 Constantine. We’re not disregarding the comic’s existence. What David Goyer and Daniel Cerone said at the Comic Con panel is that we’re jumping into the show where we meet John at the beginning of Hellblazer. There’s no shortage of storylines from those comics that I think we’ll be getting into. I think we’re doing the best we can to have a faithful adaptation of the Hellblazer comics, obviously within the constraints of FCC regulations and that sort of thing.

SLUG: Do you have a favorite Hellblazer story?
Halford: Obviously “Dangerous Habits” is very important and perhaps the most well-known storyline, though I don’t know if that’s my favorite. I really liked the “Royal Blood” storyline which got into Jack the Ripper. I have a harder time finding a storyline that I didn’t like, actually. They had such good authors for that time. The best UK comic book writers wrote John at one point or another. We have really great writers on the show, especially for the genre, and I think that I don’t want them to stick too much to the comic books. We’re going to want to touch on these storylines, but we also have to do our own thing with them. So I’m just trying to be a part of the next chapter of John Constantine.

SLUG:Given the source material, I hesitate to use the word sidekick for Chas Chandler. How would you describe the relationship between your character and John Constantine?
Halford: He’s the quintessential wingman and best friend. I’ve heard a lot of people say that Chas is Constantine’s Robin, and I guess that’s true in that plainclothes, flawed human world. He is a bit of a Robin since he’s there for anything that John would ask for, and he’s certainly willing to take all sorts of abuse so John can keep fighting the good fight. These are two guys that don’t have much in the way of family, so there’s a certain brotherly aspect to their relationship where they know each other well. I think Chas knows John a little bit more than John knows Chas because John is so self-involved (laughs). They’ve been, quite literally, to Hell and back, so there is some interest in keeping that relationship alive.

SLUG: Is physicality a big part of your character on the show?
Halford: I take a decent amount of abuse. I’m prepared to get more physical. I know they were looking for that when they cast me, so I’m sure it will come around. I’ve been trying to prepare physically—been doing some physical training and trying to get limber. I never was much of an athlete, so I feel like I’ve been making up for lost time in terms of what’s to come. I worked with Don Shanks, a stunt coordinator who’s really well-known in Salt Lake, and he gave me some advice. He told me, “I can tell you’re a decent actor because I keep seeing you on sets, but you’re a big actor. And from one big guy to another, you’re not doing yourself any favors by not hitting the gym. You’re a big guy, and they’re going to want big guys to fall down. You’re going to have to take punches and throw punches, and if you’re not ready for that when the time comes, then you might really end up getting yourself hurt—and all of a sudden, you won’t be acting as much.” So I’m trying to be a little proactive on owning my size—finally.

SLUG: Well, hopefully we get to see you get beat up a lot on the show.
Halford: I think you will. I don’t think you’ll be disappointed in seeing me get abuse.

SLUG:A lot of studios have been interested in adapting some of comics’ darker titles—like Constantine, for example. Why do you think the darker, grittier stuff is becoming more popular?
Halford: I think it’s something that everybody knows, it’s something that happens every day, and there are just as many interesting stories in the dark as well as the light. We’re really exploring the darkest corner of the DC Universe. Arrow is dark, but it’s CW dark, which is different. Gotham has a lot of great potential with those origin stories and the type of city that it is. We really scored being on NBC, borrowing Hannibal’s slot for a while, and following Grimm. We’re getting challenged by the network to go darker and edgier and we’re embracing that whole-heartedly because that’s Hellblazer—that’s the world that Constantine lives in.

SLUG: What’s the compromise like between maintaining Hellblazer’s dark tone and complying with network standards?
Halford: Obviously, we’re limited in terms of sex, language, drug content. But they let us get pretty gory, and they definitely want scary. Those are things that fall right in line with Constantine. It’s a fine line. There’s a lot of levity in there as well—it’s not a straight up horror show. I mean, John’s a total bastard. He’s a snarky Brit who gives little to no shits about his friends, and honestly his calling in life. He doesn’t even want to do his job half the time, he just knows that he’s fallen into it. He’s got Heaven and Hell angry at him, and he’s done nothing but piss people off because he’s so selfish—he’s the quintessential anti-hero. So it lends itself to a certain degree of dark comedy. It’ll still be entertaining, but each episode gets continually darker and scarier and grittier. It should be a good horror outing for the Fall season.

SLUG: From one Salt Lake City boy to another, what kind of story could bring John and Chas to Salt Lake?
Halford: Something involving the angel Moroni blowing his trumpet, shaking the Wasatch fault and opening the gates of hell. This reanimates the dead founding fathers to wage war on the Salt Lake Underground. Only one man can save them—John Constantine. He reforms his old band Mucous Membrane under the guise of a Mormon ska band and recruits Moroni. They play the summer concert series alongside Wu-Tang and a lot of blood gets shed. Wu-tang turns on itself, grotesquely dismembering each other, but eventually all the bad guys skank their way back to Hell. Moroni takes all the credit, and John lets him because he doesn’t care—just another day at the office. He just wants to go somewhat he can get a drink without the hassle.