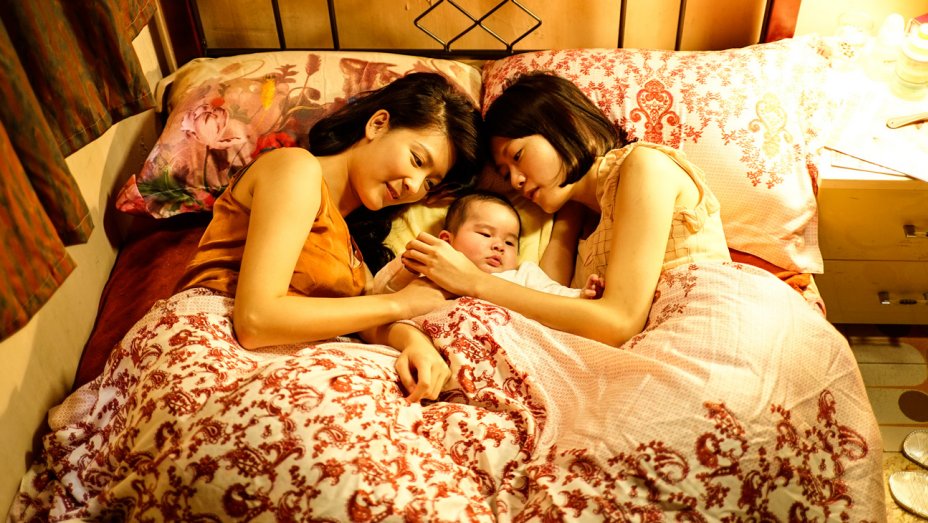 Sisterhood is co-parenting without romance. Sei (played by Gigi Leung as her older self and Fish Liew as her teenage self) and Ling (Jennifer Yu) are two Chinese women without any romantic attraction to each other. Ling bears a child into a family outside its definition—two women who love each other as sisters, bonded from their time as masseurs and each willing to raise a child as partners. It’s a premise that could only play out under a system where two people can struggle, where survival is a narrative that follows logically, naturally. I love Sisterhood for many reasons, but the struggle to survive cannot be overlooked. It is born from a place that doesn’t have to exist, but here we are, watching children, wishing their mothers had more. It’s as though this kind of life were avoidable, as though mothers anywhere didn’t need to suffer as they do now in 2018.

Ling works as a masseuse in a Chinese parlor, years before any law imposed respect for women where handjobs are expected with a massage. Ling is defined by her number, and that becomes an identification between her and her friends—Sei chooses 18 to be next to Ling, 19. So begins the unlikely intimacy between both women.

It’s presented as a frame narrative. Sei, now a Taiwanese citizen, visits the part of China she knew as a young girl, only now realizing the exploitation they faced. Her memories of working as a masseuse are punctuated by real experiences of jerking off men—realizing that a double salary carried the shame of stroking a dick. A reality of men’s sexual expectations drives Sei’s early income, and it’s hard to forget.

I’ve talked about co-parenting with several of my friends. It’s not a wild concept—believe me, you could rear a child without a nuclear family—and yet the myth persists: Everyone’s best chance for success lies in heteronormativity! Sisterhood squirms in this apprehension. We see two women who are not romantically involved rear a baby, and the grease of capitalism is unkind. Whatever quarrel you have with China, well, here we are. Sisterhood depicts how raising a child outside the constraints of monogamy is a concept so foreign, it might as well be from another country. These systems are designed to make this harsh, and as Ling and Cei clash, the grease gets sticky.

As an older Sei visits her friends in the massuese business, we see flashbacks to the inception of Lok, the child Sei and Ling raised for two years. An early scene of Sisterhood shows us Sei and Ling at a New Year’s celebration years ago. Sei confronts Ling about their shared child—their quarrel now a foregone conclusion—about how the child deserves a life well-lived. The two parents argue about that, and it comes to a head during the moment of the new year, the significance of which is certainly not lost on Sei, our protagonist and lens. Long ago, she took on a birthday of her own, deciding her importance to the world. It’s this moment that they split, and a moment Sei returns to continually as she searches for the child in modern day.

Some queer people may wonder why a film like this has a place in queer cinema. Let me posit this: Sisterhood is inherently disruptive. Women loving women, even platonically, can be a radical act. In Sisterhood, it’s nothing less. The product of love is emphasized less than the act of loving outside its defined boundaries, and it’s there, the confused space, that we find friends who exist outside of heteronormative boundaries. –Parker Mortensen