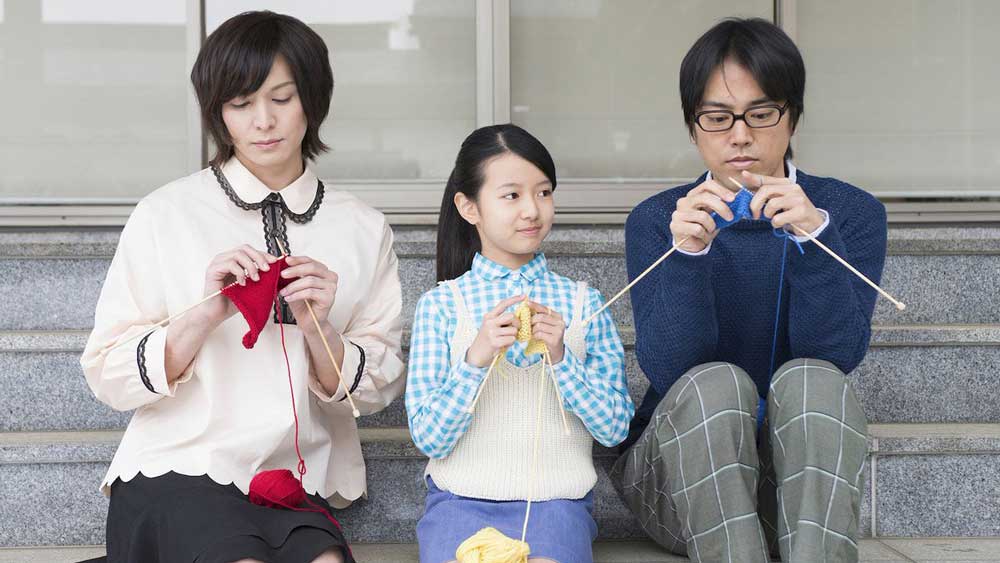 Naoko Ogigami’s thoughtful, pastel-hued family drama Close-Knit follows the self-sufficient and searching Tomo, played by Rinka Kakihara. Tomo is an 11-year-old schoolgirl who subsists on packaged rice balls in the messy apartment she shares with her careless mother, Hiromi (Mimura), who thinks nothing of running off and leaving her daughter alone for days on end. Each time Hiromi disappears, Tomo—frustrated but unsurprised—dons her large backpack and walks to a bookstore. There, she waits for her kind uncle, Makio (Kenta Kiritani), to finish working and heads to live with him until Hiromi shows up again.

This time when her mother vanishes, however, there’s a shift in the pattern: Makio has fallen in love, and he now lives with his girlfriend, Rinko (Tôma Ikuta). A transgender woman, the sweet, gentle-mannered and open-hearted Rinko works as a nurse for the elderly—Makio tells Tomo that he first fell in love with Rinko when he saw the softness with which she cared for Tomo’s grandmother. Rinko immediately adores Tomo, and Tomo, though guarded and confused at first, soon embraces Rinko as a friend and mother figure. Tomo enjoys with Rinko all the close-knit family experiences she didn’t have with Hiromi: Rinko cooks Tomo’s favorite dishes and assembles adorable bento boxes, plays Wii with Tomo and her classmate Kai (Kaito Komie), races bicycles with Makio, and teaches Tomo how to knit—a pastime Rinko turns to whenever she feels angry or “so depressed [she wants] to die.”

That last bit hints at the very real but more difficult conflicts that Ogigami touches on in Close-Knit. Beyond the soft lighting, intimate dialogue, orchestral score and warm family scenes, we see both Tomo and Kai (who confides to Tomo that he has feelings for another boy), already at a lonely and transitioning point in their lives, get bullied, feel abandoned, and lash out—or lash in. In both the present and in flashbacks to Rinko’s adolescence, we see that while she was lucky to have a supportive—though somewhat no-filter—mother, she still faces bitter, day-to-day discrimination, feels self-conscious about the large size of her hands, and has to deal with the bureaucratic barriers that come with being a woman but having “Male” listed on your identification card.

Close-Knit is deeply felt. While Ogigami certainly adds some stylistic flourish throughout, she’s not here to solely wring emotional acrobatics. Instead, with the film’s 127-minute runtime, Ogigami is patient and sensitive as ever in her filmmaking. She’s in tune to the pulse of her arcs, making for adeptly timed and paced moments of upheaval. And while she doesn’t minimize her characters’ traumas or struggles, she centers their shared joy. Brought to life by excellent and compassionate performances from all its cast, Close-Knit is mostly gentle, mostly measured as it weaves through what it means to grow up, to nurture and to love. –Kathy Rong Zhou