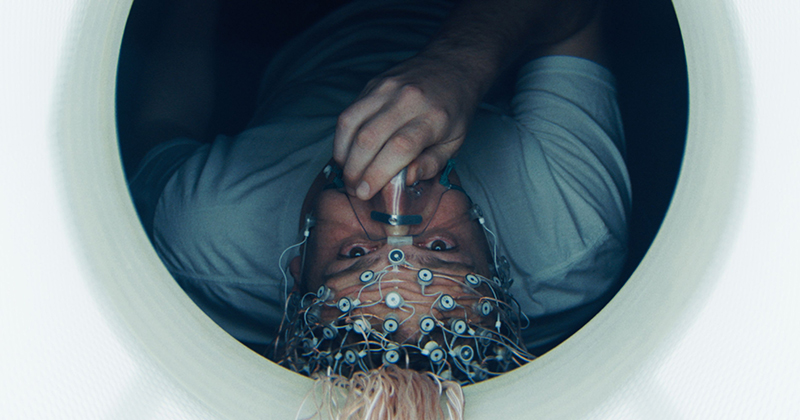 It’s still a bit early to tell if writer/director Charlie McDowell will become the cerebral, pragmatic sci-fi filmmaker that he clearly wants to be. Based on his debut, The One I Love, this would be an easy call to make. While The Discovery is definitely cut from that same metaphysical cloth, it might have been a concept that was too big for a restrained filmmaker like McDowell to completely pin down.

The film begins with a clever bit of exposition that finds Dr. Thomas Harbor (Robert Redford) sitting down to his first televised interview since scientifically proving the existence of an afterlife. His research has led him to detect a departure of subatomic particles from the mind, thus proving that something within us goes somewhere else when we die. Perhaps the most thought-provoking aspect of The Discovery is the fact that, after this announcement, suicide rates have skyrocketed. After a setup like this, I was primed for a story that was going to dig a bit deeper into this great concept. Are people really so disenfranchised with their lives that they would kill themselves for the chance to start over somewhere, anywhere else? What happens to religious leaders who use a faith-based, morally dependent vision of the afterlife to hold sway over their congregations? Instead, we get a half-baked love story set somewhere in between Inception and Eternal Sunshine of the Spotless Mind.

There are worse films for The Discovery to find itself wedged between, and it’s not a bad film in and of itself. The problem lies within the fact that we have a low-concept romantic drama set against a high-concept background. Will (Jason Segel) meets Isla (Rooney Mara) on a ferry to visit Dr. Harbor, who happens to be Will’s father and who has developed a way both to help those affected by the discovery and dig deeper into his research.

By the time The Discovery shifts gears from introspection into the nature of death to misanthropic love story, the audience hasn’t had enough time to build a connection to Will and Isla. The critic in me wants to blame this on the lack of chemistry between Segel and Mara, but I’m not sure that they can take the full blame here—both of them are great individually. Their onscreen romance, however, unfolds with the grace of a cinderblock clunking down a tenement building stairwell because McDowell and co-writer Justin Lader decided to see how much baggage they could actually script for each character.

For those looking to bulk out their quota of films that premiered at the 2017 Sundance Film Festival, The Discovery has enough conceptual clout to qualify as a decent film. Just make sure you know what you’re getting into. –Alex Springer