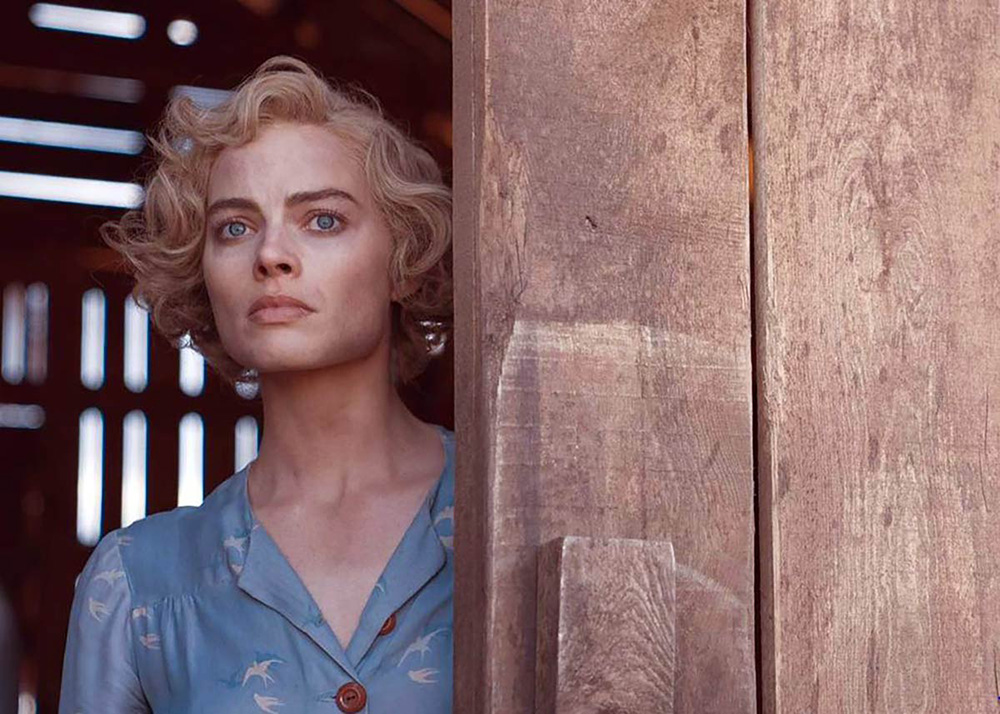 LuckyChap Entertainment
In Theaters: 11.13
Streaming on Video on Demand: 11.17

There’s something about robbery and murder during the Great Depression that makes it forever associated with romance, and when you put it that way, it makes about as much sense as saying that there’s something about a sasquatch with diarrhea that makes it synonymous with roller derby. But Bonnie Parker and Clyde Barrow, through the news media of the time, provided a distraction and someone to live vicariously through for a lot of frustrated and angry people who were feeling betrayed by the economic establishment.

Dreamland is clearly inspired by the Bonnie and Clyde mythos, and there’s something very intriguing about placing Margot Robbie in this setting, almost as if Bonnie Parker was Harley Quinn. But the real protagonist here is a teenaged boy, Eugene Evans (Finn Cole of Peaky Blinders) who dreams of escaping a dismal existence in a small dust bowl of a Texas town.  When he discovers a wounded, fugitive bank robber named Allison Wells (Robbie) hiding out in the family’s barn, he is torn between claiming the bounty for her capture and his growing attraction to the seductive criminal, along with his desire for a new life.

I had high hopes for this film, and director Miles Joris-Peyrafitte (As You Are) and cinematographer Lyle Vincent (Bad Education) definitely know how to paint a pretty picture. But the script by Nicolaas Zwart, whose screenwriting credits consist of one short film and and single episode of Riverdale, plays almost like a very rough draft, as if the concept hasn’t been fully developed yet. And overall, Dreamland hasn’t quite decided on whether it has any particular point to make, or even whose story is being told here.

The tale unfolds through a voice over narration from Eugene’s younger sister, Phoebe, voiced by Lola Kirke (Gone Girl) as an adult and played by the adorable Darby Camp (The Christmas Chronicles) as a little girl. Phoebe tells of her beloved long lost brother and what became of him when the infamous Allison Wells came into his life. I’m not one of those people who believes voice over narration isn’t a valid cinematic device—don’t even try telling me that Goodfellas isn’t cinematic—but this particular narrative style can be tricky, and generally doesn’t work if you take it too literally—the obvious example being Rose telling the detailed story of Titanic, including numerous scenes that she isn’t even in, containing details she couldn’t know.

In this case, the bulk of the story is a combination of Phoebe putting two and two together, and her wistful imaginings of what she’d like to think happened. If you take that entirely at face value, then for some reason Phoebe’s adoration for her older brother makes it comforting for her to imagine him having shower sex with Margot Robbie. When this girl sends out positive vibes, she really doesn’t mess around, and she probably puts everybody else in the family to shame when it comes to picking out Christmas gifts, but sorry, I just don’t buy it. But I also don’t buy some of Allison’s choices in the final as taking place in anything but an idealized version of events, so either way it feels problematic at best.

Dreamland is being sold as a vehicle for Robbie, and while she’s very good, she’s off screen for most of the first third of the picture. Finn Cole is a very promising young actor who happens to bare a strong resemblance to a young Heath Ledger, but I found Eugene’s relationship with Allison to be surprisingly bland. I was far more invested in the scenes between Cole and Camp, which are too few and far between.

Dreamland isn’t unpalatable, but it is woefully undercooked. It’s a mediocre drama that needed a good deal more creative development put into it before the cameras started rolling. Robbie’s involvement is really the only reason it was even made, and presumably she was eyeing a possible Oscar nomination, but she might want to visit an optometrist, because even in the supporting category, I just don’t see it happening with this one. She got a lot more mileage out of her captivating performance in Once Upon A Time in Hollywood with considerably less dialogue and screen time. There’s no question that she’s got everything she needs to be one of the top actresses working today, except perhaps a knack for picking great material. Here’s hoping that another I, Tonya comes her way soon. –Patrick Gibbs