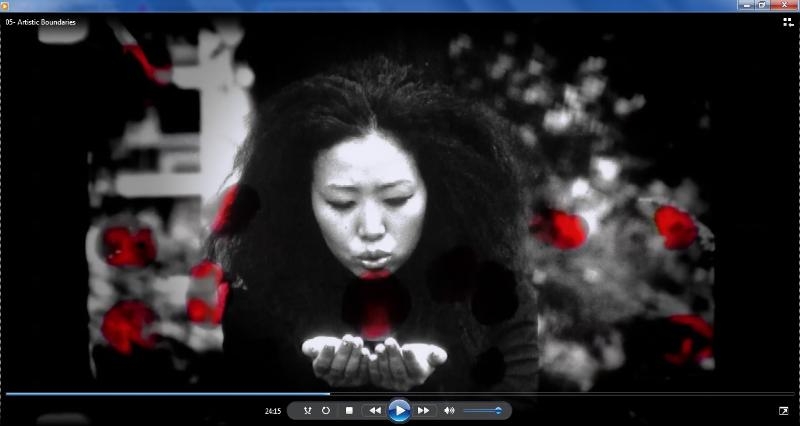 Love in the City finds color in a black and white world.

The purpose of this Fear No Film category was to showcase ways in which filmmakers are pushing the limits of their craft. This type of filmmaking can be a mixed bag depending on the observer as it forces the viewer to look below the surface of what’s happening on the screen and begin to focus on the “why” rather than the “what.” In a cinematic landscape like our own, a lot of focus is placed on computerized special effects and motion capture technology. Though these innovations are taking film boldly into the future, it’s refreshing to see independent filmmakers going back to old tricks like stop motion and film exposure to convey their creativity. The films that follow definitely explored new territory as to what films are and what they can be—some better than others, however.

TAG (France)
Directed by Pierre Cattan
The concept of TAG is disarmingly simple. After the people of Paris freeze in place, there is only one person in the whole city who can move around. The moment they touch someone else, that person is granted mobility while the person who did the touching in the first place remains frozen. The film runs through several different actors as they are “woken up” by the intentional and unintentional contact that they receive, and each one of them manage to create a realistic character for the brief moments that they’re on screen. The beauty of a film like this is its ability to be pored over and discussed—each viewer is going to get something different. For myself, I found the premise to be a bit melancholy as it alluded to the idea that we’re all alone in our respective communities, and to touch someone else is to sacrifice our own mobility. In contrast, it could very well be illustrating how lonely life would be without the constant presence of everyone else. Definitely one you’ll have to check out and interpret on your own.

Virtuos Virtuell (Germany)
Directed by Thomas Stellmach & Maja Oschmann
Set to Louis Spohr’s Alchemist Overture, Virtuos Virtuell is the type of animated film that needs to appear on a reboot of Disney’s Fantasia. Spohr’s music is interpreted by a series of inkblots that stream, splash, and dance their way across the screen. The stark black and white color scheme allows the viewer to focus on the impressive amount of detail within the animated ink as it bleeds and smears into the canvas. When a film manages to effortlessly capture a few moments of simplistic beauty, it’s a safe bet that the filmmakers were actually working around the clock to make it happen—it’s a gorgeous piece of work.

Love in the City (New York)
Directed by Emanuele Michetti
Emanuele Michetti’s short about urban romance does some fascinating things with the medium of film. The movement of our principal characters appears to be done with a type of stop-motion while the world around them moves at its regular speed, implying that love can yank a person out of sync with the rest of the world. The black and white color palette and choppy editing reminded me of cinema in the early 1900s, which was a cool contrast to the modern world that was depicted on screen. Also, there were more vehicular assaults than I would have expected in a film about love in the city, which is another apt metaphor for what love can do to a person.

One Little Accident Away (Canada)
Directed by Diana Piruzevska
I’m tempted to call One Little Accident Away a music video, but the more I think about it, I don’t think that’s an appropriate description. Yes, our characters are all singing a song about a couple that is allergic to taking responsibility for their actions, but the way the scenes are staged reminds me more of a musical. As the leading man of the film, Jeff Gladstone is infinitely watchable as he croons his way through the tale of his accident-prone relationship, and the quirky production design gave the film a hazy sort of nostalgia.

A Journey Far Away (Netherlands)
Directed by Kurt Platvoet
Many of the entrants in this category have distinguished themselves with their lack of dialogue, which is a staple of filmmaking. Some films have used this lack of speaking to interesting effects, and I’m always intrigued when a film can tell a visual story without having the characters actually talk to each other—especially when that story involves sentient body parts that detach themselves from their host to live lives of their own. Kurt Platvoet’s Freudian introspective look at a man who discovers that the smaller parts of his body have decided to jump ship is just as weird as it sounds. As there is no dialogue between characters, the job of characterization comes from Toon Habraken’s brooding, string-quartet music that effectively captures the confusion and frustration of the film’s characters.

Safer in the Dark (Spain)
Directed by David Pantaleón
I know that somewhere, right at this moment, a film professor is extolling the cinematic virtues of David Pantaleón’s Safer in the Dark—but I just did not connect with this one. Two deer hunters called The Handsome (Jonathan Efrén Quintana Quintana) and The Good (Domingo Oliver Quintana Quintana) lead a third called The Blind (Amado Fermín del Rosario Hernandez) into the woods to hunt cardboard deer. The scenes of these three hunters traipsing through the wilderness are punctuated by various people standing against a wall with deer antlers pasted to its surface—so they look like deer, get it? Each person moans in a way that I’m guessing is supposed to sound like a wounded deer. Based on my interpretation of the film, I’d say that Safer in the Dark is packing an underlying commentary about the fragility of life—but that’s meeting it a lot more than halfway.

Despite the subjectivity of the word “artistic,” the films in this category had a clear vision of the boundaries that they wanted to push, and each one did so as accessibly as possible. It’s amazing how the medium of film has been around for so long, yet people manage to discover a new way to set up a shot or a new way to manipulate the film during post-production. Though a few films in this category didn’t quite strike me as spectacular, it was still evident that the filmmakers were trying something new, which is praiseworthy in its own right. It takes guts to take an artistic vision and present it, uncompromised, to a world of critics.